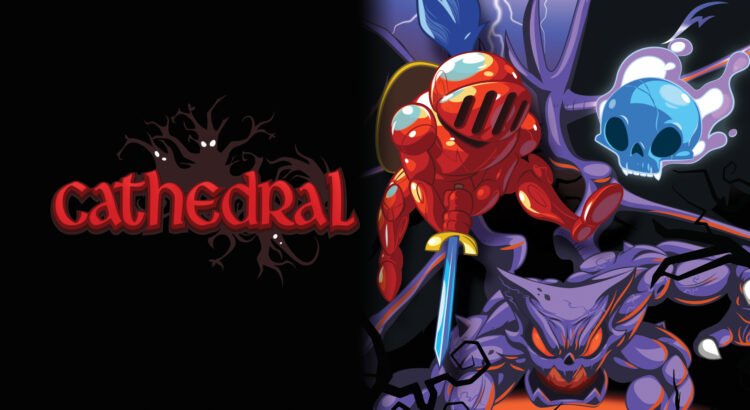 At first glance, I wouldn’t blame you if you overlook developer Decemberborn Games’ Cathedral for a mere Shovel Knight rip-off. Truly, by just looking at its screenshots it certainly seems to play that part, thanks to how similar it seems to Yacht Club Games’ hit retro side-scroller. Things do turn out way differently if you do indeed start playing it, though. Cathedral has more to do with the likes of Metroid than anything else, really.

You might be thinking of adding a slice of Castlevania: Symphony of the Night to the mix that is Cathedral, but because of one of its main blemishes, namely its weak map design, it’s way hard to keep track of or tell how much of it there’s really left to explore. The actual cathedral in the game is as huge if not bigger than Dracula’s keep, with hundreds of rooms to run around in, so that’s an issue that makes getting lost in Cathedral a constant instead of a mere accident.

Playing as a hapless silent red armor wearing knight, you start out with a sword and can either attack whatever’s a short distance in front of you, or stab down when jumping. Along the way, you gain access to a shield and a crossbow, which open up more options to defend yourself, not to mention tools to make further progress in the maze that is the game’s main dungeon. I’m calling the cathedral that because there’s a lot more to explore outside of it, but those areas that include a town serve more of an auxiliary purpose in providing you shops to spend your hard earned gold in, as well as quests to partake in.

These help make Cathedral more of an extended adventure than merely taking on level after level. There’s room to beeline your way through the game for sure, but it’s way more rewarding to really explore its world and find every single one of its secrets before calling it quits and putting Cathedral aside. At the time of this writing, I’m far from reaching that mark and am still enjoying it a whole lot.

True to its retro roots, not only does this game look like an oldie, which has been par for course with a lot of indie games, even though there’s a little less care than I would’ve liked when it comes to background and foreground elements, something that can get in the way of playing. The game can also be quite difficult in both platforming and combat. There’s some devious enemy placement that will definitely keep you repeating some sections of Cathedral over and over until you get some muscle memory working. The checkpointing here could also use some work, since there’s quite a distance between some of them during the tougher sections in the game, while in others, they’re way too close and unnecessary.

Like Shovel Knight, Cathedral features a pretty great soundtrack. The main tune that plays in the main dungeon, the cathedral, is really catchy, as is the town theme. Some notes can sound a little too close to the former’s, but then again, there’s only so many blips and bloops you can put together to compose these joyful fanfares without making them drone on. Coupled with the neat albeit mixed results of the retro-inspired visuals, Cathedral’s a sharp game to play either portably or on your TV screen now that’s out on Switch.

If you’ve been reading Entertainium for a while, you probably know that I’m a sucker for games that are easy to grasp, with plenty to unlock and keep playing on and off for weeks. Cathedral nails both of those really well. Issues with the map and its spikes difficulty aside, I’ve really been enjoying making slow but sure progress in this game, and am looking at keeping it in my Switch go-to library for quite a while.