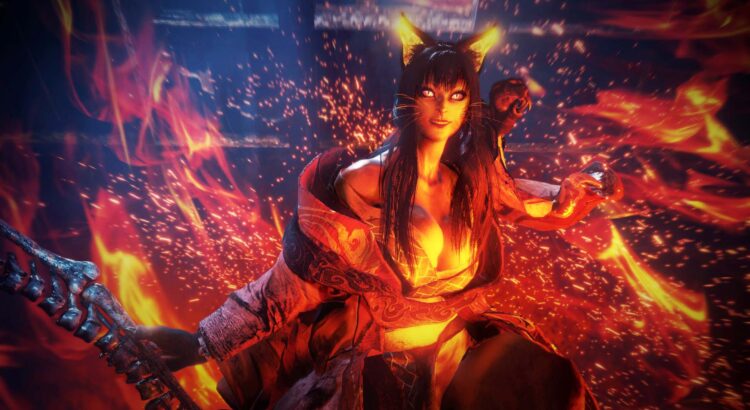 Truth be told, if I had to pick my favorite out of all Soulslike or similar games, Koei Tecmo’s Nioh would probably be it. Even though it definitely messed things up badly the end with some incredibly unimaginative boss fights, its unique mix of Dark Souls gameplay mechanics and tight, lightning fast action very akin to the studios’ own Ninja Gaiden helped make it one hell of a time overall.

Sadly, thanks to some hardware woes last year, I missed Nioh 2‘s initial release window and only got to finally play it around november. Thankfully, anyone who’s like me and have yet to sink their teeth into this for one reason or another is getting a great deal with Nioh 2: The Complete Edition, a DLC packed version of Nioh 2 that’s being released on PC, PlayStation 5, and Xbox Series S/X.

Nioh 2 picks up where the first left off and builds upon it in some very fun ways. For starters, you basically play two characters in one due to the custom protagonists’ demi-human nature that gives them the ability to briefly turn into an oni during combat. It comes into play as both a defensive as a counter to special enemy attacks and offensively, by equipping various yokai souls and borrowing their powers.

Things get even more interesting when it comes to the weapon set you can get your grubby little hands on. The mainstays from Nioh make a return along with some neat additions, chief among them the two that came in the form of DLC via the season pass: a set of bladed gauntlets and the switch staff. For the majority of the first entry, I stuck with the kusarigama, a blade with a chained weight that ended up giving me the ninja speed that I wanted.

In Nioh 2, I decided upon a hand to hand approach, mimicking my favorite Diablo 3 class, the monk. And it’s goddamn amazing, since it’s not only fast, but an absolutely deadly weapon that makes it worth investing in ki regeneration so the combos can just keep on going.

The main drawback that many people might have found playing Nioh was probably its very steep difficulty curve, and that’s still very much present in this sequel. Like the many Souls games, Nioh 2 also benefits from your experience through repetition, making it very rewarding if you put the time to learn its ins and outs. And yes, a lot of it hinges on falling into the many cunning traps laid out by the developers, like tricky enemy placement and attack patterns. If you’ve spent any time with the first Nioh, the same level progression applies here, with missions being split into main story progression, side content, and the occasional wave after wave demon horde, my personal favorite. Not really!

Nioh took some poetical liberties with Japanese history during the course of the game, pitting you against some of the biggest names from feudal times; this time, though, things are a little more fantastical and the boss designs get really cooky, taking it to a more mythological spectrum, which fits in well considering your character is ultimately a demon themselves. There are still a number of human enemies to fight against, and that’s perhaps the shortest draw out of Nioh 2, since it basically borrows a lot of the old designs from the previous game.

Technically, the PC version of Nioh 2: The Complete Edition is pretty damn nifty. My machine which is far from top of the line — an i7 7600k, Radeon 970 with 16 GB RAM — is able to run it quite smoothly, but if you’re with a more capable rig than mine, you’ll be able to really push the game up beyond what you’d get on the original PS4 version. New console users that own the previous version of Nioh 2 can upgrade to this new package, which depending on their territory might require a fee, as well as carry over their progress.

There’s still a fair bit of the game left for me to explore, but what I’ve got to spend in it so far I’m impressed with how close it sticks to the original’s flight path. While many might consider that to be a negative in the way of it lacking a flavor of its own, it’s a great thing for Nioh 2. The new aspects that it brings to the table, mainly the dual nature of your character is but an added layer to the incredible foundation left by the first game.

As recently reported, this is to be the last entry in Nioh, and while bittersweet, I couldn’t think of a better way for Koei Tecmo to sing us out on. Nioh 2 sure can be mean at times, but like the best games, it gets better the more you keep at it.