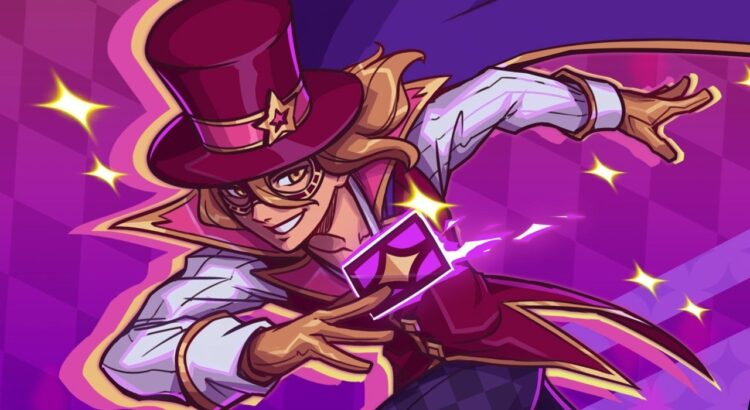 Developed in Sao Paulo, Brazil by the indie studio Mad Mimic, Dandy Ace is a roguelike with a bright and breezy magical theme. Before pulling any rabbits out of hats, however, it is important to deal with the elephant in the room: this game is very similar to Hades.

In 2020, the final release of Supergiant’s magnum opus was one of the biggest stories for videogames during that first harrowing year of the pandemic. Hades had won plaudits and fans during its lengthy spell in early access, but it stepped things up a gear upon completion. At one point it seemed as if everyone was playing it, Twitter was suddenly awash with fan art of Zagreus and the rest of the Greek pantheon, and the game shifted over a million copies. Roguelikes are now a very common genre indeed, but Hades stood out from the crowd.

For its part, Dandy Ace will be largely very familiar to anyone who tried to escape the underworld last year. It has the charismatic protagonist, the quest to escape an ever-shifting prison, the permadeath, the need to select powerful synergies of skills, and the “just one more run” addictiveness. The question is whether Mad Mimic’s game does enough to stand out, and to offer something special to the potentially jaded and overstuffed fans of indie roguelikes.

Happily, the answer is “mostly, yes”. It may be more modest in scope than some of the big hits of the genre, it may be less distinctive and memorable in its visuals and sound, but Dandy Ace is a consistently entertaining and carefully-crafted piece of work. Anyone who has enjoyed a recent roguelike, from Nuclear Throne to Crypt of the NecroDancer, is likely to get a lot out of this game. Indeed, its compact length and relatively minimal need to grind over dozens of runs makes Dandy Ace more accessible than most.

The plot of the game, such as it is, is set in motion by its embittered and pitiful villain, Lele the Green-Eyed Illusionist. Unable to cope with the adulation enjoyed by his arch-rival, the superstar magician Dandy Ace, Lele turns to the dark side and employs a cursed mirror to imprison his nemesis. Taking on the role of Ace, the player is tasked with fighting through the various areas which comprise the sprawling palace inside the magic mirror. Ultimately, Ace must triumph over Lele in a final confrontation in the palace’s throne room in order to escape the mirror.

This setup will be familiar to anyone experienced with roguelikes, but it serves its purpose well enough. The voice performances – which are handled by just two voice actors – are amusing and provide a good complement to gameplay. The dynamic between Ace and Lele is interesting, in that Ace is largely unaware of Lele and his burning hatred. To our hero, the palace’s dangers are mostly just a means to test out his new magic tricks, and possibly a chance to buy a new hat.

While the magic theme is somewhat novel, it is in the gameplay that Dandy Ace is more distinctive. Notably, there are no weapons in the game as such – during play, Ace instead builds up an arsenal of four cards, each mapped to one of the four controller buttons. The numerous card options are divided into categories for main attack, movement, and crowd control. In itself, this would provide hundreds of potential options. However, the game goes further – every card can also be equipped as a bonus to augment one of Ace’s main cards, so that the player actually usually has eight cards in their “hand”.

It is in identifying and exploiting these combinations that Dandy Ace really comes into its own. For example, the magic fist – an unusual melee attack – may not seem viable at first, but it becomes formidable when paired with a card that imbues a charm effect that briefly prevents minions from fighting back. Similarly, a card which allows Ace to fire a spread of weak projectiles becomes far stronger when combined with one which imposes a burn effect on enemies – once for each projectile they are struck by. Suffice it to say that the combinations are extremely numerous, and that finding a devastating one is very satisfying indeed.

In addition to progression within a run, as Ace fights his way between locations like a garden, an art gallery, and a banqueting hall, there are also systems for permanent upgrades between runs. Enemies drop two resources, shards and gold, which are used to unlock additional cards which will drop in future, improved healing items, and equippable trinkets with various effects. These are doled out by Ace’s twin assistants who are also trapped in the mirror with him – it’s a tough gig. It is also possible to locate cards in chests hidden within the levels, and to upgrade them by speaking with a specific and elusive vendor.

Dandy Ace does have its drawbacks. For example, the locations aren’t particularly varied, and many fights are easy to cheese by triggering a group of Lele’s minions, backing off, and then engaging them in a tight choke. However, there are extra unlockable difficulty levels, which up the challenge dramatically – in part by making healing harder to come by and minions more deadly. Fans of games like Hades may find this game slightly too simple, but fewer and shallower characters and less upgrades to grind for. With that being said, Dandy Ace is a very competently made roguelike, a fun experience in its own right, and something roguelike fans are likely to enjoy.