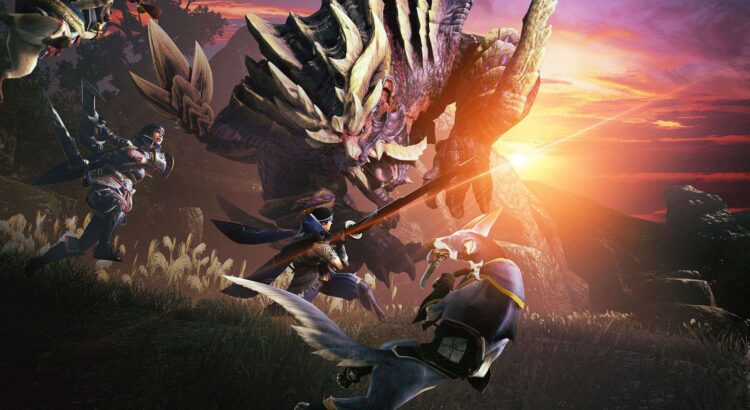 You can stop shouting now. A proper Monster Hunter has finally made its way to the Nintendo Switch and it’s by all accounts a fantastic version of Capcom’s iconic series. For those who clamored for a port of Monster Hunter: World, they’ll be surprised to find an amalgam of different elements from previous entries, along with some of the best features found in that game with Rise, resulting in one of the finest entries in the series yet.

Monster Hunter Rise strips a lot of the fat away from what was already a substantially leaner experience in World, and at the same time, it brings back some of what was best in the portable versions of the game, mainly the Nintendo 3DS that went up to Monster Hunter Generations. Gone is having to scout and discover where monsters are on the map before engaging them, for one. Granted, the investigative portions of World weren’t terrible by any means, they just bogged down gameplay somewhat. So being able to just jump in and get to hunting right away makes picking up and just questing in Rise a breeze.

Getting around is also much faster this time around. The expansion to Monster Hunter: World, Iceborne, brought mounts into the game, but now instead of having to call out one and not being in control at all, you get the palamute, which you can hop on pretty much any time and rush across the map in a matter of seconds. Not only that, but along with your faithful palico partner, the palamute makes for another party member during fights, so to speak. When playing solo, you get to run around with a three-member group, making for a much more self-sustaining composition, which in my case gave me more room to experiment with a wider variety of loadouts and approaches to fights I wouldn’t normally go for in previous Monster Hunter games.

Wirebugs are also a game changer that’s somewhat of a borrowed element from World. Whereas that game’s clutch claw lets you climb up specific set points in the environment, Monster Hunter Rise’s solution is much more freeform, basically giving you two charges much akin to a certain superhero’s web-slingers that work on a cooldown. You can use these to traverse the world with relative ease, as well as close the gap during fights, which coupled with the mount changes makes character movement extremely fun in Monster Hunter Rise, both in and out of combat. Just exploring and dicking around the maps is so much easier now, turning even the most straightforward of item fetching missions a cinch to complete.

Mission structure wise, Rise is a different beast from World. While all quests — outside the ones with very specific requirements — could potentially be completed with an online group in the previous game, they’re split up into two hubs in this new entry. Village quests can only be tackled solo, as part of what little there is of a story to the game, and the bread and butter of Monster Hunter, the ranking missions, are to be played with up to three other players. That’s how the portable versions of Monster Hunter used to play before World, but before you raise a stink, hear me out! It’s better this way.

With a questline specially designed to be finished in single player, the balancing in Rise works very well in serving as both an introduction to the franchise as a whole to newer players through a laundry list of optional tutorial missions, and as a way to get you on your feet quicker in terms of gear progression. The mandatory and urgent missions will get you plenty of materials to craft the weapons and armor even series veterans will need when jumping in online. This in no way forces you to “just get it over with” before trying your luck in low and eventually high rank, though, since you’re free to do so at any time, but I wouldn’t recommend it. And as an added benefit to seeing credits in single player, license missions pop up that can get you up to the better and higher ranked online quests much faster than simply starting from scratch.

I admit, I didn’t like this at first, but after playing and beating Monster Hunter Rise’s solo content after around eleven hours or so, I’ve definitely turned around and feel much more prepared for online. The kick up in difficulty when playing in groups doesn’t seem as hard as in other Monster Hunter games either, especially after growing accustomed to the new gameplay twists playing around in single player. In the end, it’s up to you whether or not you’d want to ignore the more easygoing pacing of the village quests, just don’t be surprised if you get creamed like this guy.

As mentioned before, there isn’t much in the way of a story to Monster Hunter Rise, even less than the usual Monster Hunter game. It’s been 50 years since the Rampage occured in Kamura, where monsters seemingly went berserk and razed the village, and now it’s bound to happen again as an old enemy reappears. With this, Rise introduces a new tower defense mission type that is thankfully only part of the mandatory village story quests once. These take place in an enclosed arena where you are able to set fortifications in order to fight off a certain number of enemy waves before a bigger monster pops up and tries to break through the village gate.

Like Monster Hunter: World’s siege quests, taking part in Rampages serves only as a distraction from the rest of an otherwise incredibly engaging game, but it’s not completely useless to partake in. You get bonus items that can only be received in Rampages in order to put towards unlocking new weapon core stat power ups that come in handy such is the case for my current favorite, a water-based switch axe. It’s a decent trade-off for having to deal with Rampages, really.

Obviously, there have been graphical compromises in bringing a Monster Hunter to the Switch, and in comparison to World, it’s no contest. On the other hand, Monster Hunter Rise is easily one of the best looking games on the system, and it runs on a very stable 30 fps in both portable and TV modes. The stars of the show, the monsters, animate amazingly well, and those who popped in World didn’t lose any of their charm in the transition to Rise. Models look expectedly blurrier and less detailed, but thanks to the series’ usually brilliant art direction, the presentation in Rise works wonderfully.

Kamura Village is an awesome hub to run around in, too. It’s warm and inviting thanks to its cast of humorously written denizens, and for as small as it ultimately is, Kamura is a great balance of function and form. You’ll find it to be very quick to get to just about any of its sections, and given that there are virtually no loading screens at all in Monster Hunter Rise, getting in and out of quests is very snappy. You can totally forgo running around and just stick to selecting where to go off of the menu, that works too, but you end up missing out of the overall atmosphere.

In the grand scheme of Monster Hunter, Monster Hunter Rise is an incredible option to anyone seeking to get into the franchise or for returning players seeking to add even more hundreds of hours to their tallies. The combination of the best elements from both old and new games in the franchise makes this easily one of the strongest and most enjoyable entries in the series. Given Capcom’s support for World, higher ranks like master and G-rank are sure to follow soon and complement Rise‘s base content, so there’ll be plenty to chase after for quite a while.