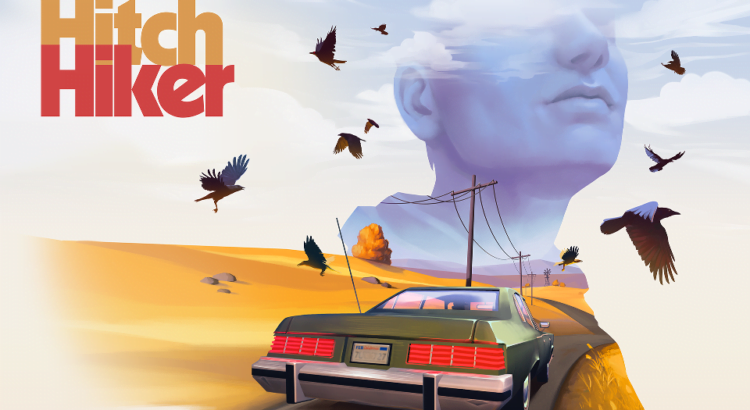 I’m often a fan of games which leads the player at a leisurely pace. Indeed, it’s part of why I so enjoy walk-‘em-ups (or walking sims) as I’ve been known to call them. Games can be good for excitement, adventure and really wild things, but they can also be beneficial for unwinding or learning, especially given the current state of the world. Hitchhiker takes you on a cerebral car journey across the US, transporting your character to the innermost reaches of their mind.

Hitchhiker is a game about conversations, about chatting to different people through the tedium of a car ride. The game is split into 5 acts, each of which has you conversing with a different person in their car. You take the role of Copernicus, a hitchhiker looking for… something. And everything. Part of the draw of the game is to uncover the history of your character, piecing together the jumble of fragments until it starts to make sense. Hitchhiker trades heavily in allegory, and it won’t be too long before you start to realize that there’s a good deal of magical realism going on as well. Vern is a raisin farmer with a fondness for the radio show Riddle Hour, while Hops is a university professor looking for his lost dog. Each driver explores different ideas and concepts, telling their own anecdotes and stories, from the nature of reality to memory and experience with many literary and philosophical references thrown in (I particularly enjoyed a semi-retelling of Franz Kafka’s parable Before the Law).

The game accurately portrays the reality of a car journey, in that it sometimes feels rather tedious. Although the conversations you have with Vern, Hops and others are interesting, they feel too unreal and fantastical to be taken literally. Everyone speaks like they’ve stepped out of a novel by Gabriel García Márquez, which can be both enjoyable and somewhat irritating. The unreality of it all also grated on me, knowing that because the game wallowed in its own magical dream logic, nothing I could do would really impact the journey. It doesn’t help that the gameplay is also fairly one-note, involving some occasional very simple puzzles interspersed between making dialogue choices. Copernicus never speaks aloud during conversations, but does speak during cutscene flashbacks, which makes me wonder why he wasn’t voiced throughout. Similarly, there is very little freedom, your character being glued to the passenger seat and only able to interact with the objects within arms reach. The ending is also very abrupt, not giving any real closure to proceedings.

Hitchhiker reminds me strongly of Virginia, another fairly divisive story-driven game which has a similar unreality to it, but at the same time a strong artistic flair. It also reminded me of Sunset by Tale of Tales, a game which is steeped in the same languid atmosphere and minimalistic storytelling. Visually the game is quite pleasant with a Firewatch-esque aesthetic, alongside an enjoyable soundtrack which plays during several “scenic breaks” in the story, which give you time to just zone out and enjoy the scenery. Unfortunately for a fairly graphically simple game there are some performance problems, most notably when stopping examining an item, which causes the framerate to plummet momentarily. Likewise there are some graphical glitches, most notably a texture seam problem unfortunately affecting one of the driver’s faces. Hopefully these issues will be patched, but they do negatively affect the experience.

Hitchhiker is a game which explores a lot of ideas, and I certainly commend it for doing so, but it never feels like it manages to go on any deep dives or make any firm conclusions, a lot of the philosophical points being stuff which would be routinely discussed in first year philosophy class (I know this from my own personal experience). It’s a game which doesn’t outstay its welcome and can be completed in one sitting, but the thin gameplay and open nature of the story mean it’s difficult to come away feeling properly satisfied. Hitchhiker can take you on a journey, but even it doesn’t seem too sure where it’s actually going.