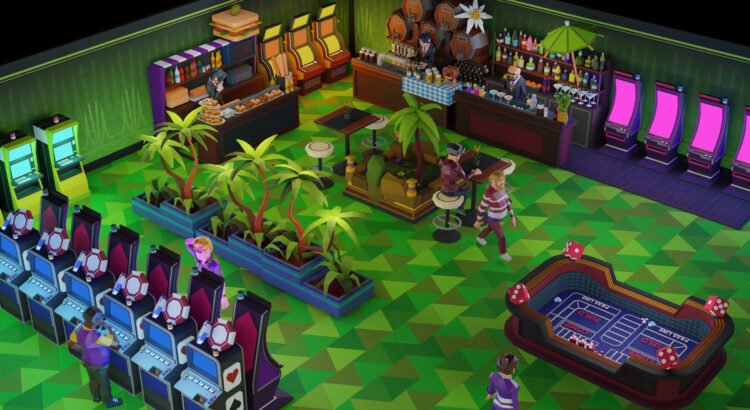 Casinos are something I have very little familiarity with in real life. I have never been to Las Vegas; indeed I don’t think I’ve ever stepped inside a real casino. Plus I view their business model as predatory at best, actively evil at worst. But tycoon games are something I have plenty of familiarity with, from Rollercoaster Tycoon through Railroad Tycoon and Theme Hospital (which is essentially Hospital Tycoon) or Two Point Hospital. Tycoon games usually follow fairly similar formulas, but tend to innovate when it comes to how to achieve your core objective (typically making lots of money). Grand Casino Tycoon does exactly what it says on the tin, giving you control of a myriad of different scenarios and casinos in an attempt to make as much profit as possible. While the mechanics of the game are rather simplistic, the formula of trying to appease your gamblers and make them more likely to hand over their cash is enjoyably addictive.

Grand Casino Tycoon has a selection of casinos to work through, including a couple of introductory scenarios that function as a tutorial (including some enjoyable voiceover from the appropriately money-hungry Casino Director). There’s also the option to unlock a custom casino of your own design once you’ve completed a number of challenges. You’re given control of an empty casino building (in a style very reminiscent of Theme Hospital) which you then need to populate with the various amenities and recreations that gamblers enjoy, including slot machines, card games, table games and so on. You also need to cater for their food and drink needs, as well as making sure there are adequate toilets. Finally, you’ve got to spend some time decking out the casino in ornamentation, so your patrons feel relaxed in their nice surroundings. So far so straightforward, but what makes the gameplay more of a challenge is catering the various types of gamblers.

Gamblers in Grand Casino Tycoon function essentially as robots, with a programmed flow-chart of actions they’ll want to perform. One group for example may want to immediately play slots when they arrive at the casino, while another group may instead hit the bar, followed by a card game. Each group of gamblers has different wants and dislikes, such as the Posh Gamblers who enjoy quiet Video Poker machines and like eating at fine dining restaurants. The Tourists meanwhile love club music and love getting drunk, two things Posh Gamblers loathe. Likewise, each group likes to eat at different quality restaurants and drink at different quality bars. Thus, a good part of the game comes from trying to juggle the needs of various groups of gamblers, attempting to segment them off into various areas of the casino where they’re unlikely to interact with each other. As time goes on you have to try to cater to more groups of gamblers, making managing them more challenging. Each group of gamblers also has a special “VIP” gambler, who will throw various quips and one-liners at you while they wander around.

Before playing Grand Casino Tycoon I’d never really thought about casino design before except for the well known fact that casinos don’t have windows or clocks so you forget how much time is passing. While simplified and streamlined, a lot of the techniques used in the game for designing an ideal “path” for your gamblers to follow must also hold true in real life casinos, to encourage people to get lost within their labyrinthine interiors. There is quite a feeling of satisfaction to be had by perfecting a casino zone, watching the patrons move from eating at a steak buffet to playing baccarat. As time goes on, you can purchase a variety of upgrades to casinos, including unlocking additional games such as Roulette or other improvements such as upgrading the size of music speakers. Outfitting your casino in decorations is very straightforward and the interface is immediately familiar for anyone who has played a tycoon management game before.

There are some problems with the AI though, in that the gamblers are exceedingly dumb and are little more than mindless automatons. For example, if a group of gamblers likes to play the slots first, they will automatically make a beeline for whatever slot machine is closest to the Cashiers desk, even if it’s in an area of the casino they’d hate. The same is also true when guests are looking for places to eat and drink; if it matches something they’d like and it’s closer to them than the destination which was designed for them, they’ll use it. This meant I was regularly having to deal with loud, obnoxious gamblers walking into the zone and using the slot machines designed for the quiet clientele, which upset both groups equally. Juggling space was also quite a big issue; because art items and loudspeakers also take up floor space, a lot of the time I was struggling to find room to place slot machines while also having room for decorations, meaning I had to decide what was more important. Ideally, I’d like to see wall-mounted speakers and wall decorations added to the game in the future. The game is also bizarrely missing any kind of manual save feature; each time I closed the game I kept wondering whether my progress actually was saved (thankfully yes).

Grand Casino Tycoon has a compelling core, and the gameplay of designing casinos while tending to the various needs of competing groups of gamblers is satisfying. The game suffers from a fault which tends to plague many tycoon games, in that after you’ve perfected the layout of the casino and addressed most problems, it does tend to just run itself and make you plenty of money. That said, each scenario has a number of optional objectives which can give players something extra to strive for. After a while I felt it could have done with a larger and more varied soundtrack (the same few tracks tending to loop after a while), and while the AI flaws can be frustrating, they at least follow a logical pattern. It’s not a Royal Flush, but Grand Casino Tycoon does a good job of showing you the truth behind the saying “the house always wins”.