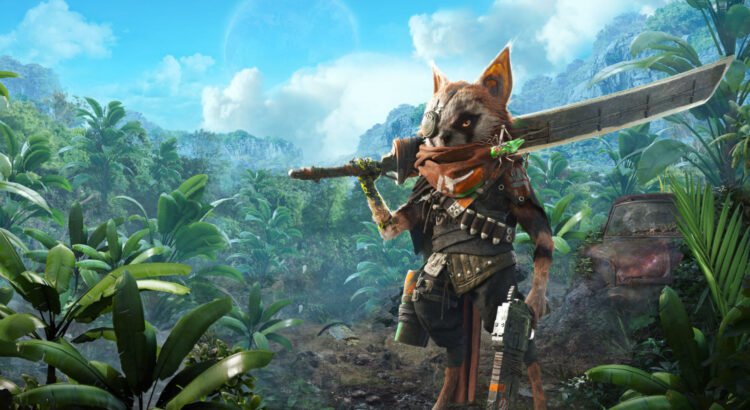 To look at Biomutant, you would not imagine that a game of this size and scale had been created by a team of only 20 people. Yet for Experiment 101’s first game, they have taken many years crafting their own open-world action RPG, complete with many of the trappings you’d normally expect for the genre. While it is certainly an achievement to have created a game of this scope, Biomutant sadly sags under the weight of its various disparate elements, leading to a game which looks gorgeous, but is frustratingly mediocre.

Biomutant is set in the distant future after global warming and ecological disaster have killed all humans (or forced them to flee in spaceships) leaving Earth to the mutated new strands of life. Nature is untamed and unbounded, with plant life rejuvenated thanks to a “Tree of Life” which nourishes the region where the game is set. You play as what I can only describe as a mutant cat-rabbit-racoon hybrid, who strikes a kind of Lone Ranger-esque vibe, as you travel across the land to reunite the various mutant tribes and save the Tree of Life from the Worldeaters; enormous monsters who seem intent on devouring it, potentially leading to complete extinction. Although the story does branch at various points, and the game makes overtures towards a morality system, it trends towards the same ultimate conclusion.

Biomutant’s story is delivered entirely by the narrator (David Shaw Parker), who is almost a sound-alike for the narrator of The Stanley Parable (Kevan Brighting). All spoken lines of dialogue are relayed to you via the narrator, as in-world characters only speak in a Simlish equivalent of vague animal noises. Most dialogue is delivered in a kind of children’s storybook manner, while always being in the second-person (your character never being addressed directly). While the actor does a good job with the lines he’s been given, the fake portmanteaus that have been invented which form the game’s in-universe language is painfully twee, with various everyday objects having been given obscure new names by smashing together two other words. Conversations seem to take double the time necessary, because the narrator has to wait for a character to finish speaking before he can deliver the English interpretation. Likewise, he’s prone to making a variety of repetitive comments during gameplay, such as commenting whenever the sun sets or rises. The narrator’s musings quickly become overbearing given their sing-song, children’s picture book quality, and while his quips can be turned down to happen less often, he can’t be turned off as he is integral to relaying the story.

Beginning the game there is a fairly in-depth character creation system, where you pick characters’ breed, your class, your specialization and assign points to your attributes. These roughly align with the traditional character traits common in many RPGs, but some have different benefits, such as granting you resistances to certain types of damage. Changing these attributes will also physically affect how your character looks, with low-strength, high-agility characters being wiry and nimble, while high-strength being more burly. You can also choose to specialize in certain types of weapons, although all characters can craft all types. Likewise there’s also a speech skill, although I struggle to remember it being used regularly.

Gameplay is a mixture of combat and exploration. The combat is mostly reminiscent of the Devil May Cry games, but is a lot more lightweight. Your character is a master in “Wung Fu” and can equip a variety of weapons, both ranged and melee, and can unlock new skills, attacks and special powers as the game progresses. It is fairly easy to play and does not require memorizing long button sequences, but it feels quite under-baked and lacks tactile feedback; the animations sometimes not really telling you when your character gets injured or when you successfully hit opponents. Likewise, you can’t lock on in order to focus on a particular enemy, so you have to sometimes swing the camera around to keep your quarry in view. There are really too many systems involved in combat as well, as the game has various skills which can be levelled using different currencies, along with an in-depth crafting system which allows you to create new weapons and gear. I often found myself struggling to remember which system upgraded what, as the menu system is a labyrinthine assortment of sub-menus containing different stats and info. One menu controls your mutant abilities, while another controls your gear, and another controls your perks, and you can’t always easily swap between them. Likewise crafting also takes place in a different menu, meaning having to navigate somewhere else to equip gear after you’ve crafted it. Because of this, I found myself regularly double-checking whether I’d actually remembered to equip my latest crafted item. Overall combat is proficient and can certainly look cool on-screen, but I didn’t actively enjoy it on its own merits.

Exploring the world is generally more enjoyable, as it plays to Biomutant’s biggest strength: its art and character design. The world feels constantly teeming with life and colour, the forests and mountains gorgeously rendered. The characters are also a delightful mixture of bizarre and grotesque, being mutant, bipedal hybrid versions of many animals that roam today’s Earth. From the various character classes you can play as, to the ferret dressed as Elvis Presley, to a rat-like tribal leader dressed as a king, all of the creatures of the world look unique, despite the fact that you never really view them as characters in the traditional sense. While exploring the world you’ll encounter the ruins of the previous human civilization scattered around, as well as villages populated by mutant creatures and various bandit camps that need clearing out. There are also plenty of chests with loot to be plundered, which in turn can be used to craft a wide assortment of items, including fashioning your own amalgam of weapons using various parts to jury-rig them together.

Biomutant suffers from one overriding issue, primarily being what I call the Mad Max problem after the aforementioned game; A big open world with nothing interesting to do in it. Most of the open-world gameplay is busy-work, including a variety of tick-box side quests which felt like pure filler, such as finding a number of items from a checklist. There are Far Cry-like camps which need to be cleared of enemies, and the sequence of missions you have to go through to unite or destroy each faction doesn’t really change. Similarly the puzzles which are peppered into gameplay are exceptionally basic, the main one being a rotation, colour-match “hacking” minigame which is usually impossible to fail. These same elements are then re-used, over and over. When coupled with the underdeveloped combat and frustratingly whimsical narration, it all blurs into a forgettable mush.

Biomutant certainly has character, and plenty of it, but character alone cannot carry a game of this size. While the world is gorgeous and the creatures which inhabit it are always bizarre and fun to look at, the lacklustre combat, painfully laboured story, and tedious open world gameplay substantially hold back the experience. Biomutant has the coat of a unique experience, but underneath that coat is a game which is a true jack-of-all-trades, with a bevy of additional systems which add very little to proceedings. It’s fun to enjoy the world and its many colours for a few hours, but any more than that and it becomes a rather dull and tiresome slog. Biomutant is far from a bad game, but it never quite manages to be a good one either.