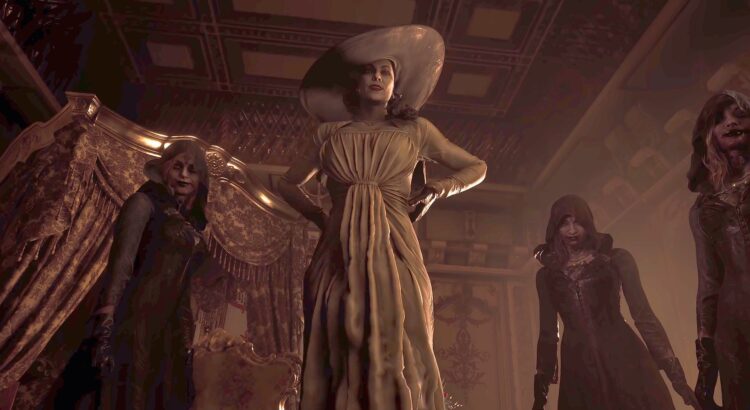 Throughout my time playing Resident Evil Village, I couldn’t get the thought out of my head that it’s basically a theme park. Everything in this game is so compartmentalized from top to bottom, and like any theme park, there are bound to be some rides that you love and a few that you will want to get off as quickly as possible.

Resident Evil Village is a direct sequel to 2017’s Resident Evil 7, set three years after the cataclysmic events that took place in Louisiana. The Winters now live under the protection of Chris Redfield and even have a baby daughter. This being Resident Evil, things were bound to go wrong, and they do quite epically when the game opens, with their house being attacked by none other than Chris himself, resulting in the abduction of baby Rose and Ethan, the protagonist.

As Ethan, you wake up in the middle of nowhere, next to the crashed van you were being carried in, with no sight of his daughter. The snowy landscape quickly shifts to a sleepy village, where all hell breaks loose and Ethan’s life is once again thrown into the blender as he fights to rescue his kid and figure out just what is going on.

Like Resident Evil 7, Village (VIII-lage, get it?) is played from the first-person perspective and is just as tense. In many ways, the eight numbered Resident Evil is an extension of what came before it, and also suffers from the same issues, namely the reliance on balls-to-the-walls action and not on the established trademark survival horror that the series is known for. This game would be best be called action horror, really.

Then again, the rides aspect I touched upon in the opening gells with the overall structure of Resident Evil Village. I might be complaining about there being way too much action in the game, but there are truly amazing psychological horror moments in it as well. The much publicized Lady Dimitrescu stars the first of these, and her section is perhaps the one that feels more akin to what we saw in 7, with her constant presence looming above you like old Jack Baker, only this time in a castle, as you search every nook and cranny for a way to escape.

But perhaps my favorite spot in the game comes right after that, when Ethan steps into a mansion. I have a thing about creepy mansions, and I was definitely triggered by this segment from the game. It undeniably borrows from P.T in just about every way, and the less I talk about it, the better. Safe to say, it builds up a ton of tension and it really pays off. And like the rest of my favorite rides in the Village theme park, it doesn’t overstay its welcome, allowing you to complete it in a sitting or two.

In its review, I talked about how Resident Evil 7 fell apart half way through, and it’s disappointing to say that Resident Evil Village also kind of follows the same line. Once Ethan’s inventory basically turns into an arsenal, the game pivots into becoming a shooting gallery, and for as atmospheric as it is at all times, all tension goes out the window. In its place, you’re dealt with waves of enemies to mow down and annoying level design to navigate in the last couple of areas you visit.

The last of which had plenty of potential to be one of the best, but thanks to the fact that its map is split into levels you take an elevator to, not to mention a lot of backtracking, make it more of a chore to get through than anything. That, coupled with how every single one of its scared is signaled miles before they actually occur, absolutely kills any chance of feeling the intended tension.

Every single piece of preview footage for Resident Evil Village made it seem like it would be very close in feeling to the classic (and soon to be remade) Resident Evil 4. That’s even clearer when actually playing it, due to there being a merchant and treasures to sell, not to mention the weapon upgrade system found in the evergreen game that starred everyone’s favorite rookie cop.

The village setting is an obvious nod as well, and through logs and journals, other parts of Resident Evil lore pop up to tie this game to the rest of the series in a much more overt way than 7 did. Sometimes a little too overt. Couldn’t there be a less obvious way to make the connection with Umbrella than how it’s done here? There’s no way you won’t see it when you get to it, really.

Resident Evil Village might be a crossgen game, but older generation consoles owners don’t lose much this time around. Except for some pop-in, the game plays beautifully on PlayStation 4, and it’s also bears mentioning that even if you buy it on an older gen, you can bring it over to the new one for free.

I wouldn’t say Resident Evil Village is a bad game in any way, but it’s clear that it suffers from the uneven quality of its sections and the overreliance on over-the-top action. I long for a truly creepy Resident Evil game that sticks to being scary like the best moments in this and in 7. Would that really sell? I would be all over it and I’m sure many others would be, considering the popularity of psychological horror games like Amnesia: Rebirth, Outlast, and Slender: The Arrival. But will that happen? I certainly hope so. Until then, we can keep replaying the first half of both Resident Evil Village and Resident Evil 7, I suppose…