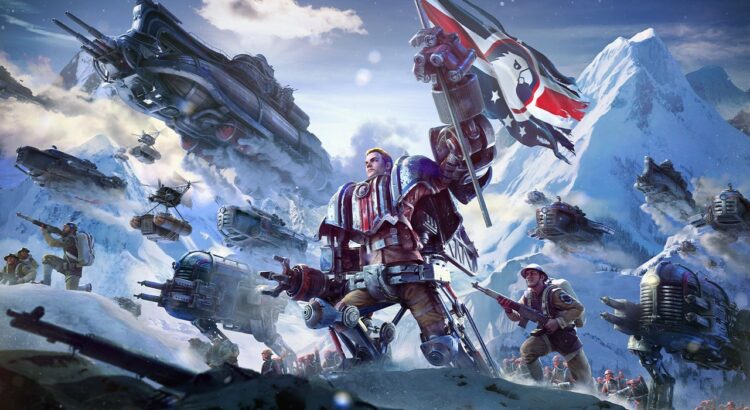 Iron Harvest, the Dieselpunk mech-based RTS which was released late last year, has had a fairly successful time since release. Its first bit of DLC, Rusviet Revolution, covered the 1920+ universe’s version of the Russian Revolution, in a short, bite-size campaign without introducing any new units or gameplay. Now, Operation Eagle has airdropped onto the scene, introducing an entirely new faction in the form of the Union of Usonia, the game’s equivalent of the United States. Operation Eagle doesn’t particularly change the Iron Harvest formula, but it does add another very enjoyable campaign, complete with the introduction of air units for all factions.

The campaign of Operation Eagle follows Captain William Mason, an elite member of the Union military who is airdropped in as Usonia quietly invades Alaska (as in this universe, the Alaska Purchase of 1867 never happened) on the pretext of securing Union business interests in the region, while Rusviet is struggling with the after effects of their revolution. Later the action shifts to Arabia and focuses on the civil wars erupting in the region, with the local populace attempting to break free from the colonial legacy of the Saxony Empire. Overall the plot is just as enjoyable as the main game campaigns were, and adds another well produced, story-driven experience complete with theatrical cutscenes, the gameplay of which gives you an understanding of how Usonia plays compared to the other factions.

Speaking of which, gameplay by and large hasn’t really changed from the core Iron Harvest structure, with missions still being a variety of streamlined base-building combined with capturing resource points, key objectives and enjoying the mission storyline. All the factions now get airships, but they feel a bit lacklustre. They perform a role which is part transportation and part aerial bombardment, and while visually they’re all splendid, their lumbering movement and lack of tactical consideration (as they naturally ignore cover) makes them feel rather like a blunt hammer. They reminded me greatly of the Kirov airships which the Soviet faction was able to deploy in Command & Conquer: Red Alert 3, having the same very slow and stately movement while having the ability to reign death from above. When compared to the visual satisfaction you get of stomping a mech across the map and obliterating a variety of buildings, airships make up for it in terms of scale. It’s nice to have them as an option, but the core of Iron Harvest’s gameplay still lies with mechs and infantry.

The Usonian faction splits the difference between the Saxonian and Polanian factions from the original game, with a selection of mechs which feel appropriately weighty, but with some nice Art Deco styling. Their ethos is that Usonia is the best and the biggest, with a highly funded and efficient military complete with well designed mechs. Mason, as a hero unit, is also very powerful and capable of taking out a troop of infantry single-handed. While all four of the core factions play very interchangeably and are easy to get the hang of, Usonia feels different enough from the others to be worthwhile. In more good news, AI pathfinding appears improved since original release (presumably thanks to patches) meaning units tend to freak out less often when being told to trek halfway across the map.

Visually and aurally the game continues to delight, with the designs of the Usonian mechs looking appropriately bombastic, reminding me heavily of the Brotherhood of Steel from the Fallout franchise. This is especially true of Mason himself, who walks around in what is essentially Power Armor. I believe there are also some new pieces of music added to suit the Usonian style, all of which are excellent, as Iron Harvest’s orchestral soundtrack was one of my favourites from last year.

If you enjoyed the core of Iron Harvest, you’ll certainly enjoy Operation Eagle. Iron Harvest continues to be the foremost RTS game for story-driven campaigns at the moment, a trend which I hope continues. If this is a sign of things to come, future expansions could see even more factions introduced, which will open up the multiplayer component (something I must confess I’ve barely touched) to greater audiences. I look forward to seeing more of the universe of 1920+ unfold.