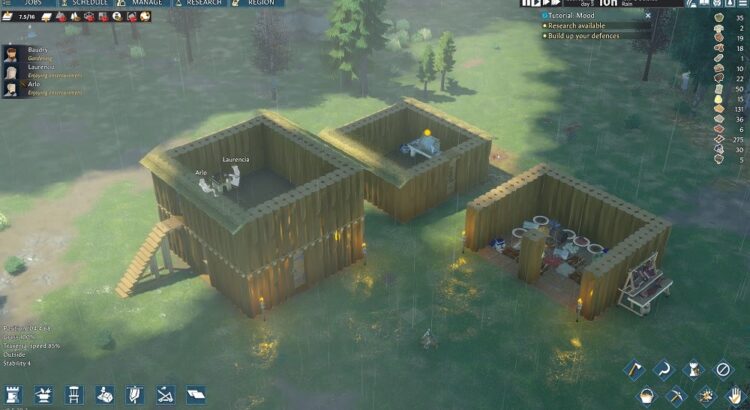 Building something up from scratch seems to be on a lot of gamers’ minds at the moment, as the colony sim is experiencing a major boom. Games in this free-form, sandbox style have been around for some time and competition is fierce, but Serbian developers Foxy Voxel will be pleased with how their take is competing against its numerous recent rivals. Going Medieval made an immediate and impressive impact on the Steam charts.

This particular historical spin on the genre is unabashedly derivative of long-standing favourite Rimworld, but besides its setting it has two major distinguishing factors. First, Going Medieval employs a voxel-based graphics engine which gives it a distinctive look. Secondly, it takes advantage of this 3D approach in part by incorporating multi-storey buildings, which sounds like a relatively minor element but is in fact quite transformative. Plush houses, towers, and multi-level basements are all possible here, the better to store food, weapons, and slumbering workers between shifts of back-breaking labour.

The setup is simple enough – the Black Death has devastated England and a few peasants have fled the existing settlements to begin one of their own elsewhere. Inspired with visions of utopia and with a healthy appetite for hard work, they set out to build a new Eden under the player’s tutelage. Those familiar with colony sims get what they expect – the plucky villagers are seldom controlled directly, but mainly by a system of job priorities. They each have their own skills, which are enhanced through practice. Every element of a successful society must be built up and maintained – a steady food supply, sufficient housing, provision of building materials, and the production of weapons and armour to help fend off raiders, be they bandits or religious fanatics.

Foxy Voxel started work on Going Medieval back in 2018 and their care and attention is evident in how detailed the game’s simulation is. The skills, quirks and moods of the settlers are modelled to a very fine level, and while the game isn’t hugely attractive visually there is a weather system, and so buildings and fields are periodically spattered with rain. In short, colony sim fans will find all of the systems they expect, albeit at a limited level of refinement at this point.

This is early access, and there are significant issues. The first and most pressing is that many players will see much of what Going Medieval has to offer before they hit the 10-hour mark. It is hard to become truly attached to villagers, when there is relatively little that can happen to them right now to endear them to the player. Some elements of the game can be unnecessarily frustrating – construction, for example, can be awkward, especially when adding stories to existing structures. Building fences is unintuitive and fussy, as they require special corner pieces to be added manually. Also, the UI could use some work – icons for resources are tiny, hard to see properly, and can often look too alike to tell apart. Other issues are more expected for the genre, such as the combat which is very flat and uninvolving compared with more peaceful activities.

Foxy Voxel have a clear and extensive road map detailing where they intend to take Going Medieval and it is clear that the critical systems are very much in place. Established fans of colony sims looking to take their enthusiasm in a more medieval direction have much to look forward to, but may want to delay their purchase until this entry in the genre has more meat on the bones. The game, certainly at this stage, is harder to recommend to newcomers to the genre. Due to the relative incompleteness of Going Medieval, and its fairly perfunctory tutorial system, it is a less than ideal introduction to the colony sim experience.

There is no resplendent Avalon to be found just yet in Going Medieval, as there is much work to do. However, the seeds have been planted, the stone is stockpiled, and some new workers just escaped from a local cult – things are definitely moving in the right direction.