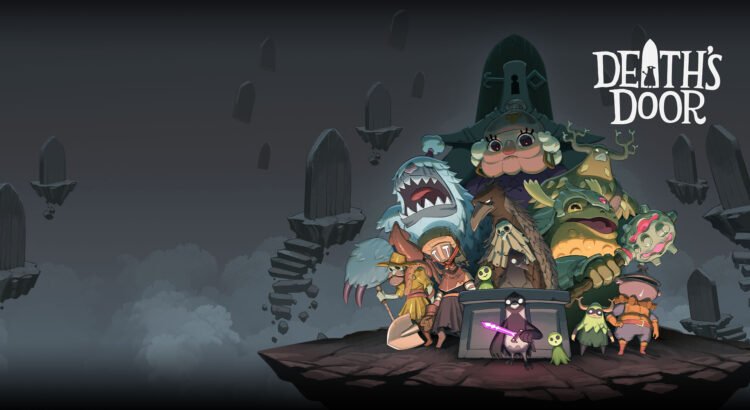 Developer Acid Nerve and the good folks at Devolver Digital have got quite a ride for those seeking to challenge immortality and deliver death to those who dare question the one guarantee life has in store for everyone in Death’s Door.

Death’s Door is an isometric action that stars a plucky little crow who just happens to be a grim reaper. Unfortunately for them, their life’s turned upside down during an assignment to collect one particular soul for the agency. They find out that a retired crow is looking to acquire even greater souls from an eclectic group of legendary beings so that the eponymous Death’s Door can be opened, and true death can be delivered to a land that’s forgotten that the journey of life has got to have an ending.

Just about every aspect of the game feels great. Controlling our crow friend is tight enough and still manages to carry plenty of weight during movement and while attacking. Thanks to that, the combat is smooth and can quickly become very chaotic, but still manageable, requiring you to be quick on your talons in order to survive.

Exploration is also done quite well, encouraging you to check every corner of Death’s Door vast maps where you can sometimes find seeds which you can plant and grow health pickups. If you’re good about exploring, you’ll also run into collectibles that help expand the game’s backstory, much in the way the Souls series is very keen on doing.

You start out with a reaper’s scythe, but other weapons eventually make their way to your arsenal, like a pair of knives that can make quick work of your enemies, or an umbrella, which, well, will make you look stylish even when flailing it around doing little to no damage to anyone. Speaking of damage, you’re able to up your core stats by spending souls dropped by kills, allowing you to continuously grow stronger, faster, the works.

Acid Nerve has certainly nailed a very unique sense of ambience with Death’s Door: just about every section of the game is distinct both visually and in terms of things to do. The first real world you visit, for instance, is a gigantic estate with lush gardens that eventually give way to a mansion filled with pottery that’s given life by a witch that refuses to let anyone close to her die.

While there’s nothing about Death’s Door that screams something truly original, the game’s pulled off so well that you probably won’t mind rethreading familiar ground in case you’ve played similarly playing games, like say, 11bit studios’ Children of Morta before. Death’s Door is a gorgeously crafted adventure that’s well worth taking, if not for our crow buddy alone, but also to end the curse gripping the game’s sour world.