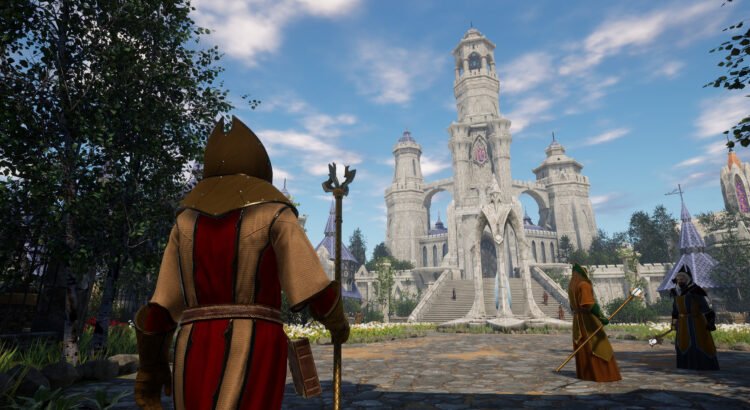 King’s Bounty II is a distinctly odd game. It’s the sequel to the original King’s Bounty, released back in 1990 on MS-DOS, Amiga and Commodore 64. Since then there have been several spiritual successors, including King’s Bounty: The Legend in 2008. King’s Bounty II bills itself, however, as a true sequel, rather than a spin-off. Set within the Kingdom of Nostria, you are plunged into a large and colourful world of dwarfs and dragons, mountains and rolling countryside. King’s Bounty II is a merger of open-world RPG combined with turn-based strategic battles. Although both of these gameplay elements are serviceable, there’s not really that much here which elevates the game to greater glory.

At the start, you choose one of three characters to play as: Aivar the Warrior, Katharine the Mage, or Elisa the Paladin (I chose Elisa) and this will impact your starting skills/perks as well as your voice actor for cutscenes. You’re released from prison (so far, so Elder Scrolls) and told that the Prince has freed you, on condition that you save the world from the Blight, a corruption which is sweeping across the land, allowing the Hallowed monsters free reign to wreak havoc. Apparently a wizard has foretold that you are the only person who can cleanse the land and prevent the end of the world. Along your main quest there are plenty of optional side objectives to discover, which help to make the world of Nostria feel lively and lived in.

There is plenty of voice acting with all NPCs fully voiced, and for the most part it’s appropriately enjoyable (although some background voices can feel rather phoned in). Indeed, talking to characters was probably my favourite part of the game, as it’s the best way to learn more about the series’ lore. There aren’t that many memorable people along your journey which is a shame, but this is still a lengthy game with plenty to see and do. Many quests involve you making ethical choices, and very similar to Mass Effect this will change your character’s alignment towards one of the four skill branches: Order, which represents the guiding hand of the law, Power, which represents your military prestige, Anarchy, for rebellious or defiant acts, and Finesse, which is for your magical and learning abilities. The higher your alignment to one branch, the more skills you can unlock when your character levels up, so min-maxing is generally preferable.

What stands King’s Bounty II apart from other open-world RPGs is its turn-based combat. All battles take place on a hexagonal grid, from which you have a squad of up to five units to control, which combine to form your army. Your larger army can be infinite in size, but five units will always form your active party. Your army invisibly moves with you when you’re in third-person RPG mode, only appearing for battles. Your character essentially becomes your army’s commander, and doesn’t fight directly. During battles, you move your units across the board with a certain number of action points, and attack using action points. It thematically has some similarity to games such as XCOM: Enemy Unknown, but is more in keeping with the Heroes of Might and Magic series.

The turn-based combat does take some getting used to, but often devolves into a matter of who has the largest and best equipped army in the first place. You don’t normally need to worry too much about unit placement (although sometimes you may find yourself boxed in), but if you lose heavily in a fight it will leave your army significantly under resourced for any following engagements, unless you have other units you can swap in to replace them. All your units belong to one of the four previously mentioned alignments; Order, Anarchy, Finesse or Power. It’s preferable to try and choose units of a similar alignment as they can have buffs which benefit each other, although if you choose different perks on your main character you can get benefits from all the alignments combined.

Visually the game does look great, with the various biomes of Nostria feeling very different from each other, including the snowy wastes and cold towns at the start through to the more verdant and lush scenery in the middle act. It feels about on par for The Witcher 2: Assassins of Kings in terms of fidelity, and each area of the world does feel appropriately big. You can’t completely explore it at your leisure, with invisible walls sometimes blocking you from travelling off predefined paths, but there is still plenty of exploration nonetheless. Getting around the world is a choice of either casually jogging to your destination (fairly slow) or riding your upgradable horse (slightly faster). Exploration is normally rewarded by a variety of hidden treasure chests which will grant some treasure which can be sold or re-used.

King’s Bounty II feels like a hodgepodge of two different games; the open-world and questing of The Witcher or The Elder Scrolls, merged with the turn-based combat of Heroes of Might and Magic. It sounds like a winning formula and while King’s Bounty II is proficient in its execution of various elements, there isn’t much that holding these parts together, and the story generally feels quite one-note. It’s far from a bad game, and indeed it has many elements which could make it great. But it feels slightly underbaked, and its fairly generic fantasy setting does little to make it stand out from competitors. If you enjoy turn-based combat and are looking for a fantasy game to whittle away the hours, King’s Bounty II delivers. However, the lacklustre story and somewhat clunky gameplay prevent it from becoming a game with mass-market appeal.