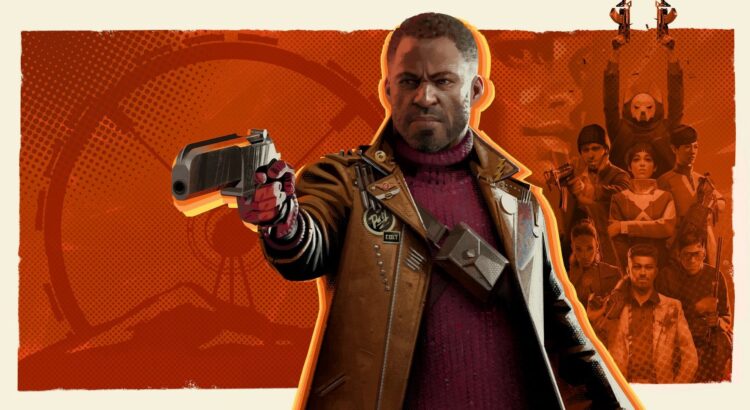 Arkane have become well known for their innovative games in recent years, from the brilliant Dishonored series to their reimagined, System Shock-esque Prey. The Dishonored series in particular I absolutely adore, and I still hold out hope that we’ll eventually see a Dishonored 3. Arkane’s newest game, Deathloop, is a substantially different game from those which preceded it. It shows clear lineage from what came before it, but makes significantly different choices. Full of satisfying stealth and combat, huge sprawling levels and an interesting multilayered story, Deathloop is truly one of a kind.

You play as Colt, who begins the game being stabbed to death by Juliana for reasons unknown. You awake on a beach, and quickly ascertain you’re stuck on the island of Blackreef, caught in an endless day-long time loop. For some reason, Colt has decided to try and end the time loop, while everyone else on the island, known as the Eternalists, are determined to stop him by any means necessary. At the end of every day, everything is reset, but uniquely Colt and his primary rival Juliana have the ability to maintain their memories between loops. Blackreef is a wild, remote, wind-and-snow swept island with many locales, combining the Dunwall-esque town of Updaam with the industrial spectacle of The Complex, where a vast ring-shaped machine seemingly keeps the time-loop in check. The story is very gradually fleshed out and it takes several hours for the game to properly open-up, but Colt is a very likable protagonist with a good sense of humour, and you can understand his frustration for being caught in this endless nightmare where everyone wants to kill you. There is a general end-game goal which can be attempted very early, but properly upgrading and collecting gear and equipment over multiple loops will make the final challenge much more straightforward.

Deathloop demands that you play it extremely differently than other Arkane games. Most notably, the game has no manual save function; whenever you enter a mission, you have no quicksave and no method of saving progress until you leave the map. The reason for this is tied to the game itself; because you’re caught in a time loop, your death is literally a game mechanic, and is never the end of your game. This means the game forces you to play much more proactively than the usual quiet, methodical way I would normally stealth through levels in Dishonored, quick-saving liberally. This doesn’t mean you have to always go in loud, but it does mean you have to take risks. Similarly, there are no non-lethal options; Colt has zero qualms about killing the Eternalists, possibly because after all they’ll just resurrect the next morning with no memory of what happened. The game might wear the clothes of an immersive sim, but I don’t really think it meets that criteria (indeed, the game cleverly alludes to this if you try to enter a familiar code into a keypad). Stealth vs. going all-guns-blazing are definitely choices you can make, but the lack of saving and non-lethal does set Deathloop apart from its predecessors. My one criticism of the save system would be if your computer or console were to crash mid-mission, or if you run out of time for some reason as quitting results in considerable lost progress.

There are four main districts on Blackreef, and while this may make it seem like there are only four levels in the game, each district changes substantially as the day advances through four time periods; morning, noon, afternoon and night. Areas of the map which might be empty of enemies in one time period may be crawling with them in the next, and vice versa. Likewise, the actual layout can change as doors get opened, new defences are built, or other events transpire. While completing a mission in a district you can take as much time as you like, but when you leave, time advances forward. At the end of the day, you lose everything except the knowledge you have gained by overhearing conversations, reading notes and computers, or completing other objectives. Later, you are able to gain the ability to maintain an arsenal of weapons and upgrades across loops, which substantially assists in your fight against the Eternalists. The aesthetic, of retro 1960s futurism set on a bleak Scottish island is surprisingly well realized, and reminded me somewhat of the Steampunk “tweedcore” of Big Robot’s Sir, You Are Being Hunted.

Your weapon arsenal is varied, from pistols to rifles and machine guns. All weapons have a quality level; basic weapons are dirty and prone to jamming, while blue weapons are cleaner, and purple weapons have additional abilities. There are also some extremely rare and unique gold weapons to be found.  You can hold up to three at a time, alongside your melee machete. As I still tended to prefer the stealth option, one of my favourites was the nailgun which allows for silenced headshots, although you have to get fairly close to enemies to make sure it’s lethal (plus checking whether the enemy is wearing a helmet). Likewise, weapons can be upgraded with trinkets, which are minor upgrades that can be found in the world or picked off slain enemies. At first all of these are lost every time the loop restarts, but once you gain the ability to transport items between loops, it’s possible to save them.

The magic powers of Dishonored make an appearance in the game as Slabs, which are worn by the “Gang of Eight” visionaries who control Blackreef. Kill one, and you can equip their ability. These include abilities such as Shift (a short-range teleport extremely similar to Dishonored Blink) or Nexus (which chains enemies together so they can be taken out as a group, exactly the same as Dishonored 2’s Domino). Gaining these abilities is a challenge but getting access to the abilities can open up significant new gameplay mechanics, not just in ways to take out enemies but also getting access to hitherto inaccessible areas of the maps (as many parts of the world are segmented off by high walls or sheer cliffs).

Deathloop’s multiplayer mode is an interesting asymmetrical invasion system, very similar to that which appeared in the original Watch Dogs. Players can take the role of Juliana and attempt to hunt down a player-controlled Colt, within their own game. You can swap between single-player mode and online mode whenever you like, which will control whether Juliana is controlled by the AI when she appears or if she’s controlled by a human. It’s an interesting cat-and-mouse mode because Juliana is equipped with a high-powered sniper rifle and so can pick off Cole from a long distance if he doesn’t move fast enough. Juliana also has a unique ability, Masquerade, which allows her to disguise herself as a random NPC, opening new possibilities to be able to ambush Colt. It is worth mentioning that this mode is entirely optional, and doesn’t impact the main game whatsoever if you don’t want it to.
Deathloop is genuinely refreshing in how different it is. It took me a while to get used to not saving, and being more daring in my battles against the Eternalists, most of which ended successfully and only occasionally ended with me being shot to pieces. The world is fascinating and the way you gradually learn new tidbits of information each loop means that even if you are killed prematurely, you still feel you have meaningfully progressed. Each zone has loads of secrets to uncover and will respond to Colt’s actions in different ways, meaning that mastering the maps and their layouts is crucial to fully upgrading Colt’s weaponry and hopefully bringing about a final end to the time loop. Deathloop is a brave change of direction for Arkane, and one which I think is overall extremely successful. It might not be an immersive sim, but it’s still a hell of a fine game.