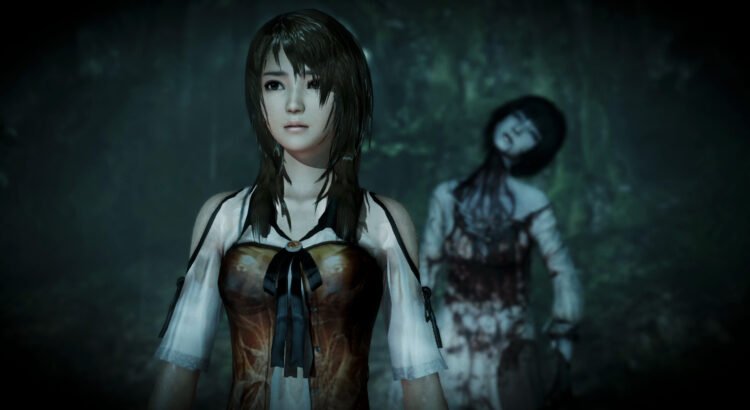 Hulloooooo! It’s the spooookiest time of the year, yes, November 11th, the day you shooooould goooo out alone! Soooo be carefuuuul! Halloween has nothing on November 11th! Boooo!

Ah, okay, I’ll drop the act. Yeah, I’m late on getting this out in time for Halloween because of my time off, so please enjoy my thoughts on Fatal Frame: Maiden of Black Water even though October’s past and we’re well on our way to the holidays!

Even though survival horror really took off during the first PlayStation era, it was during the second that it really saw a whole lot of variety when it came to getting our scares on. Some of the best sequels in the already established franchises were released on PlayStation 2, like Silent Hill 2 and Resident Evil 4. But it was also where new ideas started getting thrown into the horror mix, some of which were really out there, like the Fatal Frame/Project Zero series.

Even though I never engaged with any of the entries of that generation, I came to appreciate what Fatal Frame tried to do at the time. Without any real action to speak of in terms of defending yourself with firearms like in other series, Fatal Frame had the unique mechanic of using a camera to blow ghosts and apparitions out of existence, which seemed both silly and extremely neat to me at the time.

The fact that I had little to no experience with the franchise, coupled with how I barely played any WiiU games at all outside of the core Nintendo-produced titles meant that I had no idea there was even a Fatal Frame launched exclusively on that system until well after the fact. To me, it’s a no-brainer that the WiiU got a photography-focused game, after all its controller is perfectly suited for that kind of experience.

Now, I finally got the chance to see what all the fuss was about thanks to Koei Tecmo’s re-release of Fatal Frame: Maiden of Black Water on modern consoles, including the Switch, WiiU’s successor that kept and innovated on the pad that the WiiU was built upon. Sadly, I only got to test it on PlayStation 4, but all things considered, the DualShock 4 served its due as a substitute for a camera-like controller, at least as far as motion-sensing is concerned.

And surprisingly enough, I came out positively impressed with the idea and the way it’s executed in what’s supposed to be the fifth title in the series. Fatal Frame: Maiden of Black Water revolves around the mystery surrounding peoples’ disappearances in Mount Hikami, a fictional location in Japan. Three different protagonists whose lives are somehow tied to that mystery end up getting into the thick of it, and by the thick of it I mean ghosts, lots of them.

While the main thrust behind games like Resident Evil is pure gore and body horror, Fatal Frame’s thing is Japanese-style terror of the psychological kind. If you’re familiar with films like Ringu, you’ll know what to expect from Fatal Frame: Maiden of Black Water: jump scares, an increasing sense of tension and dread, young women getting into trouble, and… well… some jankiness for good measure.

Fatal Frame: Maiden of Black Water‘s gameplay loop remains the same throughout its campaign. You explore a number of scary locations only armed with the series’ trademark “weapon”, the Camera Obscura, and you’re graded at the end of each level depending on how well you perform in taking out enemies. This might sound like a boring time, but the “combat” is surprisingly engaging, having you wait for just the right time to take a picture and do as much damage as possible to whatever you happen to be facing.

The titular Fatal Frame happens when you’re able to time your shot just right and are able to rob your target of all of the power orbs that pop out of its body when you first zap them during an encounter. Overall, this fight mechanic works well and it feels very rewarding to get a high score after a particularly busy stage. Then comes the exploration part, which ends up being the least enjoyable aspect of Fatal Frame: Maiden of Black Water due to some limitations and less than stellar elements that were common in older games, especially survival horror ones.

The main problem is ironically enough, the camera. It’s just plain awful. Due to the fact that a lot of levels take place in the confines of buildings and such, it tends to lose track of you and be slow moving, contributing to a lot of what I’d imagine are even unintended or unplanned jump scares. Then comes the character movement, which is stiff and unresponsive, which coupled with how limited your actions are and how they’re tied to a single button, and having to keep it pressed is a pain when it’s something you do constantly throughout your time snooping around.

Then there’s the inherent Koei Tecmo perviness that’s usually present in games. Fatal Frame: Maiden of Black Water is certainly not as bad in this regard as say, Dead of Alive or even Ninja Gaiden, but it’s still very much there. Almost all of the female characters are designed in a way that exaggerates their bodily proportions, including some of the ghosts you face, which are subject to slightly all too bouncy breasts, and the protagonists are sometimes put in situations where their clothes get wet, accentuating their forms. If you’ve been put off by this in other Koei Tecmo releases, you should probably check out some gameplay videos before jumping into this one.

Technical issues aside, I had a good time playing Fatal Frame: Maiden of Black Water. It’s comforting to see the effort that Koei Tecmo put in to make this otherwise practically impossible to get game to a much wider audience, considering that used copies can go for hundreds of dollars online due to the limited nature of its original release. If you have yet to try one of these games, this new release makes Fatal Frame: Maiden of Black Water the most easily accessible of the bunch and worth giving a shot.