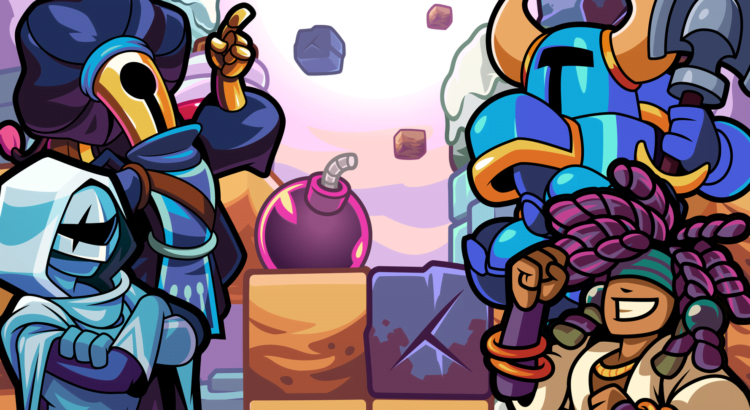 Every time I think that Shovel Knight has run its course, out comes a new game that breathes new life into the franchise. It seems Yacht Club Games wasn’t happy completing their Kickstarter goal and rounding out the Shovel Knight Treasure Trove with the addition of Shovel Knight Showdown and Shovel Knight: King of Cards. Now Shovel Knight Pocket Dungeon comes around to show our gardening utensil using hero a thing or two about block matching and rogulites to boot.

The premise to Shovel Knight Pocket Dungeon is straight to the point as it could be, but it’s in its simplicity where your ruin may lie as it’s one of the faster paced puzzle games you’re likely to play. Taking a cue from the very late in the NES life – the last game ever to be officially released, actually! – Wario’s Woods, Pocket Dungeon has you breaking out of single screen puzzle boxes as you collect loot, fight monsters, and unlock new power-ups for later runs.

Basically, the more you move the faster the grid fills up, and once it’s full, it’s game over. So you’re forced to keep going as even when you’re sitting still thinking about what to do next, the game will keep scrolling down regardless, although more slowly. This makes Shovel Knight Pocket Dungeon much more hectic than your usual match block puzzler, with the added benefit of making matches go by really quickly. Getting to the end of levels hinges on finding keys and opening chests that include new weapons and gadgets for you to use, and once a certain number of those are unlocked, an exit will eventually scroll down to the grid.

Fighting is a matter of bumping into enemies, but down go full hog on them as they get a guaranteed hit on you every time you charge into them. Luckily, you can build up your attack power and defenses which depending on whoever you’re going after, might mean you won’t be damaged, making minding powerups and knowing just the right time to use can get you out of tight pinches. And you’ll want to continually finish levels as losing – regardless of which mode you end up playing, roguelite or purely puzzle – will get you back to your home base.

Going back to your camp isn’t exactly a failure state, though. You’ll need to pop back from time to time in order to progress the item variety that can be dropped during puzzles by spending your hard-earned treasure, as well as shortcuts to later levels, not to mention other little knick knacks that should go unspoiled. Repeated runs will not only net you more cash to spend on all of these, but will also fatten up your ranks with new friends to play as too.

More of the knights can be unlocked after you beat them when they pop up every so often on the make and each of them brings a new flavor to the game with their own unique powers and styles. Specter Knight, for instance, can poison enemies but can’t take a lot of hits himself, much like his side-scrolling self, while Treasure Knight, on the other hand, is great at picking off enemies from below, basically turning the game on its head if you pick him. Switching out from Shovel Knight, who you start out playing is fun and helps bring a lot of variety to Shovel Knight Pocket Dungeon.

If you loved how all the past Shovel Knight games looked, you’re in for a treat with Shovel Knight Pocket Dungeon. It’s as colorful and chunky as the previous titles, although not nearly as 8-bit as the original, going for a much more detailed and lively look. The music is also fantastic, with tunes returning in new mixes and arrangements that will have you humming them well after you stop playing.

Outside of adventure mode, you can challenge a friend for a head-to-head puzzle battle and tackle the single-run daily mode, a now standard feature to just about every game there is in existence, tied to an online leaderboard that’s likely to provide legs to the game well after you’ve seen the ending screen.

Even though there are a handful of difficulty toggles at your disposal, I wouldn’t exactly call Shovel Knight Pocket Dungeon a very beginner friendly game. It’s relatively hard to get into at first due to the sheer speed and how fast you lose if you don’t know what you’re doing. There’s a clear learning curve to Shovel Knight Pocket Dungeon that might scare more casual players away, but it’s too bad and once you get over the initial hump, the game provides plenty of incentives to keep you coming back for more.

Shovel Knight Pocket Dungeon is a surprise entry to the series that got me yet again in love with Yacht Club Games’ incredibly charming world of Shovel Knight. It’s a tough cookie at first, but once you get acquainted with its quirks, you’re likely to want to keep it around for when you have a knack for a fun, fast-paced puzzle game to bump around in.