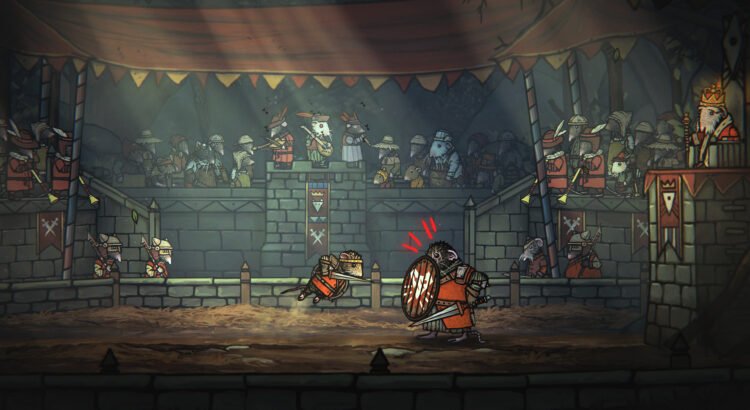 You ever play a game you were largely enjoying but eventually had to put down because you couldn’t put up with one small problem anymore? That’s me with Tails of Iron. From developer Odd Bug Studio, Tails of Iron is a side-scrolling action-RPG with some small Souls-like influences in its combat design that is largely successful at what it does — mostly.

When I say small Souls-like influences, I mean in terms of feel and some basic mechanical similarities. There’s no stamina meter, but equip burden (which does affect the speed of your dodge roll), attack animations with long wind-up and recovery, a measured approach to combat… that sort of thing.

In Tails of Iron, you’re encouraged to play a very defensive game. Rushing in and swinging wildly is a quick way to meet your demise. The game instead wants you to hang back and wait for an opening. Most of the time, this creates a very measured sort of combat: lots of moving back and forth waiting to see what the enemy does, preparing yourself to react accordingly. It often feels like a standoff due to how much time you and your foes alike spend waiting for the other to act. Coupled with how much damage one good hit does, it makes most fights — even the most general encounters — feel tense. Translating that sort of combat design onto a 2D plane isn’t easy, but Tails of Iron does a really strong job of doing so.

It’s the nature of the game’s dodge roll that’s the problem. Tails of Iron is a game that emphasizes defense partially because most of the attacks every enemy uses are unblockable. Your shield can absorb some hits perfectly and parry others (the parry is very good, by the way), but the majority of the time you need to roll out of the way. On paper, that’s easy enough. The indicators of such attacks are clear and easy to spot (red icons that appear over their head as they prepare to strike), giving you plenty of time to see them and dodge on reaction. In practice, it’s not so simple.

Traditionally action games always have some measure of invincibility on evasive moves to ensure you can use them to avoid damage, ideally so you can roll through attacks to not get hit and still maintain a good position or even retreat safely. Tails of Iron, far as I can tell, doesn’t subscribe to that notion. Every time I’ve tried to dodge an attack, unless I’m well out of the enemy’s range, I’m almost always getting hit no matter when I time the dodge. If I’m early, I end up getting hit during the recovery, which — fair; probably got the timing wrong. That’s on me. But if I try to time it properly or am just a touch late, I end up getting hit while dodging. I once got hit by a ground pound attack from a large enemy and, despite it looking like I was clear by all accounts, I was still hit because I guess the hitbox is deceptively large. It begs the question: when am I supposed to dodge? Am I supposed to dodge through attacks or away from them? I’ve put several hours in at this point and I still don’t have an answer.

I’ve only ever successfully avoided an attack when I was either already a ways off from the enemy and could easily roll to safety without their weapons ever coming close to me or the attack made the enemy leap into the air long enough for me to slip underneath them. I can’t tell if there simply isn’t any invulnerability on the dodge, if I’m just constantly mistiming it, or what. If the timing is just extremely precise, then okay — fine; bit annoying, but at least I know I’m just doing it wrong. Not knowing, however, doesn’t feel great.

It’s most frustrating during boss fights as the majority of their attacks must be avoided. There are few strikes you can actually block, thus emphasizing the importance of knowing how to dodge properly. I was able to get through most of them eventually (through a combination of learning the general spacing I needed to hang around to weave in and out… and a bit raw brute force), and a good number of them weren’t much of an issue in this particular regard, but I came close to giving up a lot. Hard to maintain interest when I’m struggling to understand how one of the game’s basic functions works. I kept going because I was enjoying my time with Tails of Iron on the whole and wanted to keep pushing forward if I could.

The point where I finally had enough was in an arena fight (that’s mandatory because you suddenly have to backtrack there to get a item to progress just as the story starts picking up momentum again only to bring it to a sudden halt; lot of bizarre pacing and padding like that throughout) where I was pitted against two bosses at the same time. Both are challenging on their own — one being a fast and agile foe, able to leap across the entire length of the arena, the other being a big and tanky, slow and generally easy to avoid figure who hits like a truck — and put together make a formidable duo. Fighting multiple targets is always difficult in Tails of Iron (hard to juggle multiple targets when you have limited space to move in), but when it’s just regular enemies who go down in a handful of hits, it’s manageable. Two proper bosses? Not so much.

Trying to manage two equally strong foes on a 2D plane is difficult, especially for a game as grounded as this. You aren’t performing any acrobatic feats to avoid attacks, instead relying only on the basic functions of blocking or dodging. Up till then, I was able to work around my frustrations with the dodge roll, but I could only roll out the way of one attack only to be lined up perfectly for the other half of the boss to be primed to knock me across the arena while I could do nothing but watch as I died for the umpteenth time so many times before I finally had enough.

When Tails of Iron works, it works. There’s a weight to combat that makes each hit feel powerful, the sounds of weapons clanging against each other and the smooth animations demonstrating the force put behind each strike. It’s fast and lethal, a few good hits all it takes to be within death’s grasp. It’s difficult, but thrilling when everything clicks. But there’s only so much I can push through the less enjoyable sections, only so much I can bang my head against the wall that is certain bosses before I lose interest.