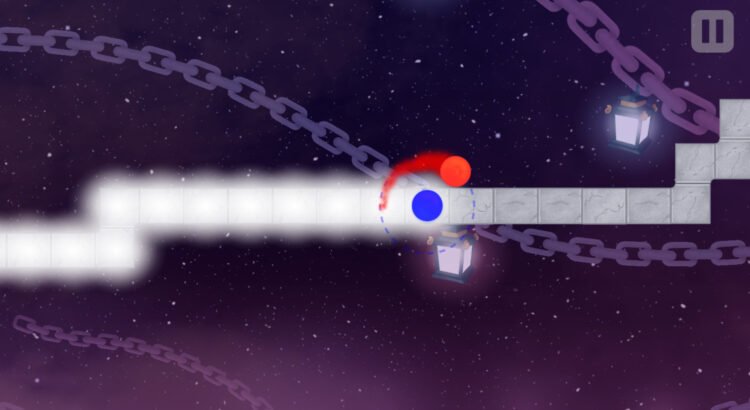 When it comes to rhythm games, I generally prefer the simpler, more straightforward variety. The more mechanically dense or the more buttons I have to remember to press, the less likely I am to stick with it. A Dance of Fire and Ice is mostly a game that tends to lean on the extreme end of simplicity, but still finds plenty of ways to keep things interesting.

A Dance of Fire and Ice is a one-button rhythm game where you guide two orbiting stars through winding pathways to the beat of the music. It’s about as simple as a rhythm game can get. Just tap whatever key or button you like in time to the music until you reach the end of the stage.

Every one of the game’s worlds is made up of two parts: a series of tiny levels and a final one that plays the full song associated with it. The quick preceding levels basically serve as an introduction to what you can expect from the main level of each world. The game begins with mostly straight lines with hard turns and then starts adding tighter zig-zag patterns and, even more devious, notes of differing shapes that loop around on themselves that have varied and often tighter timing than the regular square notes.

You instantly fail if you don’t hit a note on your first pass (unless you enable the recently added “no fail” mode), but as the songs are all short (a minute or two at most), it’s not that big of a deal. Getting back in is immediate and knowing the tricks to expect makes it easier to prepare for what’s coming instead of having to learn on the fly. It’s just a matter of internalizing what the intro levels taught you and then executing. Far easier said than done, of course, but it does help make the process of finishing songs a bit less daunting since you have some idea of what you can expect. For rhythm games that play with how notes are displayed like A Dance of Fire and Ice does, that little bit of extra help is appreciated as visualizing the timing can be just as useful as merely listening for it.

When I’m playing Unbeatable, for instance, I’m generally relying on the beat to time my button presses as my eyes are usually looking at what’s coming from the edge of the screen, to prepare for what’s coming so I can hit each one as they arrive. I can effectively just use the beat to guide my timing while I watch what’s ahead so I know what sort of button presses I need to do. With A Dance of Fire and Ice, however, I’m more focused on what’s in front of me because I’m actively moving through the notes and have to take the shape and pattern of the track into constant consideration. The stars’ rotation is always in the center of the screen, making it the literal focus of the game, but also emphasizing how important the visual element here is since relying on the beat alone, in my experience at least, has led to me being just slightly off on my timing.

I’m still stuck on the sixth world right now (there’s this one point where the camera rotates the map that’s throwing off my timing), but I’m slowly making progress. I’m looking forward to seeing what else the game might have up its sleeve for the other worlds eventually, doubly so since the game has a free expansion in the works that’s looking pretty wild.