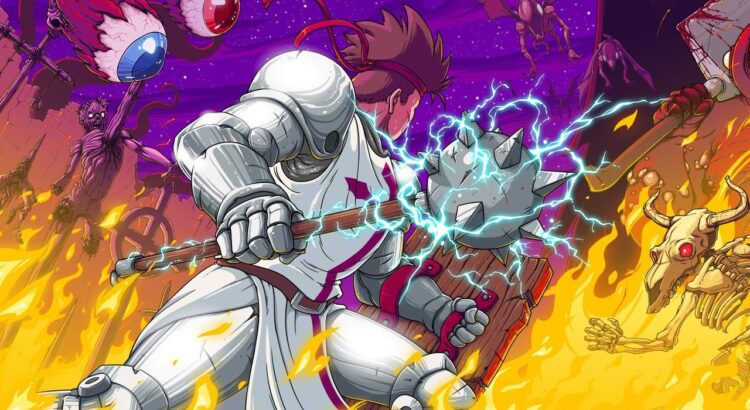 Yeah, yeah, we all know Castlevania is a hugely influential series that is still aped on to this day in a number of new releases, but what would you say if I told you there’s a game out there that masterfully borrows from it and still manages to be its own thing? It would be wrong to call Infernax one of those games under the genre that shall not be named. You know, the one with elements from Symphony of the Night and Metroid that has become a household label that’s applied to anything gaming related these days (or like my Entertainium buddy Callum would refer to as “search games”.)

Developed by Berzerker Studio, Infernax is an 8-bit, retro-inspired 2D action platformer that undoubtedly dips into Castlevania while managing to be its own thing thanks to the sheer amount of personality it oozes, or better put, bleeds. Playing as a crusader returning home only to find it overrun by the demonic forces of evil, you lead an incursion of your own in order to rid the land of darkness, one mace strike at a time.

Infernax is as simple as they come in regards to gameplay. You can jump and hit anything that’s in front of you. The more you kill, the more XP and gold you earn, both of which are used to enhance your character’s core attributes and equipment. You can also buy or find new magic spells out in the world, and they all come in handy when fighting against the unrelenting horde standing in your way.

But what might seem like a straightforward game quickly gives way to a more involved adventure since Infernax gives you choices to make throughout your quest, as well as many side missions to partake in. Depending on which way you go, you might end up having to bloody your mace even more, or fill your pockets with ill-gained gold, as well as somewhat influence the world around you.

Don’t be fooled into thinking your influence holds a huge deal of weight, though, as this game is nowhere near as complex as, say, Star Wars: Knights of the Old Republic, but it’s surprising to find an element such as this in what would otherwise be a very competent action platformer. Infernax is deliciously devious in presenting said choices out of nowhere, putting you on the spot as to how to act. I absolutely love that aspect of the game.

Also something that kept me hooked is Infernax’s sense of difficulty. This is by no means a cakewalk, and having to replay chunks of it in between deaths and savepoints helped cement just how bad I got at games since the 8-bit era. Whether you choose to play this on casual or normal modes, you’ll be in for quite a challenge. You can still go back and bump things down to casual if the more nostalgic mode is too much for you, but keep in mind it’s a one-way trip if you do.

While I wouldn’t call Infernax beautiful there’s no denying that it’s got a pretty good sense of style, with small touches that go a long way into showing that developer Berzerker Studio clearly cared about making this feel unique. I’m particularly impressed by how bloody the main character gets when he gets into the thick of it, and it’s also worth mentioning that although very slight, his looks change when equipping different armor. For what should be a very by-the-numbers emulation of what we can consider 8-bit, Infernax squeezes as much as it can from that limited palette for sure.

Like Devolver, Tribute Games, and a handful of other publishers that focus on indie games, The Arcade Crew should also be lauded for keeping it real with releases such as Infernax. It’s an excellent action platformer that leaves nothing to be desired with a challenging campaign and lots to explore and experiment with. It’s truly a bloody good time for sure.