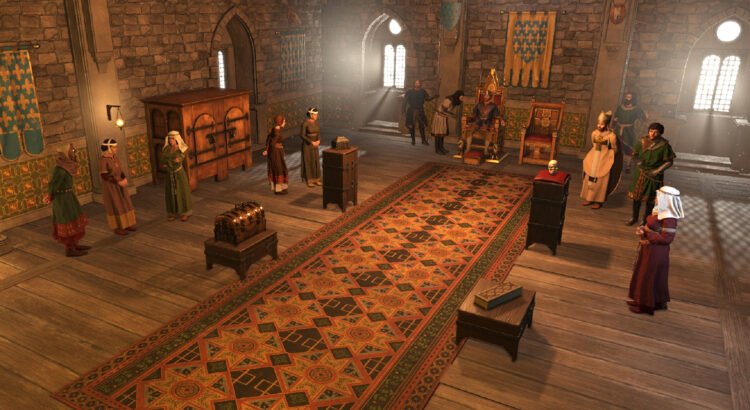 Since Crusader Kings III launched back in 2020, it has only seen a small assortment of DLC including some cosmetic additions, and the minor Northern Lords add-on, which gave some extra flair and customizations to Nordic characters. Royal Court is the game’s first relatively substantial expansion, and with it comes a fairly hefty price tag ($29.99/£23.79). While the new additions to the game are all enjoyable, such as the virtual court itself and the ability to create new cultures for your empire, in the end they don’t particularly affect the core gameplay loop except to provide interesting side activities to fill previously dead time waiting for other events to unfold. In this way, I’m reminded very much of an expansion pack for The Sims (and likewise, the fairly high price of this expansion similarly mirrors that of Sims expansions).

The main draw of Royal Court is the titular new court function. This is a virtual hall you can visit when playing as characters who are kings or greater, meaning characters who are merely dukes or tribal warlords won’t get to see it (unless they are able to become a king later in their lifetimes). The hall is a virtual representation of most of your significant courtiers, knights and councillors, as well as your own character (and their spouse) seated on their thrones. Within the hall, you can do several activities such as decorating it with new artefacts and trinkets which you may acquire during the game (a system which previously existed in Crusader Kings II and which has been brought back with this DLC), improving the quality of the entertainment, food or clothing of your courtiers, as well as actually holding court and listening to the concerns of your citizens, or resolving disputes.

Decking out the hall in the greatest finery and the most dazzling food will help to improve your court grandeur level, a new scale which functions similarly to prestige. Increased grandeur can not only unlock new bonuses but also improve other character’s opinions of you, allowing you to attract more talented people to serve as a courtier. Hearing from the citizens is a fun side activity as it will present a few story-based decisions which can result in both positive and negative side effects, such as one of your vassals arguing that he should be compensated for a neighbouring army pillaging his land, or a merchant who offers you his wares. It’s great to see all these various characters, who you previously only saw through portraits or event pop-ups in a fully rendered environment within Royal Court, and it helps to make them feel a lot more vibrant and alive.

The other major addition is the culture system, which functions in a very similar manner to the existing religion system in the base game. While culture previously existed, it wasn’t possible to alter it significantly. Now similar to your religion, you now have the option of amending and changing your culture, as well as creating your own, branching off from an old culture. You can make some quite wild changes to your society, such as changing your language, the general ethos of your civilization, to even minor things such as what gender knights can be. These elements really help with role-playing and forging an empire which feels like it is unique to your character and their bloodline. Likewise, characters can now learn new languages, and this can allow you to forget better relations with allies if you both speak a common tongue.

Royal Court takes what was already a superb grand strategy game filled to the brim with the possibility of fantastic personal stories waiting to be told, and gives even more opportunities for those stories to be uncovered. Quite sensibly it doesn’t change the basic structure of how you play, but instead provides additional activities to partake in when you want a break from either conquering your next kingdom or plotting to murder your next Pope. While I do think the standard price tag is too steep given the relatively limited amount of new content which is added by the expansion, everything which is included is fun and worthwhile, and hence I can unquestionably recommend picking this up when it gets discounted.

Read our review of the original release of Crusader Kings III.