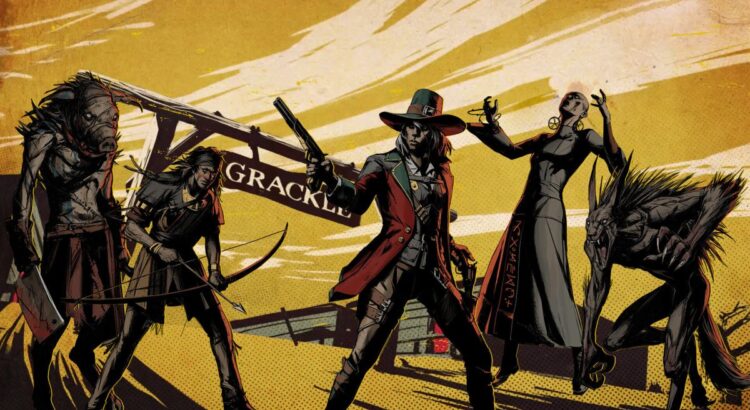 Weird West is a game built in interesting and challenging circumstances. It is the product of WolfEye Studios, a new and small developer founded by a designer with long experience and big ideas. Raphaël Colantonio co-founded Arkane back in 1999, and prior to his departure he led the development of major and successful games like Dishonored and Prey. With Weird West, WolfEye Studios have attempted to fuse some elements of these “immersive sim” games with an action RPG set in an Old West suffused with supernatural elements.

For a team of 25 people, this was a formidable task – to say the least. The list of features in Weird West’s world, and the number of things that the player can do there, reads like something that only a very large, wealthy studio would attempt. While the main story doesn’t take many tens of hours to complete, this is still a big game. Players experience the tale not as one character, but as five, played in sequence. There is a wide range of optional activities like pursuing bounties, mining, hunting, and crafting as well as numerous side quests. Adding still further complexity is the ability to recruit a posse of AI mercenaries, a day/night cycle, and a richly responsive world. Depopulated towns can be taken over by the undead, a friend for life can become a mortal foe, and a stray gunshot can ignite raging fires.

When Weird West is at its best, these many systems mesh in a way that offers players numerous ways to approach a problem and produces some truly memorable moments. At times, though, the various mechanics on offer can feel half-baked or can clash in frustrating ways. There are also some bugs and unfortunate quirks which will disrupt the experience for some players. All these considerations must be factored in when deciding whether to take a ride into the Weird West.

Before confronting these larger questions, it is worth pinning down what Weird West actually is. While this is an action RPG, it is an unusual one – and not only because of the five playable characters. Notably, the game strongly de-emphasises numbers and statistics. There are no formal character levels, nor an experience system, and weapon damage is about the only stat which gunslingers need concern themselves with. In this and other respects, WolfEye have clearly aimed to build a flexible and accessible role-playing system. This is vital, due to the relatively short time players will spend with each character. Even while taking on side-quests, it will take only a few hours to tackle each “journey”, as these phases of the game are called.

Also very flexible is the player’s path through the world. The locations in this Old West are scattered across a map which is traversed just like in the original Fallout, complete with random encounters. Where the post-apocalyptic classic had radscorpions and supermutants, Weird West has bandits, packs of wolves, and the lightning-tossing “witches” of the Oneirist faction. While the main journey quests will tug the player to specific locales, there is otherwise a large degree of freedom. Even if the player enters an area filled with powerful foes, they may still be able to plunder it through determined use of the somewhat rudimentary stealth mechanics.

If subtlety fails, combat is always an option. Battles play out in real-time, and when played with a controller resemble a twin-stick shooter. All characters can use a slow-motion shoot-dodge right out of the Max Payne playbook. The elemental effects like fire, rain, pools of water and oil can all be taken advantage of. Burning enemies will be extinguished by rainfall, for example, but when they are wet they are vulnerable to lightning-based attacks. While a small number of melee weapons are available, the awkward controls for close-up fighting mean that pistols and rifles feel far more viable. In Weird West, it may be dishonourable to shoot a rival in the back from far away, but it’s a great deal safer.

Players can recruit AI mercenaries, or even their own past selves, as posse members. As with a number of elements of Weird West, this is far better in theory than in practice. Ally AI is very poor, and these gunslingers for hire are not able to follow the player if they climb a wall or jump a small gap. While allies can’t climb onto a roof, they will occasionally teleport up there by accident, and will be unable to climb down. Frankly, the West is much better explored alone. Sadly, horses are also a disappointment. They are almost always static, and serve as mere four-legged fast-travel points standing at the edge of a location. After a while, those locations also become uninspiring – all mines are largely alike, for example, and the same is true for haciendas, caves, towns, farms, and occult temples.

These shortcomings are all likely reflections of the small WolfEye team struggling to deliver on their ambitious design. The unfortunate lack of almost any voiced dialogue is another sign of the modest resources with which Weird West was made. At times, though, the game genuinely comes together. With the right weapons, gunfights can be exhilarating spectacles which spiral out of control. It is very satisfying to solve a problem in a creative way, like stacking crates to jump into a first-floor window or to defeat a land baron through subterfuge instead of force. Fans of early Fallout games may revel in the way parts of its formula have been updated in this way.

However, these moments seldom arrive often enough. Weird West aims to do so much that too many systems feel too underdeveloped to satisfy. There are only a handful of functionally different weapons, for example, and some of the perks which carry over between characters feel much too slight to bother with. The skill system never really clicks and has some strange omissions – the werewolf character lacks any skills which have anything to do with being a werewolf and it undermines the uniqueness of his journey. The body-hopping narrative idea has so much potential but little of it is really explored, and it is disappointing to see past characters reduced to blithering idiots when they are recruited as AI allies. An easily obstructed camera and some bugs – like weapons that sometimes unequip themselves during an area transition – also become frustrating.

After they left Arkane to found WolfEye Studios, Raphaël Colantonio and Julien Roby spoke frankly and convincingly about the drawbacks of large developers with hundreds of employees. Ironically, though, Weird West is a game which could have been so much better had it been made by a much larger team with the resources to make good on its ambitious design. What has been achieved here is laudable, good and occasionally great, but WolfEye may have been better advised to take on a project of a more manageable scale. There is real imagination and talent on show here, but Weird West is not the best way to harness it.