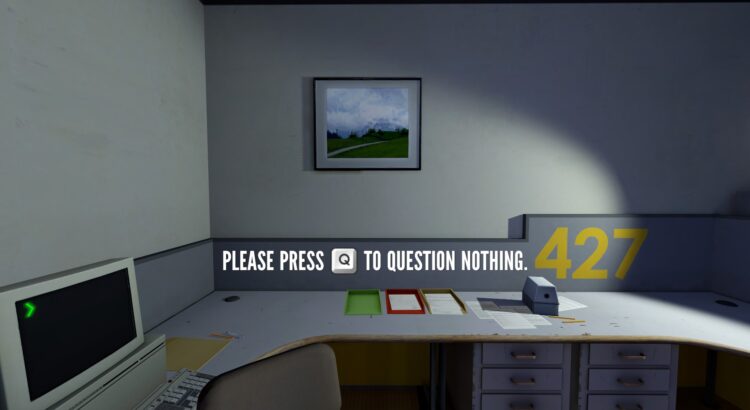 Let’s begin again. This is a story of a video game called The Stanley Parable. First released as a free Source engine mod in 2011, then as a full game in 2013, nine years later the original creator and writer Davey Wreden has again teamed up with designer William Pugh and his studio Crows Crows Crows to release The Stanley Parable: Ultra Deluxe: An expanded and semi-remastered version of the original game. While containing all of the wit, humour and pathos of the original game, this new version contains literally buckets of additional content to unearth, close to doubling the length of the entire experience.

If you’ve already played The Stanley Parable, you’ll know what to expect going in. For those uninitiated, The Stanley Parable is a comedy game which takes an in-depth look at the subject of player choice in video games, via gentle mockery and critique. You play as Stanley, a boring office worker who is blithely happy following instructions on his computer ad infinitum, when he one day discovers that all of his coworkers have vanished and that no new orders are arriving. From here he must venture out into the office, where he is soon faced with a set of two open doors. The Narrator, the mostly omniscient, omnipresent voice which follows Stanley wherever he goes says that Stanley walks through the left door. But what if you decide to take the right door instead? From here the game branches and branches again into radically different stories and endings, each with different Narrator dialogue, locations to visit and jokes to enjoy. The 2013 game had about 15 endings, while the Ultra Deluxe effectively and elegantly more than doubles this number (or more specifically, provides new variants of most of the games original endings, as well as some brand new ones).

Gameplay is very typical for a “walk-’em-up” or walking simulator, in that as the name implies you are predominantly walking around environments, listening to Narrator dialogue and looking at different things in the environment. The joy of The Stanley Parable has always predominantly come from its absurdist and self-referential humour, and Ultra Deluxe doubles down on this repeatedly, deliberately calling out the “new content” added to the game and routinely breaking the fourth wall. Some of the newly added material looks at the idea of video game sequels and their critical reception, in a wry but sometimes surprisingly emotional way. Thanks to the absolutely stellar performance of Kevan Brighting who has recorded plenty of new dialogue, Ultra Deluxe absolutely elevates the Narrator into the pantheon of extremely memorable video game characters alongside the likes of Portal’s GLaDOS or System Shock’s SHODAN. The Narrator’s own inner conflict is even more on display, where he wrestles with both nostalgia and wanting to improve on what was in the 2013 game.

The one area where I felt a little disappointed were the visuals. While the Ultra Deluxe includes newer and nicer lighting techniques and higher resolution textures in some areas, fundamentally it is graphically identical to the 2013 version of the game, despite the fact it was rebuilt entirely in Unity rather than Source. Some of the shadows can be especially jagged and there doesn’t seem to be an option to smooth them out at this point. While I appreciate that most of the work went into crafting the new environments and thinking of ways to merge extra content into the existing game, as well as recording loads of new dialogue, the delightfully bland office environments could have done with a bit of a graphical overhaul and refresh. The new music is all great however, including a secret song or two if you know where to look.

The Stanley Parable: Ultra Deluxe has been deliberately designed so that whether you’ve never heard of the game before and are starting fresh, or you’re a seasoned veteran who experienced all the endings of the 2013 game, there is still plenty here for you to enjoy. The humour may not be for everyone’s taste, but the writing remains as sharp as ever. All of the new content adds about 3 hours to the game’s runtime if you go hunting for every last ending, plus a couple of minor amendments to the original game content are fun to spot. All in all it does flesh out the original in a meaningful way, making this an unqualified recommendation to those who have never experienced it. There has never been a better time to experience The Stanley Parable, where the end is never truly the end.