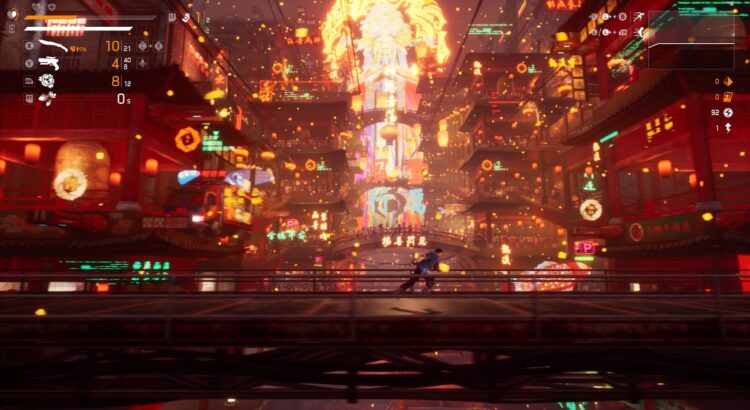 Recent years have seen an increasing range of mainland Chinese pop culture products making their way across to the West, from the sci-fi novels of Liu Cixin to the gung-ho military action movies directed by Dante Lam. Of course videogames have also been a part of this wave, and later this year that will include Loopmancer.

Developed by Beijing-based eBrain Games, this is a Chinese take on three elements that have become common lately – the cyberpunk aesthetic, roguelike elements, and gameplay structured around a time-loop. What makes Loopmancer stand out from the crowd is that it is actually a side-scrolling game. It may run on Unreal, and have some impressive 3D visuals, but it plays out entirely on a 2D plane – which may bring to mind the remake of Bionic Commando.

Players take on the role of Xiang Zixu, a cyborg cop in the futuristic metropolis of Dragon City which was built up in the aftermath of a major global conflict. Mourning the loss of his daughter and one of his arms to a car accident, Xiang returns to work with a hunger to smash the city’s criminal enterprises. After some brief interactions at his apartment and police station, the preview build has Xiang take to the streets in search of a missing journalist.

Inevitably, the side-on battles with local cybernetically-enhanced thugs prove tougher than Xiang expected – but each time he dies, he wakes up at home again. In the preview build, Xiang finds no clues as to why this might be. The roguelike element comes in via a variety of terminals located around the environment, in which Xiang can invest currency to unlock new weapons and skills. These, unlike certain one-off bonuses, are then accessible on subsequent runs.

Loopmancer is apparently still some way off release but does show some promise. eBrain have made good use of Unreal to render Dragon City. So far, it has yet to display much which marks it out as unique when compared to the many other cyberpunk cities we’ve seen, but it still looks impressive. The English voice acting is merely passable, and thankfully the team has provided the ability to instead hear the original Mandarin dialogue with English subtitles. There is clearly a wide range of weapons and abilities to unlock, and the combat is fluid and suitably bloody.

There are some definite rough edges. While the game is fast-paced and pleasant to look at, some animations are a bit crude at this early stage. It is also often quite difficult to tell when Xiang is taking hits, and how to avoid sustaining damage. Occasionally, the characters on screen will be obscured by level geometry like concrete pillars. These factors can contribute to frustrating deaths, and even in this brief preview build it already becomes tiresome to revisit the same locations many times in new loops.

While it’s likely that eBrain can iron out these issues, the most divisive element of Loopmancer is likely to be its choice of perspective. To lovingly render a futuristic city in a 3D engine, and then to allow players only to explore it in a restrictive 2D manner, is a risky choice by the developer. There are many excellent fully 2D side-scrollers out there, and many fully 3D third-person action games which offer greater freedom of movement. At the moment, Loopmancer feels awkwardly caught between these two stools but eBrain may yet have time to overcome this challenge. To paraphrase another cyborg adventure, they have the technology.