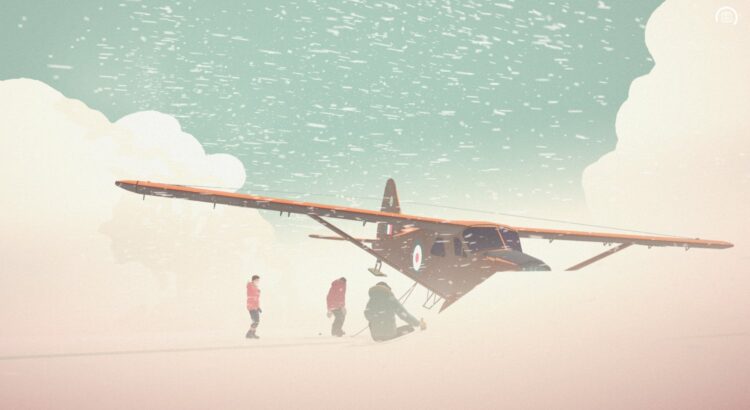 Narrative adventure games are a genre where the balance between story and gameplay is often a fine line to tread. Back when the term “walking simulator” was being thrown around as a pejorative, people tried to argue that games such as Dear Esther were not really “proper games”, but something lesser. While that argument has been pretty much consistently and thoroughly refuted in the years since, there are games today which still skirt the boundary of interactivity to just as much of a degree as Dear Esther did. South of the Circle is a linear narrative adventure from developers State of Play, who previously made puzzle games such as Kami and puzzle adventures like Lumino City. South of the Circle is their first purely narrative game, telling the story of a British university lecturer lost in Antarctica.

The story follows Dr. Peter Hamilton, a Cambridge University lecturer and meteorologist in the late 1950s and early 1960s. There are two main timelines which consistently intertwine with each other. In the story’s “present”, Peter is stranded in Antarctica following a plane crash and must try to find rescue for himself and his Australian pilot. This life-and-death drama is intercut with many flashback’s to Peter’s earlier life and career at university, including meeting fellow lecturer, later colleague and love interest, Clara. Peter’s area of study is focussed on clouds and their formation, but he’s struggling to write a paper on the subject. That is until Clara helps him find inspiration and they embark on a research project to Scotland together. Peter (Gwilym Lee) is quite geeky and awkward while Clara (Olivia Vinall) is more outgoing and zestful.

South of the Circle is most reminiscent of the game Virginia, in both its artistic style and filmic execution. However, while Virginia’s story was delivered completely without dialogue, South of the Circle has plenty of it. The voice acting from all characters is strong and memorable, particularly from Anton Lesser, best known for playing Qyburn in Game of Thrones, who plays Peter’s superior at Cambridge, Professor Hargreaves. The interweaving of Peter’s childhood and university life with his desperate trek across the Antarctic wilderness is skilfully done, but I personally failed to find much emotional resonance in the story, despite the best efforts of the cast. The plot touches on numerous themes such as feminism, the old boys network at Cambridge, Cold War paranoia and nuclear weapons testing, but doesn’t delve too deeply into most of them. It also ends on a slightly unresolved and open note, one which didn’t give any of the kind emotional closure I was hoping for. Nonetheless, others may find much to untangle and wade into here.

South of the Circle is strictly linear, and more restrictive than most “walk-’em-ups” in many regards. Most scenes cut between Antarctica and Peter’s flashbacks completely seamlessly, sometimes instantaneously mid-scene, sometimes merging flashback with his ongoing trek through the snow. Your main involvement in the story is choosing what emotion Peter will respond to a situation with, be it scared and anxious, confident and determined, or questioning and cautious. A lot of situations only give you a single emotion to respond with, which will happen automatically whether you click the mouse in time or not. Similarly if you don’t choose an emotion, the game will choose one for you. Hence very large parts of the game essentially play themselves, and only the segments where you’re controlling Peter as he walks around or as he drives a vehicle require your direct involvement. The upshot of only choosing the emotion with which to respond is that you never really know exactly what Peter is going to say, meaning Peter can react in ways which you might not anticipate, or might not have intended.

Artistically and musically the game is strong with a lovely painterly aesthetic to most environments and characters, rendering them simplistically but with enough detail to convey meaning. The orchestral soundtrack is appropriately emotive but lacked any memorable themes for me. Although you naturally can replay the game and make different emotional choices, I’m not sure you’d get that much out of doing so since the story feels duty bound to hit numerous key points, and your decisions more impact how Peter feels about what’s happening, more than changing the route he takes.

Although South of the Circle failed to touch me emotionally at anything other than a surface level, it is nonetheless a nicely paced and structured linear narrative adventure, merging the frozen wastes of Antarctica with the golden afternoon sunshine of Cambridge. If you enjoyed Virginia, this game is an unquestionable recommendation given its stylistic overlap, but if you’re put off by linear narrative adventures of this type, South of the Circle probably isn’t going to win you around.