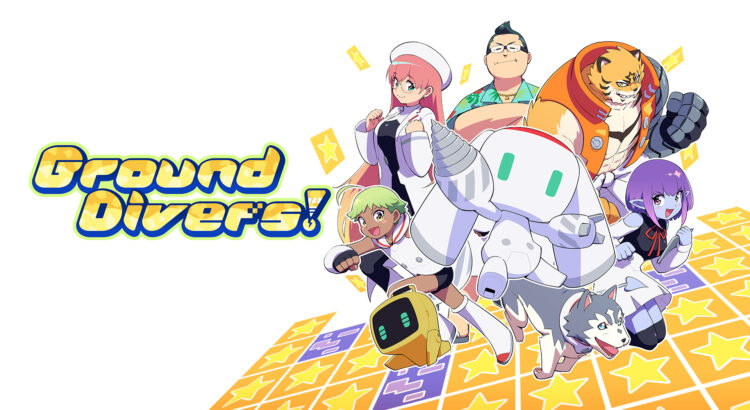 What’s your first instinct when you’re stuck in a game? Take a break and come back later? Brute force it until something works? Give up? Obviously looking up a guide is the actual answer, but in those cases where that isn’t an option, I’m usually one to try to brute force my way through before taking a break to think on it. Only, those methods haven’t worked so far in Ground Divers. I hit a roadblock and haven’t quite figured out how to bypass it. I’ve tried just about everything I can think of. Feel like I’m missing something.

Ground Divers is self-described “strategy roguelike.” You take on the role of a member of a mining group who takes on jobs to dig up specific, often rare minerals for their clients. You do this by guiding a small robot named Tsuruhashi by placing markers for them to follow. Each marker costs action points (AP), which are gained with each block you destroy. The goal is to make it through each level, going deeper and deeper, until you reach the layer your target is on before time runs out.

Ground Divers is a constant balancing act. Every level requires you to be fast and resourceful but also thorough and quick to use your tools to their fullest. You want to be moving quickly to make sure you reach the next layer before time expires, but also drilling as many blocks as possible to build a good store of AP. Managing AP while trying to find the most expedient route forward is where the game shines. It’s a sort of play that demands fast decision-making while also consideration of your current resources and how best to use them.

Do I stop to build a pit to spend AP to heal and level up before continuing forward or keep pressing on and hope there will be a pit already waiting for me in the next layer I can quickly stop at? Should I be using those attack boosts now to get rid of some enemies faster or save them for the walls of tougher rocks to break through later? While the levels are somewhat random, the broad strokes of what to expect from each layer are always consistent, which helps inform your decision-making. It’s a good example of how roguelikes have some measure predictability built in. For a game like Ground Divers especially, where strategy and preparation are key, it makes the core loop work because failures are still providing an idea of what to expect and be ready for on your next attempt.

Or that’s the idea, anyway. The problem I’ve run into is that I’m not sure what I should be doing better or different. Most of my time with Ground Divers has been spent making runs on the game’s fourth level, a volcano where the rocks I have to drill through get progressively stronger and tougher to destroy. Up until then, Ground Divers was pretty straightforward: be smart about AP usage and don’t engage in fights needlessly and more often than not I would be fine.

The game’s tip for the volcano is to avoid the tougher rocks and navigate around them. For the first three layers, that’s sound advice. The level design always ensures there is a way forward where you either run into as few as possible or bypass them entirely. By the time you reach the final two layers, however, that’s not an option anymore. You have to push through the kinds of rocks you’ve been conditioned to avoid because they’re everywhere now. Additionally, the final layer is longer than any other level so far, meaning you have to be extremely efficient to reach the goal before time expires.

I’ve gotten close a few times, but always end up running out of time. In theory, I know what to do: stock up on items to boost my attack power and use them constantly so I can break through those blocks faster and have plenty of AP ready to go so I can use my special frequently to further expedite that. Through repeated runs through that area, I’ve learned that’s the most effective way to deal with tougher rocks, so it should work. In practice, it hasn’t yet. Every time I’ve tried, the timer is something I can’t outpace. I can try making a beeline for the bottom of the stage, but I always end up in the final 60 seconds by the time I’m at or a little ways past the half-way mark, even if I’m using all my abilities and resources to their fullest. Which leaves me to question: am I missing something?

It’s not an uncommon feeling. With roguelikes especially, I often hit a point where progress stalls as I figure out what adjustments I need to make to keep up with the game’s difficulty curve. Slay the Spire was one where I basically brute forced my way through it for the most part until I couldn’t. My lack of knowledge and experience with deck builders made each run a complete gamble on whether I’d get through the second area or not. Engaging with card games on that level, of planning around card synergies and making careful decisions on what cards to cut from the deck to create predictable outcomes, was necessary to succeed. Or how in Dreamscaper I wasn’t making much progress at first because I wasn’t using my abilities to their fullest and instead relied on just mashing attacks and using dodge rolls for defense.

Problem is I don’t know where I’m going wrong. Failure is an intrinsic part of roguelikes, but it should be instructive. A failed run should provide an idea of what went wrong and why to provide actionable info to work on. Ground Divers, in my experience, hasn’t been forthcoming – at least not on the current level I’m stuck on. On previous levels, any mistakes were instructive – bring items I can exchange for extra AP to compensate for the lower gains from drilling in some areas, don’t engage certain enemies without an elemental advantage ready, etc. But here? Not so much.

It’s frustrating because the core loop works and seems like there could be something there. The strategy layer has enough going on to make the minute-to-minute play interesting once a run kicks off in earnest. But until I somehow find a way past this roadblock, I’m kinda stuck and, frankly, don’t have much motivation to find out.