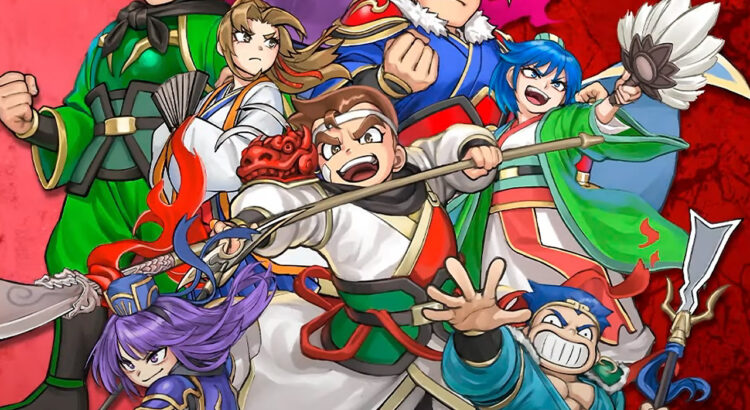 In my insane mind, I imagine the River City Ransom franchise, also known as Kunio Kun, to be a lot like Super Mario’s. High school punk Kunio and his friends have starred in just about every genre known to humanity, from a laundry list of sport titles down to turn-based RPGs. If Mario had his humble beginnings as a carpenter only to later become a ref, a chef, a starship pilot, and whatever the heck else he’s been in the 40+ odd years since his creation, Kunio is definitely not behind.

So it’s no surprise that he’d now be in a historical action game set in ancient China. River City Saga: Three Kingdoms, from beloved fighting game developer Arc System Works, puts the crew in the Han dynasty in China during the Yellow Turban Rebellion all the way down to the Battle of Red Cliff, particularly dramatic points in that period where some of the biggest historical battles took place.

Kunio is the star of the show as a lowly unemployed hoodlum moving from town looking for odd jobs as he just happens to stumble upon loads and loads of bandits to beat the ever living crap out of all the while making friends along the way. If you’ve ever played any of the classic River City Ransom games, you’ll feel right at home in terms of gameplay as River City Saga: Three Kingdoms is pretty much one of those, only in ancient times.

The main story mode will take you through a number of chapters as Kunio explores the game’s map in search of work as part of the story in River City Saga: Three Kingdoms. It’s a humorous journey where you’ll also get to take some side quests which will require you to do some grinding for items, for instance, yielding neat rewards and plenty of jokes through the sharply localized dialogue, as par for the River City series.

In case you haven’t played one of these games before, they’re great beat ‘em ups where not only do you get to punch and kick through hordes of enemies, you also get to level up your character in a persistent manner, and equip them with all manner of equipment. The fighting itself can get relatively technical due to the sheer amount of thugs mobbing you at every time, requiring some tactical thinking on your part and not just button-mashing.

As with every River City entry, River City Saga: Three Kingdoms also allows you to grab a friend and co-op your way through the game, adding a lot of extra chaos into levels in the same lovingly aggravating way as the usual brawler. Although probably not nearly as bad as in the Turtles’ game released last month, six players can be too much at times!

In case you’re looking for an even more old school experience, there’s bonus mode, where you’ll get to play a more arcadey, level-to-level version of the base game that lets you pick from a host of River City Ransom characters in their Three Kingdom incarnations to play as. They each feature their own unique strengths and weaknesses, such as having better weapon handling at the outset of not being as resilient health-wise, for instance.

For as traditional as River City Saga: Three Kingdoms is overall, it’s exciting to see that Arc System Works isn’t willing to take a previously established and extremely successful formula and make it into a new game like this as they’re always in demand.

Graphically, this historical adventure has much going for it. Although the character designs remain the tried and true looks of old, they’re extremely well animated and pack a ton of personality. Everything else is visually strikingly detailed and sharp, with colorful backdrops where all the in-game mayhem ensues, with impressive flourishes like depth of field and parallax scrolling, in true 2.5D HD fashion, much like Square Enix’s recent RPG releases Triangle Strategy and Live A Live.

There’s also a beautiful animated intro to the game to set you in the mood before diving in that’s well worth a watch when first getting into River City Saga: Three Kingdoms. The music in this is also really catchy and upbeat and doesn’t get grating at all even if you have to replay levels repeatedly in case you get game overs. Sadly, the game features no voice acting, unlike the more recent WayForward entries, which can be disappointing to players coming into this after playing those.

River City Saga: Three Kingdoms is in no way revolutionary, but honestly, it doesn’t have to be. For what it is, it’s an awesome game that sticks true to its guns, and to all regards, it’s incredibly entertaining. If you’re looking for the next big thing when it comes to brawlers, you’ll sure won’t find it here. However, if it’s fun you’re after, well, Kunio Kun and co have you covered, even more so if you have someone else to play this with.