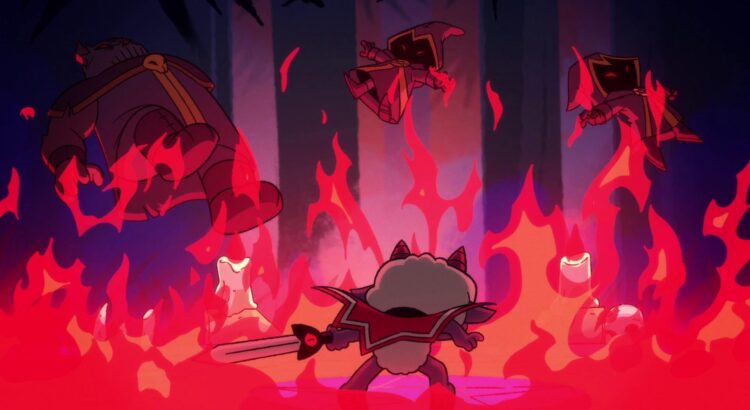 There are few times in games where being a dark lord isn’t worth it. Be it turning into a sith in Knights of the Old Republic or kicking your poor little minions around in Overlord, there’s an undeniable allure to being plain ol’ evil. Cult of the Lamb from developer Massive Monster and released by Devolver Digital plays into that concept by providing an incredibly fun avenue to be plain bad while doing so in an adorable way.

The main gist of the game is that you’re a hapless little sheep who’s spared from death just as you’re about to be sacrificed at the hands of the old gods. A banished entity only known as The One Who Waits recruits in order to do their bidding and satisfy their revenge upon their captors, and the path you take to do it to form a cult, of course.

The core gameplay loop of Cult of the Lamb is a back and forth exploration of the Lands of Old Faith, where the old ones rule and you are an invader who grows stronger and bolder with each run. You could call the game a roguelite, but since there’s only so much you can advance with each run, it’s more of a quick pick up and play affair, really.

That’s because each time you’re out you’re given an objective to fulfill, and in order to beat each of the four boss entities, you have to fill up a meter that requires you to defeat a boss at the end of each randomly generated map. Progression in Cult of the Lamb feels quite satisfying due to this structure of play since practically every time you run back to your home base, you’re guaranteed to see something new.

Whether what’s new is more followers, structure upgrades, or even a new power hinges on what you manage to pick up during your run as well as your actions while running around managing your cult. Your influence is fueled by the devotion dropped by your followers, and you can harvest more and more of it the further you level up a totem that sits in the middle of your camp. With it, you can spend said devotion to unlock new buildings and further grow your sect.

That said, I have to admit I ended up enjoying the whole management aspect of Cult of the Lamb way more than the combat itself. That’s not to say that the fighting isn’t good – it’s very tight and exciting, in fact, much like your typical roguelite or roguelike – but I found myself getting into seeing to my followers’ needs right away and treating the combat progression as more of the means to keep that going.

Then again, if you’re into the constant increasing progression of difficulty that’s typical in games of this genre, you will be a little disappointed with Cult of the Lamb, at least during its initial hours as your lamb is given a slew of powers and not much in offering powerful enemies to beat. I never found that to be a negative aspect to this game especially given that I’m generally terrible at roguelites and such, but it’s worth touching upon if you’re coming into this looking for the next The Binding of Isaac. It’s certainly not that.

It’s clear that Massive Monster wanted to make Cult of the Lamb into something more than just another dungeon crawler, and they’ve nailed it for sure. While it’s not as involved as a more tactical game like Evil Genius 2, where you have to be constantly on top of your followers in order not to blow your chances at winning, Cult of the Lamb offers just enough chaos to contain to keep you busy and constantly discovering new and exciting ways to exploit your followers and grow your cult.

There’s something to Cult of the Lamb that appeals to me, and it’s not just its brilliant delivery of micromanaging a cult. It’s deviously adorable in the way it prevents every single one of its gameplay aspects, not to mention its presentation, which is awesome in a way very few games manage to be with such simple character designs. Running around as the head honcho, the little lamb, is just darn hilarious and a bundle of joy, even when it involves killing enemies, breaking their bodies apart and collecting their bones for your next ritual. You probably won’t want to show this game to your grandparents!

Cult of the Lamb’s strength lies in its core formula, giving you great rewards for quick sessions and even better ones if you decide to stick around for even longer. It might leave you dry when it comes to combat, but its management mechanics and adorable aesthetic are sure to please those looking for something more in their next roguelite, making joining this cult a no-brainer for sure.