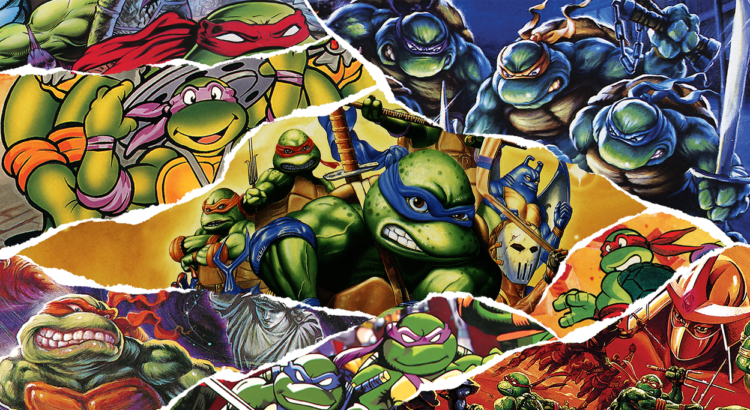 There’s something to be said about the lasting appeal that Teenage Mutant Ninja Turtles has as a brand. It started out as an underground comic in the 1980s and eventually boomed into a multi-million franchise that spawned cartoons, toys, clothing lines, records, movies, and of course, a whole bunch of videogames. Entire generations of kids grew up with TMNT, and thanks to waves of new shows hitting TVs all over the world every few years, it feels like they won’t be going away anytime soon.

Earlier this year, those of us that lived through the first wave of Turtles back in the mid-1980s and early 1990s got to relive some of our best gaming memories with Tribute Games’ Teenage Mutant Ninja Turtles: Shredder’s Revenge, a brilliant all ages homage to the classic beat ‘em ups that every kid with a Genesis/Mega Drive or Super Nintendo back in the day rented non-stop. And now, thanks to Digital Eclipse, we get to enjoy those old games in an entirely new light with Teenage Mutant Ninja Turtles: The Cowabunga Collection, a collection that manages to set an even higher standard to the retro compilation sub-genre.

Teenage Mutant Ninja Turtles: The Cowabunga Collection includes all of the Nintendo Entertainment System, GameBoy, Super Nintendo Entertainment System, Genesis/Mega Drive, and arcade games in one gorgeous little package full of frankly incredible bonus material. It’s a treasure trove of Turtle love that’s been put together by obviously fans of the source material, which shows in just about every nook and cranny of this collection. From the opening slice of TMNT theme music and presentation of all games included, to the museum menu that happens to take place in the sewer abode of our reptilian friends, the amount of care that’s been put into this is absolutely staggering.

It’s the sort of stuff like animation cells and frames, rough drafts of used and unused character designs, promotional material, scans for every single game’s box and manuals, a music gallery, stills from all the cartoons’ seasons, and even entirely new strategy guides for every title included in The Cowabunga Collection. It’s just plain ridiculous. And I haven’t even touched on the actual playable portion of the compilation yet. I’ve probably been spending more time flipping through the museum than actually playing, and that’s saying a lot considering how great some of these games have aged and how fun they still are to play.

Some of the TMNT games in The Cowabunga Collection happen to be simpler and less involved than others. The first couple of GameBoy entries, Fall of the Foot Clan and Back From The Sewers, are especially so. Their sprites are huge, taking up almost the entire screen, and the action is stilted and leans a bit too much into the easy side. They show how Konami was still getting a grip on the design of an action-adventure game that would both appeal to kids and an older audience at the time they were new. That becomes clear with Radical Rescue, the third and final GameBoy TMNT game that’s far and above the best of the portable bunch. It’s got a map and plays more like a modern Metroid, having you start out as Michalangelo collecting power-ups and saving your toitle brothers one by one.

Surprisingly, the NES entries are the most impressive of the bunch. Up until starting Teenage Mutant Ninja Turtles: The Cowabunga Collection, I had no idea that there was even an official port of TMNT: Tournament Fighters for that system. Living in Brazil, I’ve gotten to witness some of the less than legal incarnations of Street Fighter and even Mortal Kombat that were included in bootleg carts as a kid, but to my amazement, the one-on-one Turtles game is legit. Even though it’s clearly more limited than its 16-bit siblings, it’s very playable.

The rest of the NES TMNT adventures included are bonafide gems. The infamous first entry that stumped even the most hardcore of players including The Angry Videogame Nerd is finally available to play after being delisted from the Wii Virtual Console years ago. It’s as inscrutable as you’ll remember in the way it’s designed as a maze of sorts with a limited number of lives to burn through in the form of each individual Turtle. They play differently, each with their pros and cons, so if you happen to lose any of them, it’s a short hop and skip to simply getting stuck.

The other two, Teenage Mutant Ninja Turtles II: The Arcade Game and Teenage Mutant Ninja Turtles III: The Manhattan Project, are much closer in gameplay to the arcade games, offering a quality beat ‘em up time that still feels great to play through today, probably the best there is from that period alongside River City Ransom. And it’s even more so the case now with the added options included in The Cowabunga Collection that I’ll touch upon in a bit, as they help dial back the artificially cheaper difficulty that’s inherent to these brawlers.

Moving on to the 16-bit generation, things get way hotter as it’s the time where two gargantuans fought for player attention and wallets, with Konami racking in the cash by making games for both systems. Teenage Mutant Ninja Turtles IV: Turtles in Time, released for the SNES in 1992, is the most known of the bunch, the basis on which countless games got their inspiration on, including aforementioned Shredder’s Revenge, and it’s memorable for good reason. It’s Konami at its best, a gem that lives up to its fame as the most playable and fun of the bunch alongside its arcade counterpart.

Funnily enough, the Genesis/Mega Drive never got Turtles in Time. Instead, Konami came up with an entirely different game that used similar sprites and music from its SNES “competitor” in the form of Teenage Mutant Ninja Turtles: The Hyperstone Heist. Prior to this collection, I had no experience playing this and was pleasantly surprised by how close in gameplay it is to Turtles in Times, which I rented and borrowed to death when it was current and have since replayed many times over the years. It’s an excellent alternative and most worthy of your time.

I wouldn’t say the same for Teenage Mutant Ninja Turtles: Tournament Fighters. Quite the opposite, in fact. Konami’s hidden gem of a fighter on the SNES which rivals even the many iterations of Street Fighter II is but a very toned down, slow and plodding game on Sega’s console. It’s historically valuable to have it in Teenage Mutant Ninja Turtles: The Cowabunga Collection, but I wouldn’t recommend it over the SNES version at any point, other than the time you want to win an argument against someone over which 16-bit system is the best. Then you are welcome to boot it up, with my blessing.

They were watershed releases in the beat ‘em up genre. Together with other Konami releases and Capcom’s efforts in arcades with the multitude of releases such as Final Fight, Captain Commando, and Cadillac and Dinosaurs, to name a few, they paved the way to become one of the most popular gaming genres for a couple of decades not only in arcades, but also on consoles.

But the gravy train doesn’t stop there. Digital Eclipse went above and beyond with The Cowabunga Collection by not just merely throwing these emulated games together and calling it a day. There’s the usual bevy of options that we’ve come to expect when it comes to playing retro games in compilations like this. There are screen ratios and filters, as well as borders to toggle to your heart’s content, but the biggest addition has got to be individual settings that change the way each of the games in the collection can be played. And you can pick whether you want to play the North American or Japanese version of each game.

Those extra options work to make the slew of games in the collection much more playable. They’re basically cheats in some cases, like the ability to increase the number of lives, pick which stage to start on, or even turn on invincibility that help alleviate the cheapness of difficulty that’s baked into the NES brawlers, for instance, while in others they’re emulation tweaks that do away with limitations imposed by the original hardware. Such is the case for the original NES Teenage Mutant Ninja Turtles, where you can turn off sprite flickering and slowdown, making it that much more playable.

If you’re at this point still in doubt if this compilation is worth getting, well, you shouldn’t anymore. The fact that Teenage Mutant Ninja Turtles: The Cowabunga Collection includes the classic assortment of TMNT games in an easily accessible package is reason enough to pick it up. Now, add in Digital Eclipse’s extra efforts in making them better with the many different tweaks and online multiplayer, coupled with the insane amount of historical material that makes up the museum only go to cement that The Cowabunga Collection as a must-buy. That goes for just about anyone with even a passing interest in retro games, let alone a fan of Teenage Mutant Ninja Turtles. No ifs, ors, ands, or buts about it.