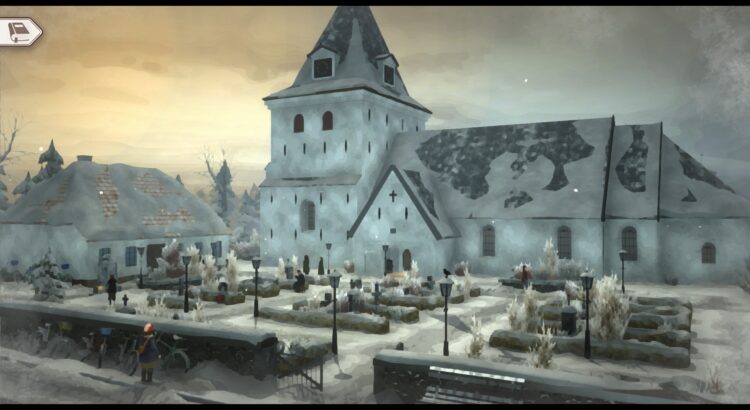 Despite being a rather avid amateur historian, I must confess that my knowledge of Danish involvement in the Second World War is limited. I knew that Nazi Germany invaded Denmark in 1940 and occupied it for most of the war, and that in retaliation, the United Kingdom invaded Iceland (which at that point was unified with Denmark under the same monarch). But regarding what life was like for the Danish under German occupation, or how resistance against their rule was fought, I had little knowledge. That was until playing Gerda: A Flame in Winter, a branching narrative adventure game from Danish studio PortaPlay, published by Don’t Nod, which has helped educate me on the topic tremendously.

The lead character is the titular Gerda Larsen, a nurse in the small Danish village of Tinglev, relatively close to the German border. The story follows the events during the closing months of the war, from February 1945. Gerda is married to Anders, a mechanic in the village who, unbeknownst to Gerda, is also involved in the Danish resistance. Gerda is half Danish, half German, and following her husband’s arrest on suspicion of sabotage, she must navigate through an increasingly tangled web of local villagers, Nazi collaborators, Gestapo officers and resistance fighters, each of whom has their own agenda.

The story is excellent and the large array of characters is nicely brought to life through some emotive dialogue, even though apart from Gerda’s narration of her diary entries, there is no voice acting. The game forces you to make awful, life and death decisions and then live with the consequences, and there are no easy answers or “best” paths available. Every decision is a trade-off, all of which can influence the flow of the narrative.

Most of the gameplay of Gerda: A Flame in Winter involves travelling around the village, talking to characters and then making certain key decisions, the ramifications of which can be large and small. Almost every conversation decision will affect some aspect of Gerda’s reputation; either to the Danish or the German population of the town, towards the occupying Nazi forces, or towards the resistance movement and its supporters. Likewise decisions will also impact individual characters’ opinion of Gerda, ingratiating herself with some people while becoming despised by others. For example, early in the game I caught a Wehrmacht soldier stealing pills from the cupboard of Gerda’s employer. Rather than dob him in, I asked him to give back the remainder of the pills except a few. This meant I received fewer painkillers from him (which went into my inventory), but my standing with him increased (although it later quickly declined after the same soldier attempted to steal Gerda’s mother’s pearl necklace).

Your inventory, reputation with groups and characters, in combination with Gerda’s compassion, insight and wits, will impact what decisions you can make in conversations.  Although it has some of the trappings of narrative RPGs such as Disco Elysium, Gerda: A Flame in Winter is more of an interactive story akin to Telltale adventure games such as The Walking Dead. In this manner, certain decisions are only possible based on earlier decisions, or earlier items you’ve managed to acquire. One of the earlier days in the game sees Gerda heading to the market to try and track down some cinnamon. Given the strict rationing, cinnamon is very rare, but the black marketeer has some for a price. Depending on your reputation with the townsfolk you can try to haggle with him, or else you’ll need to find other things to barter. Likewise the success of bartering hinges on whether you managed to find enough ration stamps to make decent purchases.

Compassion, insight and wits is recharged after each part of the day by making a choice in Gerda’s diary, which recounts the events you just played through. It is then “spent” when making conversation choices, which tend to ensure a positive or desirable outcome. When you run out of these points, the choice is no longer available, limiting you to more challenging options. Likewise there are also some skill checks, dice roll choices, the chances of success dependent on your affinity with the person you’re talking to, or the action you’re taking. Finally there are choices based on items you’ve obtained in your inventory, such as giving painkillers to your husband before he’s bundled off to prison (unfortunately in my playthrough I had none to spare).

Graphically the game takes inspiration from titles such as Kentucky Route Zero in its relatively low-poly, low detail environments and characters models, who are roughly equivalent to what you might expect in a PlayStation 1 game, except with a great deal more animation. The great lighting and the mournful soundtrack help to create a brilliantly cold and bleak atmosphere, especially when set against the snow-covered environments and the dark subject matter of the story.

Overall I thoroughly recommend Gerda: A Flame in Winter as a bold branching adventure game which is keen to tell the story of a relatively unknown part of the Second World War, in a mature and thoughtful manner. The in-game glossary helps to explain a lot of the historical backstory, as well as educate players in an elegant fashion. I’m looking forward to seeing what stories PortaPlay might decide to tackle next.