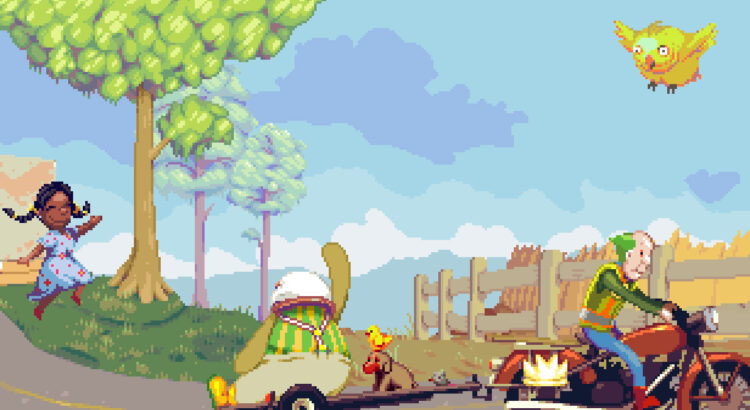 There’s no beating around the bush: clowns are scary. Some of the worst nightmares that I ever had as a kid, a clown was somehow involved. As with all comedians, it’s no exception to clowns that there’s always a darker side in even what seems to be the happiest of them.

Dropsy is a point and click adventure game that explores that idea in unique and incredibly clever ways. Developed by A Jolly Corpse in cooperation with Tendershoot, it was originally released by Devolver on PC in 2015, this otherwise unknown gem – at least to me – now arrives on Switch.

You play as the titular Dropsy, a man-child of sorts who happens to be a clown. He’s got a weirdly shaped body and a disturbingly sinister painted face, but all he wants apparently is to go out into the world and hug people. Inside, though, he’s disturbed by his own inner demons as a drama related to a fire in the circus has left plenty of scars.

And those scars aren’t merely psychological, as he’s shunned by the people of the neighboring town. The fantastic thing about Dropsy is that anyone can ascertain these bits of info without the game dropping a single line of text. Every single interaction that you have in it is based on pantomiming and pictures delivered through speech bubbles, even down to accessing options and saving your progress.

It makes for an initially confusing experience, and the fact that there are no words makes progressing through the game especially difficult. There are absolutely no hints to speak of, literally. At first, you get pointed towards a specific place in the town map, but there are plenty of obstacles in your way before you can get there. And until you break down the social barrier surrounding Dropsy, it’s hard to get anywhere.

That’s where helping people comes in. You can pick up an assortment of items along the way, as you would in a traditional adventure game, and you can use them in specific instances in order to solve any number of problems that you end up getting tangled with in your quest for hugs. Exploring the surprisingly big map in the game is important, even more so when you’re just looking for what to do next, which admittedly can be a pain due to how slow Dropsy moves about.

Then again, not all peoples’ problems are tied to advancing your “progress”. Some are merely there for more worldbuilding, or such is the case with this game in particular, getting more out of its limited communication method and shaping the backstory of not only Dropsy, but the folks that he meets while out and exploring.

Dropsy looks quite beautiful on the Switch. Portably, its pixel art graphics really pop off the screen, and on an HD display, the nuances of its presentation become even more visible. In all honesty, I was quite taken back with how disturbing and ugly the game seemed to me initially, but its art style quickly grew on me, as did its story delivery style.

Controlling Dropsy on Switch is passable at best. Mouse controls aren’t exactly suited when ported over to a controller, and the developers did what they could with the Switch JoyCons. You drag a cursor around with the left analog stick and interactions are handled by one of the face buttons. There’s a lack of precision inherent to not playing with a mouse, but it’s tolerable at best here, since outside of very specific scenarios, there aren’t a lot of interactable objects bunched up together for you to have to fumble with the cursor much.

The subject matter in Dropsy is shockingly deep, and in a similar way to Horace, a platformer I reviewed a while back, the more you play it, the more there is to uncover, and what might seem like a shallow premise at first eventually turns out to be anything but. Dropsy is just that. Layer upon layer of subtle storytelling in a way that’s rarely found in videogames today. I was moved by it and I’m sure you will be too if you give it a chance.