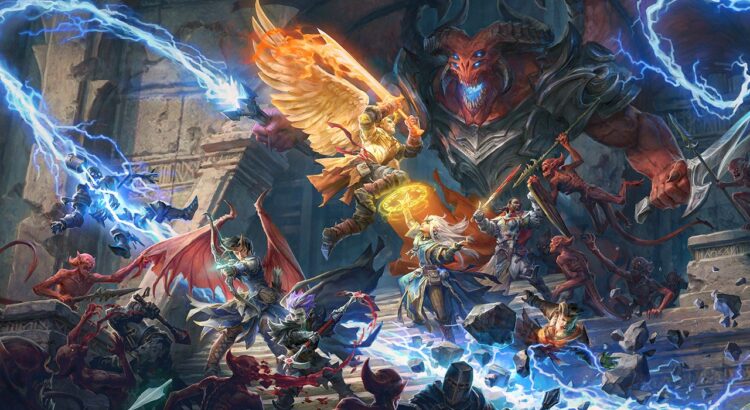 Pathfinder: Wrath of the Righteous was in the running to be one of my top games of last year, and the reason why it didn’t feel right to me to include it in my list was simple: I hardly made a dent in it. Even after playing it for nearly a dozen hours, it kept throwing new stuff at me, and in all honesty, it was kind of overwhelming. I didn’t feel I could properly review it for what it was and do it justice.

Pathfinder, for those who are uninitiated, is a set of role-playing tabletop games that follow a set of rules very similar to those of Dungeons & Dragons. The 20-sided dice rules your fate in it, and by all accounts, adventures built within this system tend to be extremely exciting and surprisingly fast-paced when compared to the usual D&D fare, but not without a very decent amount of depth to get lost in.

So it’s way easier to imagine a game such as Pathfinder making its way to PCs as a videogame than anywhere else. The PC is the home to top-down point and click isometric RPGs after all. And thanks to keyboard controls, there can be a humongous amount of possible combinations of shortcuts that can and are usually applied to tabletop conversions such as Pathfinder. One such game, D&D’s own Baldur’s Gate series, is a fantastic example of a successful adaptation.

But what happens when the even bigger leap of bringing over an established computer game to consoles? The answer can be quite tricky. Some, like Larian’s Divinity: Original Sin 2 managed to do so exceedingly well when others, Baldur’s Gate included, have failed to bring the PC experience to consoles by trying to shoe-horn mouse controls into touch screens or even to analog sticks. Just… no…!

For Pathfinder, this isn’t the first time on consoles. Pathfinder: Kingmaker made its way to PlayStation 4 and Xbox One back in 2020, and according to my pal Gareth, it was a cumbersome affair. Controlling the various actions available to the player felt unnatural and extremely awkward to him.

Under all of that, though, was an extremely immersive RPG that in the end was hard to pin down to a much more limited set of controls that are offered by a controller. And unfortunately, I can’t say that Pathfinder: Wrath of the Righteous works any better than its predecessor as it’s entirely the same deal as before.

Much like Kingmaker, there is an excellent game in Wrath of the Righteous just screaming to be funneled out through your controller. Owlcat Games’ work on providing a deep, rich lore that’s incredibly fun to get lost in is yet again present in this entry in the series. But thanks to the inherent limitations to console controls and the studio’s inability to come up with a more decent control and interface scheme only serves to undermine the sheer potential of the game.

Their solutions to making Pathfinder: Wrath of the Righteous more palatable to console players ends up being a double-edged sword. Having the ability to switch to turn-based combat definitely helps make encounters more manageable, while at the same time dialing the speed way back. On battles involving higher level foes or even a bigger number of them, it can take longer than you’d like simply getting to the end.

There’s still the option to tackle brawls in real-time, but as you’d imagine, fiddling with the extra layer of console menus all the while trying to be tactical is a very demanding task. And yeah, you could totally grow accustomed to playing the game that way, but why would you when you could just as easily play the much better version on PC?

Trying to simply manage your party also turns out to be a pain, requiring way too much effort to simply try to set who in your party can lead, for instance. Even selecting equipment requires an amount of finagling that could have simply been cut into a more traditional JRPG pause menu and it would’ve worked fine.

Then again, for those who game exclusively on console, I would say that daring to fight against the imposed limitations can be worth the effort. The tale spun around the Worldwound, a gateway to a dark realm full of monsters and evil deities which is just barely held shut by the power of a few powerful beings is very captivating, even more so when you’re thrust in the middle of the conflict and take pretty much any approach imaginable in order to solve the crisis. Or let it take over.

It’s a shame that there’s a need to overcome so much in order to enjoy an amazing PC game on console, but such is the case of Pathfinder: Wrath of the Righteous Enhanced Edition. As it is in this incarnation, the obviously better alternative is to just play it on PC, case closed. But if consoles are your only way of enjoying games and if you can get this at a nice discount, are gifted with enough patience and resilience, then it’s very possible you just might get something out of this port.