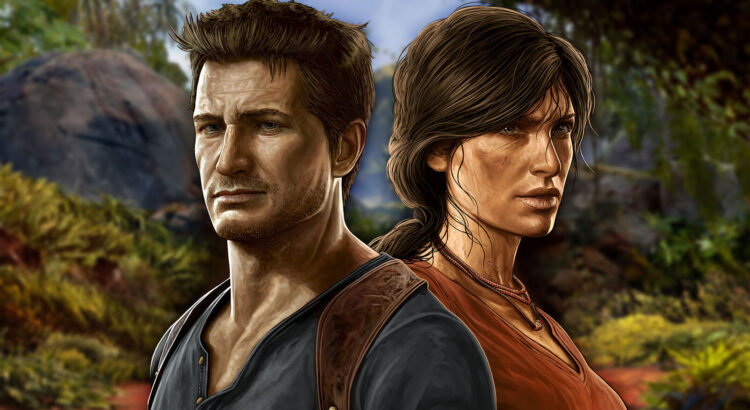 It’s ridiculous that a fan of Naughty Dog’s work such as myself has yet to write about this particular franchise for his own website. But here we are, nearly twelve years into my time at Entertainium, and I’m finally getting to talk about an Uncharted game. In this case, the PC port of last year’s Uncharted: The Legacy of Thieves Collection, which brings to Windows/Steam for the first time ever the last two entries in the franchise, Uncharted 4: A Thief’s End and its standalone sidestory, Uncharted: The Lost Legacy.

Both games were remastered, peppered with fancy graphical upgrades when they were brought over to PlayStation 5 in 2021, and this PC port is no different. Running this on an older i7 7600k, 24 GB DDR3 RAM, Windows 10 machine that was just recently upgraded with an ASUS Phoenix 3060 GPU, these are two of the best looking games I’ve ever played on a computer. Butter-smooth performance on ultra settings, I have yet to encounter any issues playing either of the games, and with native DualShock 4 support, it’s like I haven’t left my couch nor my PlayStation.

But what of the games themselves? It’s been years since the last time I’ve Uncharted 4, and hell, it’s a way darker game in tone than its predecessors, let me tell you. That makes sense, as it’s the first Uncharted directed by Neil Druckmann, who oversaw the development of The Last of Us. Along with Bruce Straley, they ended up taking over the project after Amy Hennig left the studio mid-development, in 2014. Hennig was responsible for the three previous entries and helped bring a sense of levity to them that’s certainly dialed down in Druckmann and Straley’s vision of Uncharted 4.

The game opens with a (for the time it was new) surprising reveal that Nathan had a brother, who up til now was never mentioned even once in any of the other games. Hopefully suspending your disbelief, you get to see even more of Nate’s days as a kid, before leaving the orphanage he grew up in, as he got into a nightly adventure with Sam, his older brother. A quick shift takes us to Panama, and his reunion with him as they are once again brought together under the pretense of finding a long lost treasure.

Things don’t go well and Sam ends up lost for dead, and the timeline shifts to the current one, after the events of Uncharted 3: Drake’s Deception, with Nathan and his now wife Elena, former reporter, living a comfortable life together. It’s been years since he last went treasure hunting and even more since seeing his brother, but it doesn’t take long before trouble comes knocking and he finds himself lying to Elena in order to make a new getaway.

Compared to the Uncharted games that came before it, 4 is a slightly more open affair, with some less linear levels that give you room to explore. Madagascar in particular even has you driving a Jeep across a vast map, and it’s certainly a welcome inclusion that was so successful it was repeated in Uncharted: The Lost Legacy. That, along with the grappling hook, went a long way into providing some much needed variety to the tried and true run ‘n gun and then climbing spiel that’s been the series’ bread and butter for years.

Overall, Uncharted 4 serves as a great conclusion to Drake’s story and it’s a fun, although perhaps overly long adventure with the high production values that current day Naughty Dog is known for.

Uncharted: The Lost Legacy started out as DLC for the fourth game in the series, but ended up becoming a standalone title. And it’s much better for it, because it was given room to be its own thing. Chloe and Nadine’s frenemy relationship is deliciously explored in this, which could easily be considered the best of the Uncharted games. And coming from me, someone who’s a big fan of the franchise, it’s saying a lot. Their back and forth throughout The Lost Legacy is a highlight, and well, the action is another. It’s the tightest in gameplay out of all of Uncharted, and side by side with 4, it’s a definite winner.

And perhaps because it had different directors, Kurt Margenau and Shaun Escayg, the tone of Uncharted: The Lost Legacy managed to bring back the humor that was sorely less of a thing in Uncharted 4 without compromising the swashbuckling nature that’s a trademark of the series, even if the game didn’t star its main protagonist. Instead, having two incredibly strong female leads played by Laura Bailey and Claudia Black gave The Lost Legacy some extra punch, and even if it doesn’t come close to any of the previous games in length, it more than makes up for it with the scenes these ladies share.

It’s cool to imagine that this will be the first time checking out Uncharted for a whole new audience, as they’ll get to experience two of the best games in the series in a single concise package. Then again, I have hope that somehow if the sales justify it, Sony will eventually port the excellent Uncharted: The Nathan Drake Collection, a compilation of remastered versions of all three PlayStation 3 entries, released years ago on PlayStation 4, thus providing PC users with a complete selection of Uncharted.

Until that isn’t a reality, they’ll still have the best looking and sounding versions possible for two of the last great PlayStation 4 entries in Sony’s fan-favorite series with Uncharted: The Legacy of Thieves Collection. Who would’ve thought this would ever happen in the first place?