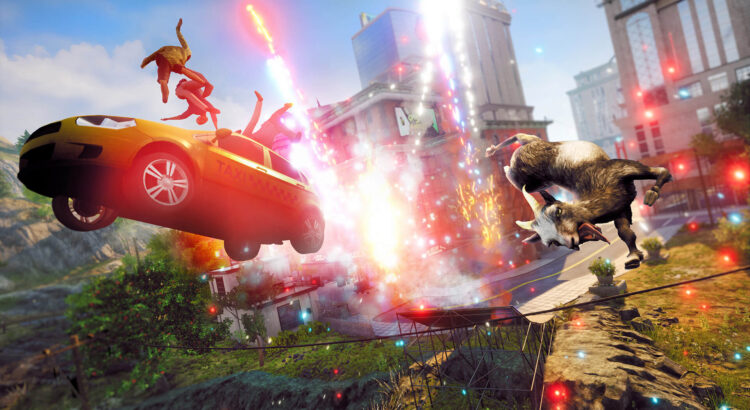 I think it should be acknowledged upfront that Goat Simulator 3 opens with an extended Skyrim joke. It’s 2022, and apparently that’s still happening. Be that as it may, this crime shouldn’t be held against the rest of the game. Goat Simulator 3, despite the name, is the second instalment in the Goat Simulator franchise, after 2014’s original game. As an explicitly comedic and satirical series poking fun at both simulator video games and the video game industry more broadly, Goat Simulator 3 is simple, easy-going, wacky family friendly fun. And sometimes, that’s all you need.

I like to think of Goat Simulator 3 as the spiritual successor to games like Lego Island which don’t really exist anymore; it gives you a big open world where the objective is just to have as much wacky fun as possible. Back in the era of Lego Island this was more limited and amounted to taking some missions and racing, but in Goat Simulator, the possibilities are much more wide-ranging. As Pilgor, the world’s most dangerous goat, you’re given complete free-roam to head-butt, jump, lick and cause as much mayhem as you can. Your goat is unkillable, meaning Pilgor can be flung into various deathly situations, always emerging eventually unscathed.

Goat Simulator 3 is a whole lot bigger than the first Goat Simulator was, in basically every regard. The map is now pretty enormous and covers an entire island land mass including farms, towns, a city, and much else. The archipelago is named San Angora (clearly inspired by Grand Theft Auto’s San Andreas) and is full of in-jokes, easter eggs and other weird little jokes. There are a variety of NPCs wandering around who can be attacked in various nefarious ways, all of whom ragdoll satisfyingly. Indeed, this “simulation” is always on the verge of tearing itself apart, as I encountered a gas station exploding after a fire truck drove into it, entirely without my involvement. Like GTA, cars can now also be hijacked and driven around (the goat sticking his head out of the window while driving, naturally).

Around the world, you’ll encounter a variety of silly side objectives and missions, for example, finding the key to the gas station bathroom, or helping move a house in the path of a freeway construction. Completing these objectives gains you points, which can be used to either unlock customization options for your goat, or can be spent upgrading the “Goat Castle”; a warp-zone you can transport to if you visit any of the goat towers scattered around the island. “Synchronizing” with a goat tower unlocks an area of the map, in a manner which is a deliberate homage to Ubisoft’s Far Cry and Assassin’s Creed franchises. Some missions will involve references to other games, such as when I entered the cellar of an old woman armed with a bazooka, only to be transported into a map from Wolfenstein 3D.

Multiplayer has also been added, allowing up to four players simultaneously to join a world, making their own hijinks as well as engaging in various team activities. The team activities are exclusive to multiplayer, so if you’re on your own you’ll either need to team up with randoms, or skip them. The goat customization options are, to be frank, completely absurd. You can change Pilgor’s clothes, equip him with different shoes, feet, horns, hats, shirts, colour styles and weapons, as well as completely swap him out for different characters, such as a pig, giraffe, or you know, a shark riding a skateboard. Thanks to the insight system, which provides points for achieving mini-objectives around the world (like grinding on telephone wires or doing tricks while in mid-air), you’re always earning a constant stream of points which can be spent unlocking more random nonsense to equip your goat. My favourite so far was the fireworks launcher, which can be shot at both pedestrians and objects, causing them to fly wildly into the air and explode in a beautiful lightshow.

One issue with the game however is performance; the draw distance on objects and NPCs is remarkably low, and when moving around the world quickly or causing a lot of mayhem, the framerate can suffer quite a bit. Hopefully this is something which can be addressed in patches. Likewise the music is fairly repetitive, being one looping track for certain sections of the island, which was exactly how Lego Island handled it 25 years ago.

Goat Simulator has been criticized from some quarters as being simply a meme game, and I think this is something which the developers at Coffee Stain have acknowledged, and doubled-down on. Goat Simulator 3 is undoubtedly a meme game, but that doesn’t mean there isn’t also some meat behind the memeing. Goat Simulator 3 is deliberately mindless, easy-going fun, with no plot to speak of and activities designed to give you an easy laugh. Its brand of humour is a somewhat acquired taste but I will admit to chuckling at the absurdity of many of the situations you can get into with a goat who knows no fear. Goat Simulator 3 is a bigger, more action-packed version of the same madcap wackiness which many enjoyed in the first game, and I suspect for most players, that will be the bee’s (goat’s) knees.