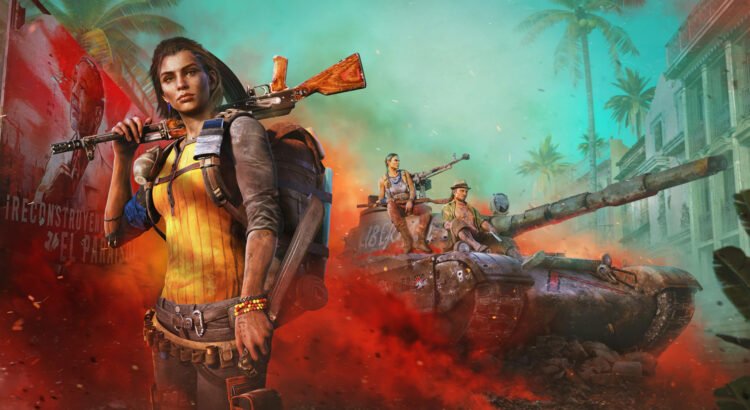 With Ubisoft’s ongoing scandals involving a number of their studio members and heads’ abuse of power in the form of sexual harassment, even going as far as having the company’s CEO go under scrutiny for his lack of punihsing action towards offenders, it’s a little hard to be particularly excited about any of their new releases.

So our hearts go out to those who ended up being victims in these abusive workplaces. We sincerely hope that Ubisoft as a whole can get their collective crap together and make the folks who work there feel safe and appreciated, which is, honestly, the least they could do and should’ve been doing in the first place.

And now, the review…

It doesn’t come as a surprise that Far Cry 6 sticks so close to the series’ formula. Ever since the third entry, which followed Ubisoft’s takeover of the franchise from Crysis’ studio Crytek, Far Cry has been all about a charismatic villain putting on a show while you, the player, act as an agent of chaos whose ultimate goal is to overtake them. Sure, there’s plenty of stuff to do before that, or if you prefer, solely focus on, as these games’ open-world structure tends to favor wrecking havoc over anything else. They’ve always been fun environments to dick around in for sure, and Far Cry 6’s Yara archipelago doesn’t fall behind any of the previous games’ maps.

This time you take on the role of Dani Rojas, an ex-military Yaran escapee who wishes nothing more than to reach US shores and start fresh. Things don’t go according to plan as they end up joining the resistance movement Libertad in order to take down president Antón Castilllo, played by Breaking Bad and The Mandalorian’s Giancarlo Esposito. Under the promise of filling everyone’s pockets with pesos through the production of a miraculous cancer-curing drug called Viviro, Castillo has the country in his fascist iron grip, enslaving and poisoning the population in the process of cementing his power.

Esposito’s Castillo is as devious of a Far Cry villain as you’d expect and his delivery in the many cutscenes that feature him and his son evokes Gus Fring’s menacing calm but still incredibly cruel demeanor. Sadly, differently from say, Far Cry 4’s Pagan Min or even 3’s Vaas, you don’t get to interact with him as most of the storytelling involving Yara’s tyrant don’t intersect directly with Dani’s, which is a shame considering it was through that that we got Far Cry 4’s coolest easter egg.

Ubi might try their best (worst?) to come out and say that their games aren’t political in any way, but Far Cry 6 in particular is very, very politically charged, as much as Watch Dogs: Legion also was. Similarly dipping its toe in the shameful current of resurgence of far-right governments in the world, the story and setting of Far Cry 6 also freely and unashamedly borrows from Latin American history, only changing a few names here and there, mixing it all up in a salsa and Español expletive-heavy pastiche of post-colonial mayhem. All for good fun, I guess?

Well, if you can turn your brain off and just sit and play Far Cry 6, sure. All in all, it’s as enjoyable to jump around and blow stuff up as any of the games that came before it. Mission structure and progression-wise, if you’ve played any Far Cry after the criminally underappreciated Far Cry 2, you’ll be ready for whatever the sixth numbered entry has in store for you. That means taking over different territories in the map, gaining the trust of potential allies and eliminating the big baddie’s lieutenants before going all in after him. It’s definitely derivative, but it sure as hell works if you’re in for this sort of gaming experience.

Yara is a gorgeous setting to be sure. I’ve been playing it on an Xbox Series S and every inch of the archipelago is a sight to behold. There’s a whole lot of nature to explore through jungles and beaches, which also include short stretches of decayed urban locations that really pop with color, even when driving your tank through them or parachuting in from the burning husk of what used to be a helicopter. The map is also quite large and will take you a bit to fully explore, which you should really do while delivering Libertad as it’ll help you get around faster via numerous fast travel locations.

It would be unfair to say there’s absolutely nothing new to Far Cry 6. The addition of the Supremo backpack accessory adds a slight degree of customization to your approach in regards to missions by giving you a very overpowered area of effect move in the form of explosives or an EMP blast, to name a couple. Then by investing materials you scavenge around Yara, you can upgrade these and unlock a host of tickets. Unfortunately, I didn’t find the stealth in this entry as enjoyable simply because it’s much faster to just come in guns blazing, or better put, rockets flying over any other way to play.

And of course, it wouldn’t be Far Cry or any kind of open-world game if Far Cry 6 wasn’t riddled with hilarious but more often than not aggravating bugs, like disappearing vehicles, crazy physics that defy reality. But the worst by far is tied to both general NPC A.I and how easily it breaks and refuses to follow the simplest of routines. Be it merely fighting you, in the case of Castillo’s forces, where sometimes they just prefer to stand around and do nothing, or when your companion doesn’t feel like to keep up or take you wherever is needed for a mission objective. Then there are the handful of technical ones that managed to pop up within minutes of starting the game for the first time, such as audio failing to play during dialogue and the fan favorite, a few crashes to the dashboard.

Unlike Assassin’s Creed, which has gotten a revival that is almost begging for a turnaround of its own already after an excellent reboot with Origins and two continuously bigger, busier and exhausting sequels, Odyssey and Valhalla, Far Cry’s still playing by the same basic structure for over seven games at this point. Far Cry 6 might be good when put side-by-side with what came before it for sure, especially Far Cry 5 — the less we say about that one, the better –but it also shows that the series is in dire need of a good shake up. Yeah, that’s wishful thinking on my part as it’ll probably sell a boatload and Ubisoft will likely be happy to just keep pumping these out as they’ve been doing for years.

Undeniably, Far Cry 6 has enough to keep you busy for hours, not including the post-release DLC that still has yet to be unlocked. Now, whether or not these will be quality hours will depend on if you don’t mind to the (let’s say ‘unique’) brand of humor that has always been a part of the franchise and the bafflingly hands off approach Ubisoft has with the themes that they most certainly knowingly injects into their games. It’s yet another Far Cry, for better or for worse.