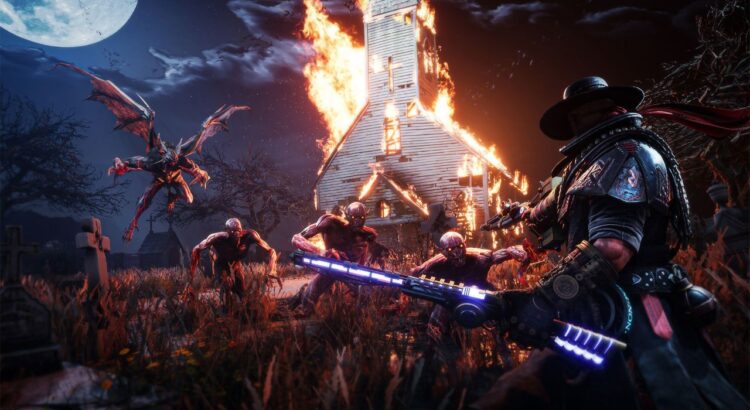 Evil West pumps new blood into linear, third-person action games, and does it in style. With a focused design and exhilarating combat, Polish studio Flying Wild Hog strikes back against the monotony of open world games. Evil West is a bloody good time which recalls some favourites of years past – and in a crowded field, it’s also the best Old West-themed game of the year.

Here, vampires are a dark fact of life. The United States’ one line of defence is a unique agency, the Rentier Institute. Gruff field agent Jesse Rentier is thrust into the fray when a devastating attack heralds a deadly new vampire conspiracy. Jesse’s bid to save the U.S. is structured as a sequence of fairly short, broadly linear levels punctuated by pre-rendered cutscenes. Evil West is one long, gripping monster mash, lit by fire and bathed in blood.

Like Shadow Warrior 3 before it, this is a game built with a laser-like focus. There is no bloat – no busywork, side-quests, or open world box-ticking. The team have again set their sights firmly on pure fun factor, and have hit the mark. It’s a looker, too, with the team showing off their solid grasp of Unreal Engine 4 in a succession of vibrant, varied levels.

Evil West is built around combat that in its own way, is nearly as good as the fighting in Sifu. Equipped with the Institute’s gadgets, Jesse is equally accomplished at range and in hand-to-hand. His options expand gradually, from a simple punching combo to a graceful dance of death that encompasses a great variety of gear and perks. Every confrontation is a thrill, from smashing an undead gunslinger into a stack of TNT to extended brawls with a dozen enemies or more.

Progression comes partly through gadget upgrades bought with scavenged cash, and partly through levelling up to acquire new perks. Battles scale in lockstep with the player’s power; Flying Wild Hog has done a meticulous job with designing progression. The player is taught to deal with new threats individually, and then has to figure out how to tackle them in combination. Unpicking complex situations requires not just a fast gun, but a genuinely deep grasp of Jesse’s evolving skillset.

Enemy variety and designs are one of the studio’s long-established strengths and Evil West is no exception. The vampires here are far from your suave Count Dracula type; when cornered, they transform into towering “highborns”, grotesque fusions of man and bat. The game’s ghost towns, oil fields, and foetid swamps are populated by a whole grisly ecosystem of bloodsuckers. The art team have gone to town with brilliantly creepy monsters which mix human beings with bats, leeches, spiders, wolves, and other creatures of the night.

The monsters aren’t just great to look at – they each pose a unique threat whether alone or in combination. Werewolf-like nagals, for example, can dodge bullets and howl to buff the power of their packmates. Higher-tier enemies are often the centrepiece of the game’s arena encounters. The hive crone is a good example; this floating monstrosity is orbited by nests of vampiric insects which protect it from gunfire and enhance the resilience of nearby lower-tier foes.

The smooth animations and gory finishers greatly enhance the action. Delivering the coup de grace to stunned enemies is one way to recover Jesse’s health mid-battle. Through the perk system, the player can craft their own style of play – for example, by choosing to what extent they rely on electrically-charged attacks, and on gathering the energy that fuels them. Evil West encourages and rewards skillful play – it feels great to deftly bully enemies around, to survive a tough arena, or to consign a vampire boss to a final death.

Between the regular set pieces, there are short periods of atmospheric exploration, simple environmental puzzles, and smaller skirmishes. This structure again recalls Shadow Warrior 3, but this game is much longer at around 12 hours. While the levels are linear, exploration is always rewarded. Observant agents will find snatches of lore, bags of cash, new item skins, and even hidden perk unlocks.

Despite some confusing moments and a fumbled opening, the narrative is solid. Jesse is a relatively bland Eastwood pastiche, but a good fit for this style of game. The good guys are mostly cloying distractions and the villains are the real stars of the show. The narrative will come across oddly in the two-player co-op, in which both players play as Jesse – this mode can feel like an afterthought, albeit a welcome one.

Evil West is a great antidote to today’s sprawling, open world “forever games”. Its refreshingly tight focus recalls classics from earlier generations. Vampire hunting in the Old West is simply a perfect framework for the gory but cleverly crafted combat which Flying Wild Hog does so well. Those with an Old West action game on their “most wanted” list need look no further.