There are times when “throwing the kitchen sink in” works extremely well in games. Examples of that method of game design are aplenty, but the same can be said about the opposite, when putting too many systems into a game without honing any of them particularly well only makes it a bloated mess. Vampyr sits at the middle of these two definitions, and thanks to its many teeth, it could’ve been one hell of a game, but it lacks the polish, care and common sense that would’ve made it so. It lacks the bite it could’ve had thanks to that.

Set in London right after the end of the first World War, as the Spanish Flu was taking ahold of Europe killing thousands in its wake, you step into the shoes of Jonathan Reed, a famous doctor and blood transfusion expert fresh off from the battlefront. Things aren’t great for Reed, though, because as soon as he touches down in jolly ol’ England, he’s turned into a vampire, and worse, ends up killing his estranged sister in the process, which causes the local vampire hunting crew to turn their gaze towards him. It doesn’t take long at all for Jonathan to get mixed up with a London wide conspiracy involving a plague, secret societies and guess who, his newfound bloodsucking buddies.

At the outset, during the couple of times I got to see Vampyr at E3, it was played up to be another take at the Mass Effect school of game design, that is, a third-person action-adventure game that would pit players against the moral quandaries of being a vampire. Do you kill everyone on sight and suck their blood, making yourself as powerful as possible, or spare the citizens of London and focus on being a caring, decent creature of the night, all the while fighting forces that want to end you regardless of your moral standing? In somes ways, Vampyr somewhat succeeds in providing that sort of experience, while in others, well, it fails horribly. 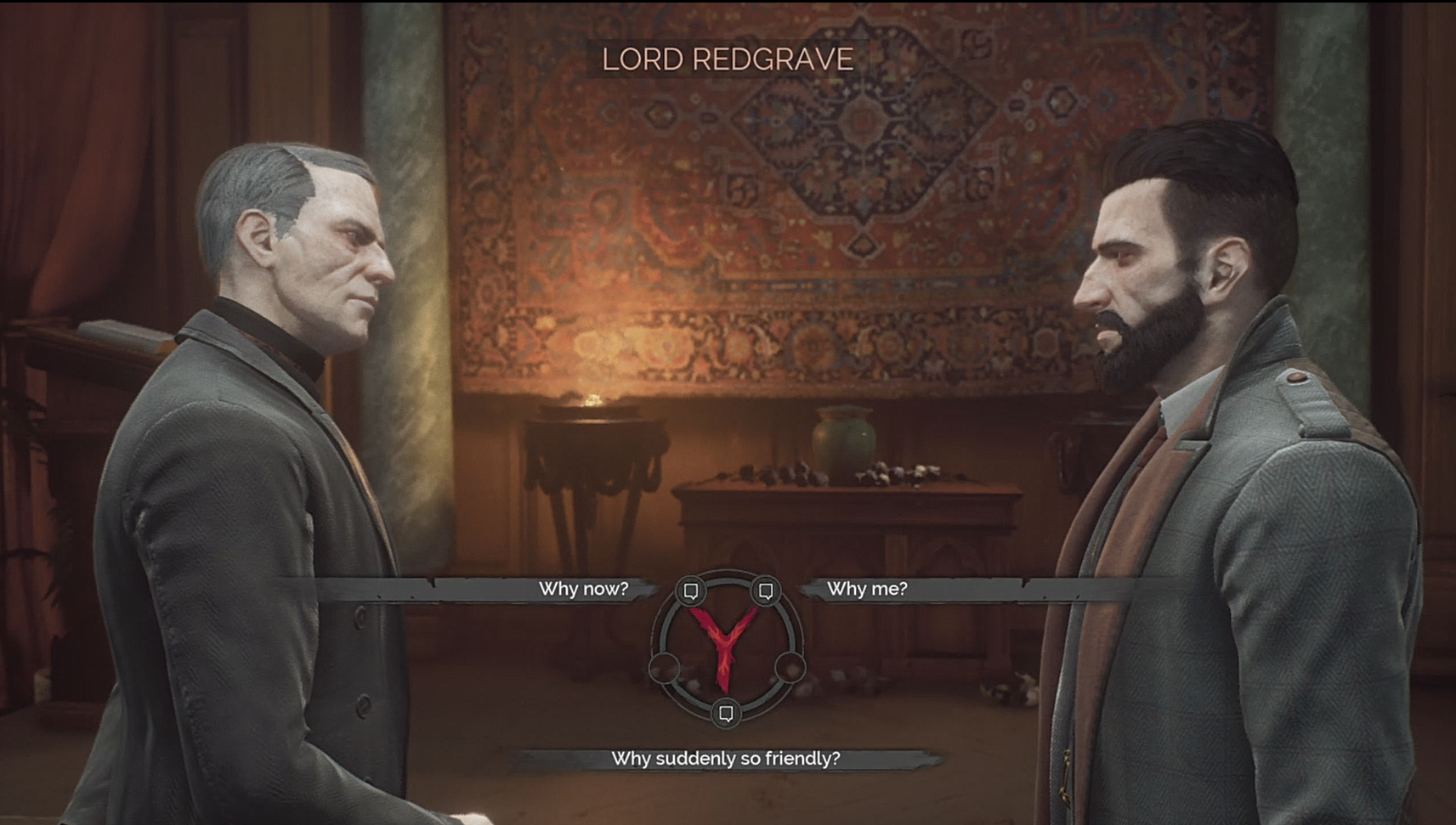 Let’s start with what it does get right: the setting. Developer Dontnod has managed to build a believable facsimile of early 20th century London during those dark times in its history, and the sense of ambience at the beginning of the game is really well developed. Dark, dirty corners and boarded up buildings really help convey the sense of hopelessness, and the hospital where the beginning to mid-game take place does a fantastic job in representing how medicine was done in that time, the conditions of veterans returning from war, as well as the clash between the newly impoverished rich and the poor when both come to be treated at the same rundown establishment. Even classic London locales that were made famous by not so great means are really well established, such as the dark district of Whitechapel and its cemetery, where Jack the Ripper made his killings. All in all, it looks and feels fantastically horrific.

That visual design coupled with an excellent score that makes brilliant use of cords and percussion in a similar way Assassin’s Creed Syndicate did, along with some decent to good voice acting and eery environmental sound design makes Vampyr a great game to play on an HD screen and a surround system (or good headphones). It’s obvious that a lot of care went into make Vampyr’s world feel dark, gloomy and oppressive, and in that regard, it absolutely succeeds.

The same can be said about the cast, who’s mostly well-written and developed. Funnily enough, Reed’s the one with the least amount of character out of the main group, but even so, he makes for an interesting protagonist, even if he’s so comically developed in terms of background and eventual transformation to being beyond human. Still, that play eventually leads to some interesting interactions with the citizens he runs across, who he can either help cure, as a doctor that he is, or consume in order to satiate his thirst as a vampire. 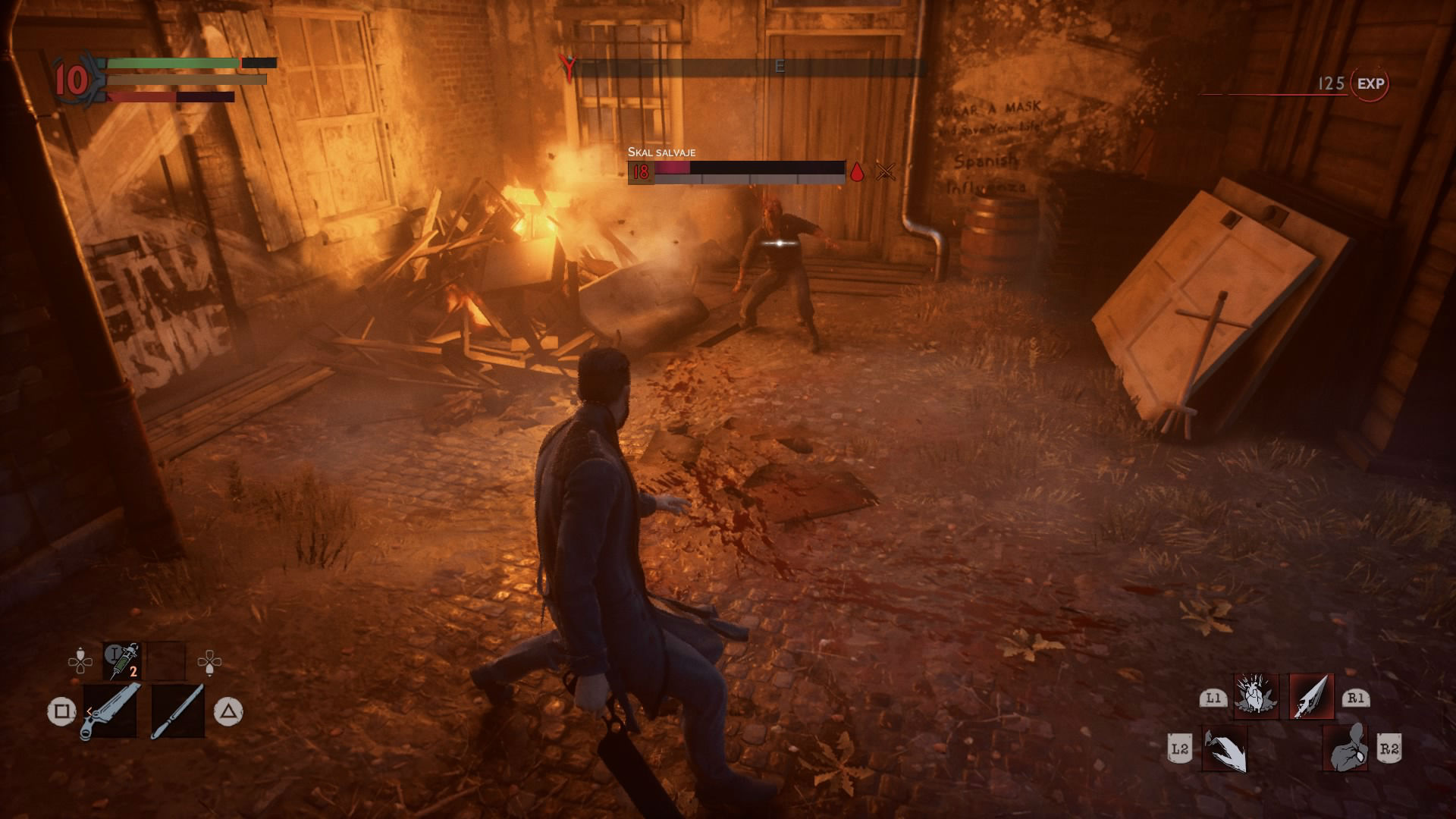 Almost every interaction with these people feels natural, although the means with which you develop relationships with them is kind of trite, since not all dialogue options are open from the get go, and in order to really “break” your options open, you’re required to scour the world for collectible papers, or talk with other characters in hope you’ll run into that unlockable ‘ting’ that indicates you have an alternative option when approaching someone. This ends up being a little convoluted and at times, infuriatingly obtuse, thanks to the clash between the design philosophy of living with the consequences of your choices and how they’re actually conveyed by the game, read: pretty badly. Thanks to autosaving, you’re usually left to dry after something you might inadvertently do that causes an entire questline to fail and become unavailable for the duration of your playthrough. And it’s a shame really, because most of these stories are really good, like the series of missions that involve having to protect and investigate an immigrant family’s disappearance and the macabre circumstances surrounding the case.

That system is only one of the many that Vampyr tries to build its whole experience around and ultimately fails. The combat in the game is an aberration in itself, and feels like a relic pulled straight out of the early 2000s and the polygonal action-adventure games released on the original Xbox. Terrible hit detection coupled with a seemingly huge hit box for your character and a very limited stamina bar that leaves you gasping for air after only a few swings of your mallet makes even the simplest of brawls into a mess of a thing. And don’t me started on boss fights. Some of them might take you many, many tries before you get through them due to how sluggish Vampyr’s controls can be, and how bad the dodge still leaves you vulnerable even after you’re supposedly out of harm’s way. That coupled with the laser accuracy of boss enemy attacks makes some of these encounters a pain in your teeth.

Speaking of being a pain, navigating the city at first is one because most of the paths are blocked off by barricades, but eventually becomes a little easier as you unlock shortcuts doors that connect the city districts. The map in the game is absolutely abysmal, and is especially useless when missions require you to look for particular items or characters, simply adding a huge red circle around an area that doesn’t help you find anything, and in some cases, doesn’t even encompass the thing or person you’re looking for. Even quest markers tend to be comically imprecise, magically disappearing when transitioning between areas, or pointing out to places you’re still not able to reach and not giving you any indication of that. In fact, the menus and HUD in Vampyr tend to be confusing and hard to deal with, usually unclear as to what you’re exactly supposed to be doing, or even how to choose the thing you want to be going after, be it a side quest or even a main story event. I lost the count of how many times I wasted time trying to reach an objective that simply wasn’t available at that time because the marker pointed me to a place that couldn’t be reached at that point in the game yet, or worse, due to a bug that rendered a mission impossible to finish.

Vampyr’s character development system helps alleviate the combat issues somewhat, if only a bit. Every interaction in the game arbitrarily nets you blood which acts as experience points which you can use to upgrade Reed’s vampiric abilities, and his stamina and health bars. Powers are split into a few categories like stealth, aggressiveness and manipulation. The former of them, stealth, is particularly useless because there’s no form of actually being stealthy in this game, hilariously so considering the subject matter and who the protagonist is. Anyway, the aggressive ones are the powers you’ll want to invest in, because they’re the ones that do the most damage, duh, but trust me, you should look into getting combat done with as quickly as you can. With every power comes a development tree that continuously uses more blood to upgrade and is tied to your character level.

That level also hangs its hat on how difficult your combat encounters can be, as well as the number of folks you can eventually consume in order to be stronger. The higher the gap between your current level and the people you want to fight or dominate, the more difficult it is to get on top of things. Yeah, that might sound like an obvious thing to point out, but that gap in difficulty is ridiculous in this game, not to mention very ambivalent, because in some cases you can absolutely beat the tar out of an enemy who’s ten levels over yours, or the same can happen to you if you happen to bump into a couple of low level suckers on your way to your next objective. It’s one of those overlooked aspects that broke that sense of immersion and enjoyment of a game for me, because there are plenty of moments where that happens all throughout Vampyr.

My entire time playing this game was a mix of being honestly in awe and having fun with its lore and twists on historic events, and being absolutely flabbergasted at the poor design decisions that were greenlit. I really wanted to love Vampyr and overlook its many issues. If this was a game released about ten years ago, I would totally done that. It shows a level of ambition that few games that are not AAA certainly lack. But its execution and the fact that even the same developer has achieved a much better (albeit still flawed, admittedly) result in their previous game, Remember Me, coupled this being 2018 — and how there are numerous other similarly scoped games that managed to be successful in their execution — makes it hard to recommend Vampyr. That is, unless you’ve got a tremendous amount of patience and tolerance for repetition, as well as a love for its subject matter and the time period it’s set in, which are this game’s strongest assets. And even so, it’s a tough pill to swallow.

Review: On the Road Again with Hitchhiker https://entertainium.co/2021/04/30/hitchhiker-review/

Review: You’ll be hard pressed to find a game like Nier Replicant in 2021 https://entertainium.co/2021/04/22/nier-replicant-review/