Australian studio League of Geeks’ Armello was already an excellent game to begin with back when it came out in 2015, and now, as it follows the trend of indie games being ported to Nintendo’s wonderful little portable/console mishmash, it shines on the Switch. That’s partly thanks to just how unique Armello is to begin with, a tabletop gaming inspired RPG set in the wonderfully dark Game of Thrones-ish world of Armello, where animals rule and are particularly keen on backstabbing each other in order to get on top of the food chain.

The menu-based gameplay makes the transition to Switch extremely well, and even though the system isn’t as nimble as the Wii U when it comes to its touchscreen, handling everything through controller inputs works quite well. Regardless of how you’re running your Switch setup, docked or undocked, in handheld mode, Armello is very easy to pick up and play, made even more playable in short bursts thanks to that system’s inherent suspend feature.

If Armello’s incredibly charming and well developed lore, writing, and visuals weren’t enough to make it one of the most enticing pickup for Switch, its gameplay is also a blast to get into. By either playing the game on your own or jumping into multiplayer against other dirty humans, you play Armello by controlling one of its factions, each one represented by a different animal, and dice roll your way to the throne. The single player story component is probably the best way to start playing Armello, since it works as a tutorial of sorts that helps ease your way into the game, as well as into its lore, the tale of a world once again thrust into chaos by the resurgence of a deadly plague known as the Rot. 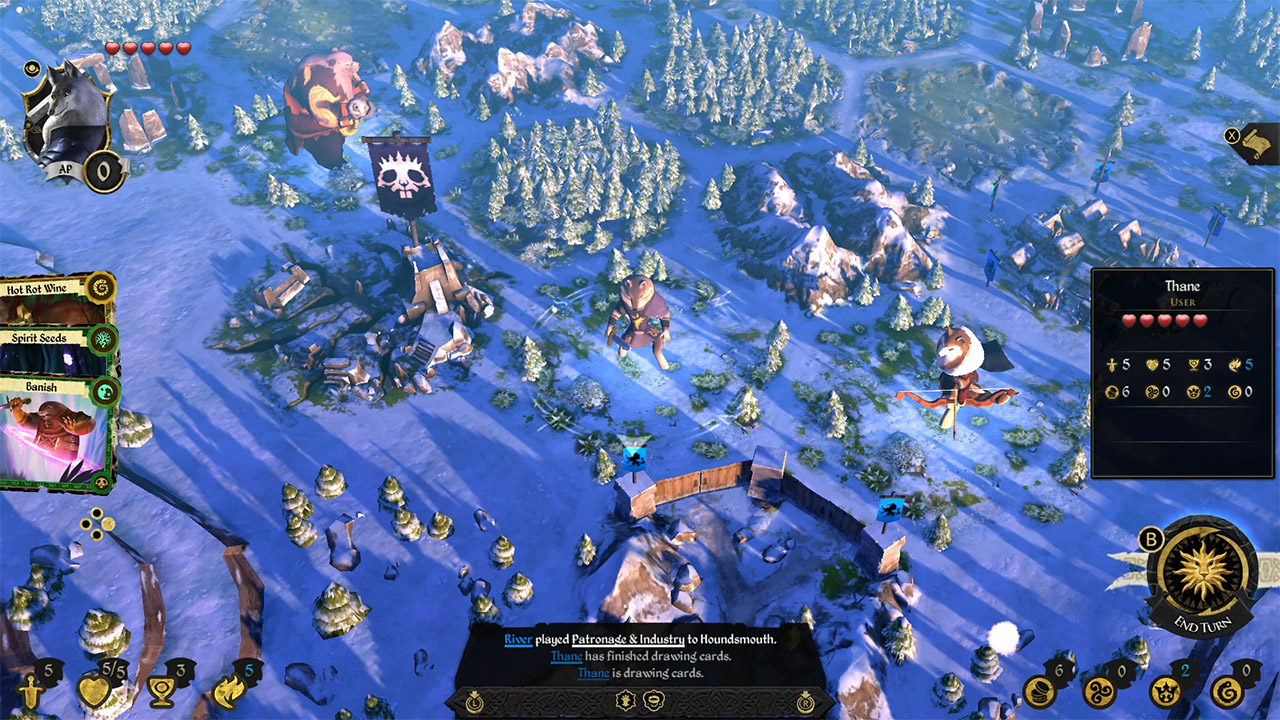 Your path through the game is tied to just how you want to role play whatever character you go with, up to their decisions in regard to the different situations that pop up as you make your way from objectives. Be it deciding whether or not you want to engage in a fight for the chance to get more loot, or simply play a more pacifist and neutral role in conflicts, every single crossroad you come across determines just how well or badly things can go for you in both the immediate and long run. If you decide to go for the more dangerous option, your luck will be decided by a RNG roll, which can pay off, or, well, not. The easiest option is to take the safest approach, but funnily enough, as it’s to be expected, the times I went with this often resulted in having a less than stellar times playing Armello, not only due to how boring things can get by merely rolling with the determined path, the rewards that come walking the tightrope eventually help make the challenge more tolerable, which goes to show just how well balanced the game got tuned by the developers.

When things get down to the nitty gritty, combat plays out the same way it would an actual table top game, that is, via actual dice rolls. Even in this, there’s an added level of depth that influences just how well you do in confrontations. Take for instance Thane the wolf’s faction, who does better in combat by engaging enemies during the night, granting him a bonus dice, but that layer also comes into play through the six sides of the dice, each with a different effect to combat — the sun gives you a hit during the day and negates it at night, the moon does the opposite, while the worm and the wyld play around with the concept for corruption, each working as bust damage multipliers, alongside the hit and defend sides, which speak for themselves. It’s a fun and quick to get over with system for combat, making Armello feel snappy, especially so on Switch.

For as much as it’s taken for Armello to get to Nintendo’s portable, thanks to the deep systems, consistent writing, and fantastic art direction, it continues to shine as a port three years later. This has been my first real time playing this on my own — watched videos and read many reviews since its release — and I’m positively impressed with just how fun it is. If you’ve been similarly reticent in giving Armello a shot yourself for whatever reason, it’s more than worth it to do so now that it’s on Switch.

Review: Monster Hunter Rise is one of the best entries in the series https://entertainium.co/2021/04/01/monster-hunter-rise-review/

Review: It sure pays to be the villain in Evil Genius 2: World Domination https://entertainium.co/2021/03/29/evil-genius-2-world-domination-review/

Review: Cathedral is a sprawling adventure you’re sure to get lost in https://entertainium.co/2021/03/25/cathedral-review/