How do you make an already hectic and difficult cooking game like Overcooked 2 even harder? Backpacks.

As if grabbing ingredients wasn’t challenging enough already, in some levels of Overcooked 2‘s latest expansion Campfire Cook Off, players have to carry backpacks that contain ingredients. Unless someone’s wearing one, you can’t get that sausage you need for that breakfast platter order. So now, on top of everything else, you have to chase down your fellow chefs to get whatever ingredients you need, making the simple act of grabbing ingredients require coordination and cooperation. It’s clever, and downright fiendish.

Such is the newest wrinkle added to the delightful mayhem of Overcooked in its latest expansion. In Campfire Cook Off, the Onion King has taken to the woods as he continues to try and get back in the good graces of the kingdom following the whole Unbread incident from the main game. His latest idea? Earning merit badges. So it’s off to the forest to cook some proper campfire meals like s’mores, eggs, canned beans, and… pancakes. (Look, you’re a bunch of chefs — if anyone can make pancakes in the woods, it’s you lot.) 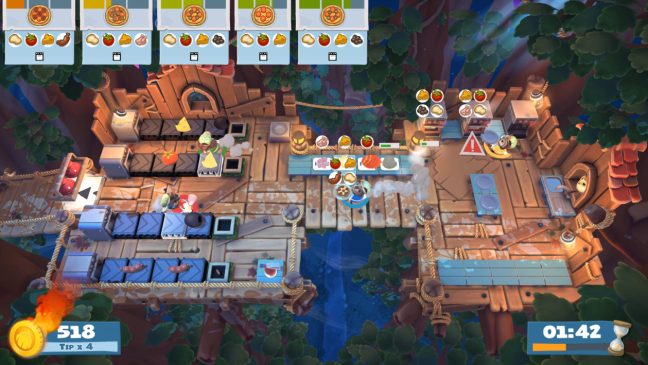 Almost from the word go, the game dives right into the thick of it. The second level proved to be first major obstacle me and my fellow chefs faced. While the level itself wasn’t doing anything too wild — no moving platforms, pitfalls, or cooking stations/ingredient dispensaries swapping places — the lack of space meant we couldn’t stockpile prepared ingredients to expedite things. Plus we had to constantly grab firewood to throw on the fires (which had to be chopped using the cutting boards first) so we could cook in addition to making regular dish-washing runs. Even with four of us, that was a lot for us to keep track of. And of course that was only a taste of what was to come. All the usual aforementioned staples have made their appearance, with a special shout out to one optional level that has you moving between four rooms exclusively through portals being particularly mean, providing their usual dose of fun and despair as we tried to adapt to whatever challenges were thrown at us.

Campfire Cook Off feels a lot bigger than the last couple of add-ons. That’s mostly due to the map being generally bigger, but also because of the increased number of extra levels to unlock. While Overcooked 2‘s DLC is clearly meant for people who’ve cleared the main game, the difficulty does feels a bit too much sometimes. Having to replay levels to get three-star rankings to keep progressing works in the main game because the required number of stars for each level went up a steady pace. In all of the DLC so far, it doesn’t take long to hit that point where you have to re-play levels to keep moving forward. That’s mostly a consequence of the lower number of levels, granted, but it is a bit annoying how quickly it occurs. Though if I’m being honest, I’m mostly just tired of being one point short of earning the next star I need.

Campfire Cook Off is only the first part of the game’s season pass, which promises to deliver more DLC throughout the year. Given how the team at Ghost Town Games have been able to consistently up the ante with each new update, whether they be free or paid, I both dread and greatly anticipate what else they’ll have in store for the coming expansions.