Outside of Commandos, I can probably say that the other most played PC game I played as a kid has got to be the Desperados: Wanted Dead or Alive, which in and of itself took inspiration from Commandos: Behind Enemy Lines, so in many ways, it felt like a natural path to take once I was done with the latter. Years later, the sequel to Desperados titled Cooper’s Revenge turned out to be a really weak game, and thanks to the flop it turned out to be, Desperados has been pretty much dead.

Until now. Developer Mimimi, the same group of wonderful folks who released the incredible Shadow Tactics: Blades of the Shogun a few years ago, have picked up the mantle and are now almost done developing the third entry to Desperados. And I got to check it out last week at E3. By all accounts, it’s looking fantastic and the sequel that the original deserved. The hands-on demo was guided by Mimimi’s founder and creative director Dominik Abé, and it saw a double dose of series’ protagonist Cooper gameplay: both as a boy, which worked as tutorials, and as an adult, through the actual story that takes place before the events of Wanted Dead or Alive.

During the child stages, Cooper was with his dad, as they both attempted to stealth through a few sections as they fled from bandits and all sorts of bad guys. Gameplay-wise, Desperados III plays and feels like Shadow Tactics, which already played a lot like the old Commandos and Desperados, so if you’re at all familiar with those, you’ll feel right at home. In case you are not, it plays from an isometric perspective, and you guide each one of your party members individually.

The big draw this time, pun intended, is the ability to synchronize moves and have more than one character act together in order to perform a number of actions. Say, having more than one enemy to take out, you can have Cooper and another returning character, Doc McCoy, each shoot a specific bad guy. It’s a really useful mechanic considering that the game feels like it’ll be as difficult as all of the ones I already mentioned, which is great news, because I love save scumming my way through them, trying to get a perfect run. 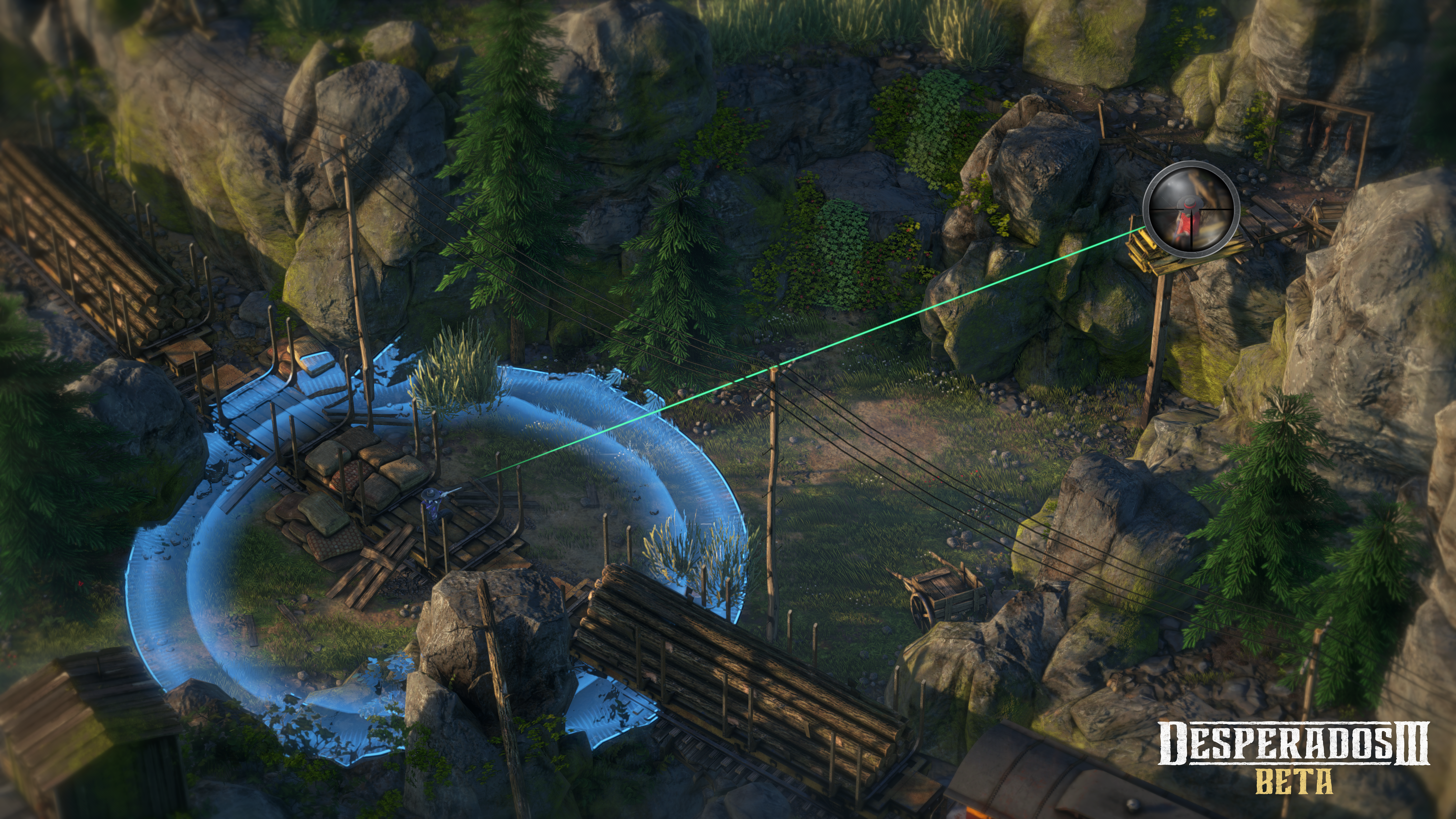 In terms of abilities, Cooper could make use of his trusty pistols and shoot up to two people at once, as well as tossing his knife, for silent kills. McCoy also has a gun of his own, which had slightly longer range, but his big trick is luring and eliminating enemies by tossing his medical bag somewhere into their line of sight. They both complemented each other quite well, and according to Abé, levels will vary your team composition a lot, so learning how to play off each team member’s skills off of one another will prove invaluable in the final version.

The demo ran for around half an hour, and after getting acquainted with the controls and my characters’ abilities, things flowed quite well. The situation grew a little hairy towards the end of my run, so I handled Dominik the controller (the game can also be played on keyboard and mouse) so he could show me another section of the game that featured brand-new gameplay with Kate O’Hara, yet another returning character from the original, who can lure enemies away from their posts with her charms, and get disguises, much like Aiko in Shadow Tactics and the Spy from Commandos, tricking people into letting her infiltrate otherwise impossible locations for the rest of the team. Her level took place in the game’s version of New Orleans, with plenty of opportunities for Kate to disguise herself as a lady of the night and literally take out horny guards.

Now is a good opportunity to touch upon just how big the maps were in this demo. Dominik zoomed out to show it off during the demo, and man, that last section looked to be as large if not even more than anything I saw during Shadow Tactics. And like his previous game, he mentioned that there will be lots of side objectives to partake in, such as the named enemies you can eliminate along the way, one of that game’s most time-consuming activities that had you scour every level in search of special enemy units.

Safe to say I came out of this appointment quite impressed with what I saw. I had huge expectations for Desperados III ever since I got word about it being in development, and I was more than happy with the slice of gameplay that I got to check out.

Desperados III’s scheduled for release sometime before the end of 2019 for Xbox One, PlayStation 4, and PC.