For the latest few iterations, I’ve hardly been a stranger to Monster Hunter. Monster Hunter World in particular proved to be one of my favorite games of 2018, and if the demo of its official expansion is any indication, it looks like it just might be on my top games list again this year. Iceborne is the first time ever that a Monster Hunter game has gotten an expansion, and in all regards, it made for an incredible hunt at E3 last week, proof that a successful formula has room for change.

Monster World World: Iceborne, as the name suggests, took us to a new frozen land called Hoarfrost Reach, where two new additions to the monster hunting book were waiting for us: Banbaro, a huge horned hulk of a brute who wanted nothing more than skewer my hunting party, and Trigrex, a fan-favorite who’s even more aggressive than the main game’s bleeder menace Dangaron. My four-player hunting party took Banbaro on first, and for that hunt in particular, I chose the Charge Axe. 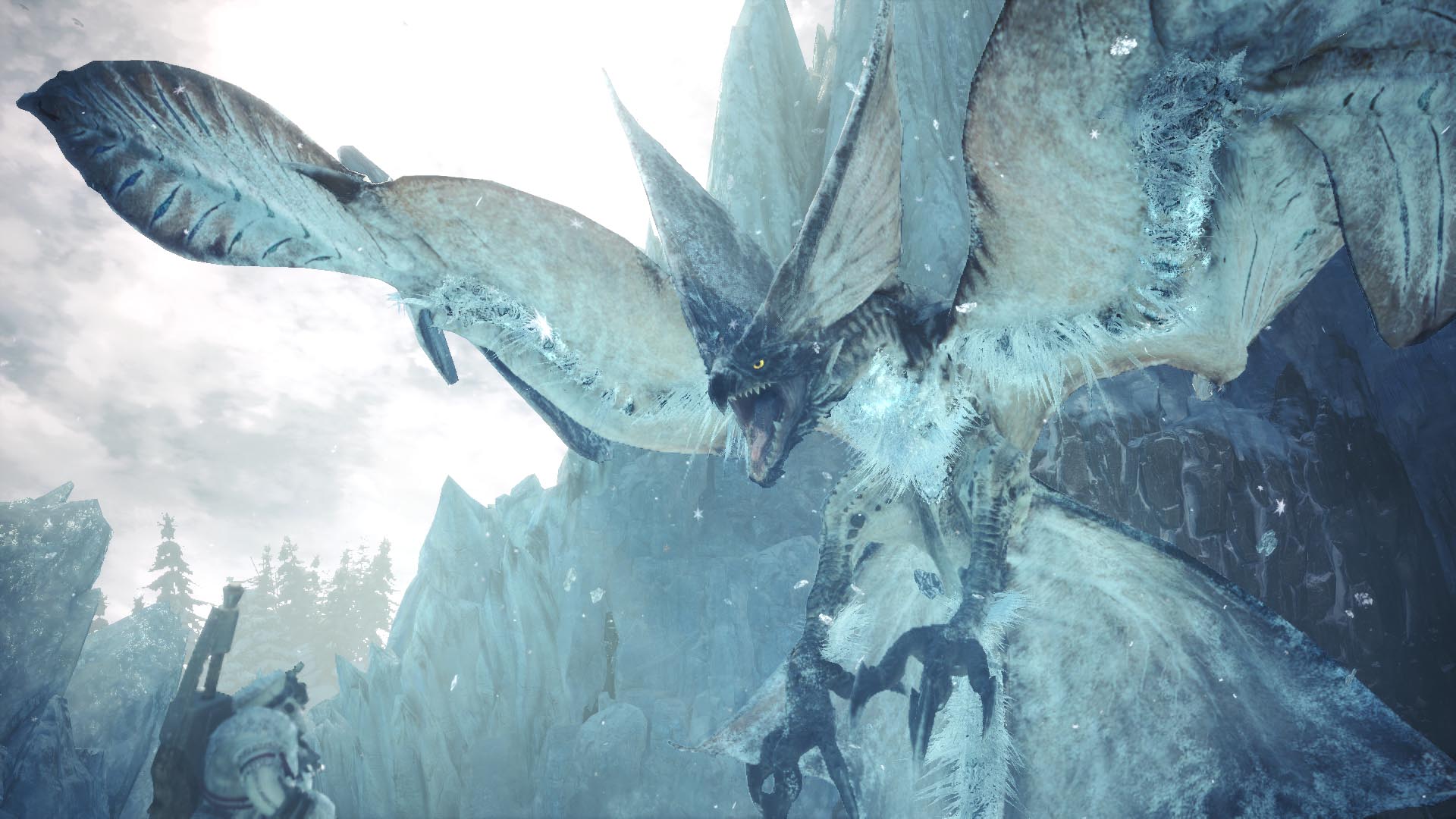 I’m pretty familiar with that weapon, which made me feel a little more confident going in considering it’s been months since the last time I jumped into Monster Hunter, so I relied on pure muscle memory in order to make it through this demo alive. In terms of setup, I had plenty of good gear to rely on, thanks to the beefy hunter the demo had me control — he wore some of the new winter gear crafted from parts of one of the new monsters which helped protect us from the extreme cold temperature. In fact, not only are there new gear to craft, but every weapon has gotten at least a new move to use, including the Charge Axe, which got a pretty powerful rotating chop that’s activated when you have at least two vials and attack in axe form.

As soon as we landed, the hunt began as one usually does in Monster Hunter World: by surveying our surroundings and looking for tracks, which we did and pretty quickly ran into our target, who’s on the mid-tier in terms of size, so it felt like a manageable fight. Quickly did we learn that that was barely the case, thanks to the incredibly thick hide that Banbaro hides behind. It took us a lot of effort to get the best of him, and thanks to his sweeps and charges, we almost got wiped out a couple of times, but thanks to the demo’s generous maximum amount of deaths before a failure state, we were able to make it through. The fight itself proved to be one of the most fun moments of this year’s E3, thanks to the sheer tension of not wanting to make a fool of myself to other players who were all around me at Capcom’s booth. We had a blast fighting this thing, so we moved on to Tigrex with relative confidence. 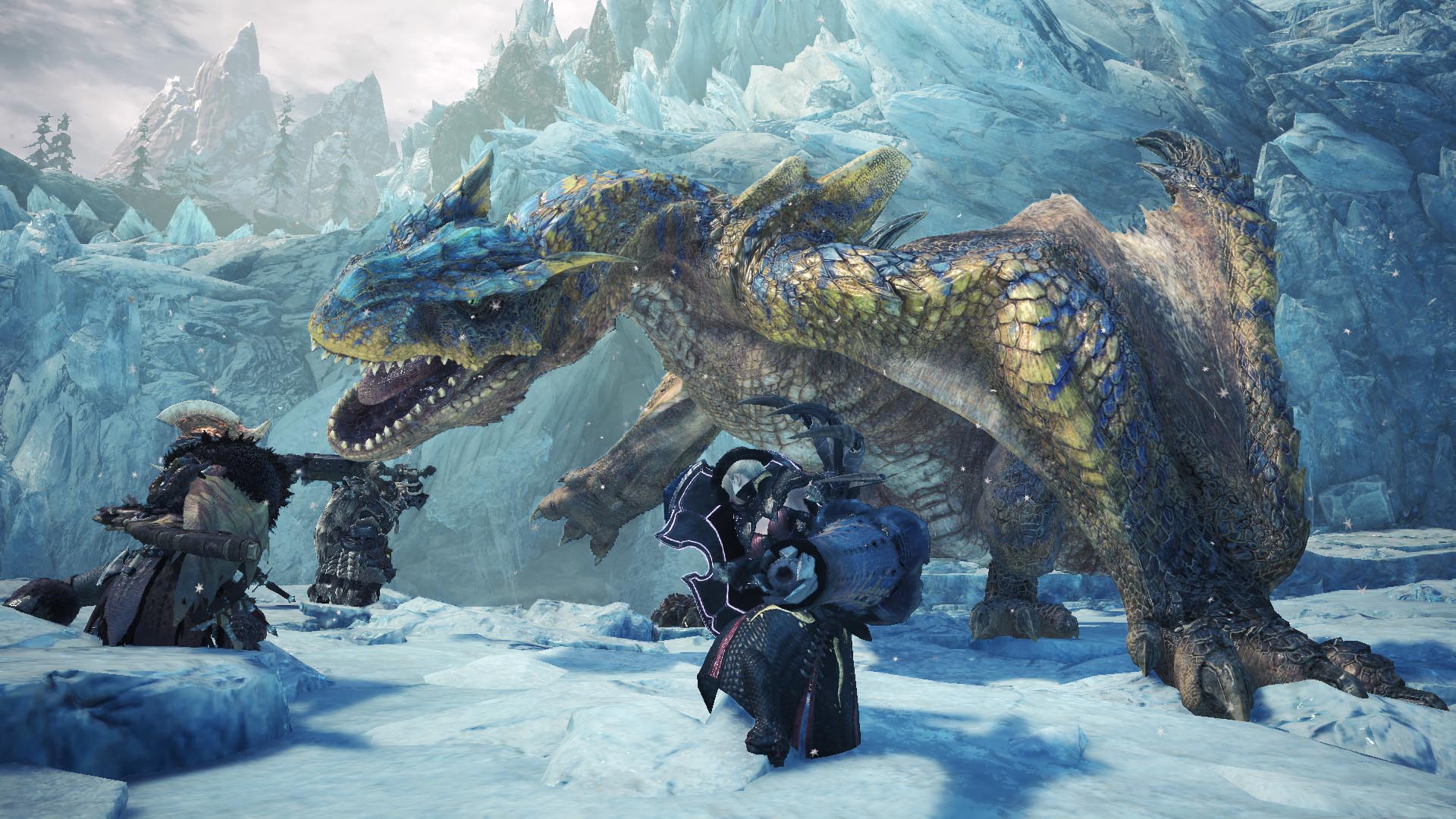 Little did we know that things would get way hairier from that point on, mostly because our demo time was nearly up, so we had to move quickly. I changed my gear to the Light Bow Gun, since Tigrex is a way more mobile monster than our previous prey. This allowed me to keep moving at all times, and thanks to the new evade reload, I could load up new rounds on the go. Sadly, even with all our might, we were not able to get this thing down on time. It proved to be a real beast of a monster, and living up to its name, Tigrex mauled us pretty bad, so much so that we spent half of our allotted deaths just trying to take it down. The gist of the fight was that we couldn’t just dodge attacks once, and thanks to its relentless attack pattern, Tigrex kept on the offensive even after missing an attack, which caught some of us unprepared.

One piece of new equipment that came in handy during this particular fight was the Clutch Claw, a type of sling upgrade that allowed me to grapple onto the monster from a distance. As for Banbaro, the other new trinket added to Iceborn has very useful: it’s called the Flinch Shot, which unloads a bunch of flash pods onto the monster’s face, making it hit walls and obstacles, leaving it open to attacks. These gizmos sure helped us get the upper hand in more than one moment during these encounters, and I’m sure they’ll get plenty of use during the final version of the expansion.

It goes without saying, but that final fight was even tenser than the one before. I was on my toes for the entirety of the bout, and I tried my best not to let my team down. That’s the very best part of Monster Hunter as a whole, and in that regard, Iceborne is shaping up to be incredible. I have already spent hundreds of hours playing Monster Hunter World on both PlayStation 4 and PC, and all signs point to me sinking in even more time trying to conquer the frozen wastes of this expansion. Like the original content, the little that we saw of the expansion proved to be absolutely beautiful, and the weather effects were pretty darn cool: as we trudged across the snow, our hunters got covered in the stuff, and it melted as we moved and rolled around fighting. It’s a small but very immersive touch for sure.

Monster Hunter World: Iceborne will be having an open beta on consoles this coming weekend, so if you’re interested in having a small taste of what the expansion is going to offer, be sure to download the client. You don’t need the base game installed in order to play the beta.

Capcom has announced that the Iceborne expansion will be officially out on September 6th. The PC version of Monster Hunter World will see it sometime later this winter, and in both cases you’ll need the base content in order to play — it’s an expansion, after all. After finishing the main story, you’ll have to reach Hunter Level 16 before accessing the Iceborne content. Goes without saying I’m chomping at the bit to get started.