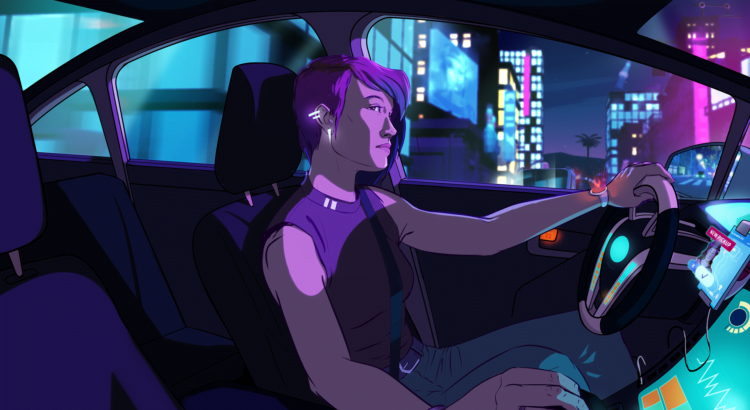 The first couple nights in Los Ojos went pretty well. Every passenger I picked up were pleasant, interesting people — and generous with the five-star ratings. Given how strapped for cash I am, it’s relieving to know I didn’t have to worry too much about how I was going to stay afloat so far.

Then that cop stopped me. That fucking cop. Gives me a ticket for having stopped in an area designated for Capra vehicles (which, in fairness, I did — at the request of a passenger). Gave me a fine which ended up taking a huge cut of my earnings, taking me from doing pretty okay to suddenly having to be extremely careful with my money. Then he has the nerve to pay extra on the side as some sort of “community contribution” or whatever, to which I say no because fuck that.

The next day doesn’t start off great. First couple rides end up giving me poor ratings, which put me at risk of being deactivated. I’m able to salvage it mostly by the day’s end, but still a little ways off from being in the clear. If as the meager amount of cash I had wasn’t enough of a problem already…

Such is the life of a rideshare driver in Neo Cab. Set in the fictional city of Los Ojos, Neo Cab follows Lina, a driver for the titular rideshare company who’s moved to Los Ojos to move in with an old friend named Savy. The two of them haven’t been in touch for a long time, Lina hoping this to be a chance to start over and reconnect. Soon enough, however, things immediately go off the rails. Savy’s gone missing, her now destroyed phone all that’s left, leaving Lina with few leads and nowhere to stay and no one to go to. As such, you have to keep doing your job and try to do it well enough to stay afloat while trying to perform your investigation all the while.

At the start of each night you’re given a selection of passengers (referred to in-game as “pax” — a phrase actual rideshare drivers use) to pick up. You can only pick up a few at most each night, meaning you have to consider which ones you want to help, which stories you want to see. To ensure you get a good rating, you need to essentially play to the passenger’s interests and try not to get on their bad side. That means having to balance your responses with what you want to say without saying something that might not endear you to your client. It’s not terribly difficult to pull off (or at least it wasn’t with the folks I picked up), but it is something that influences your choice of who to stick with. After all, easier to stick with pax you know you’ll probably get a good rating from than someone new who you might not have that guarantee with.

Everyone you meet has their own story arc — some of them being more closely entwined with the core plot than others. A lot of the passengers are fellow gig workers, while others are just everyday people going about their own problems — whether it be relationships, the world at large, or what have you. Allie, for instance, one of many gig workers for Capra (the monopolistic mega-corp that more or less controls the city of Los Ojos), is more or less a walking data collection machine, her suit equipped with all sorts of gizmos to track and observe all sorts of things about her surroundings while she conducts surveys on most anyone she meets. Or Liam, a photographer visiting Los Ojos on vacation in an attempt to make it as a photographer. Or Fiona, who’s grappling with how technology influences her and her partner’s lives, such as suggesting what the best activity would be to increase the chances of a successful date. Everyone has someone of note to say, their stories fascinating to watch unfold, thanks in no small part to the excellent writing on display. It’s sort of similar to Where the Water Tastes Like Wine in that way. That you can only see so many of these stories per playthrough makes Neo Cab worth re-playing, if only to see how all these individual narratives play out.

How these stories play out depends on what you say, but what you can say largely depends on Lina’s emotional state. Being a cab driver is tiring work — not just from the stresses of getting by, but from listening to people open up about themselves and their troubles. Depending on how conversations go, Lina’s current mental state can change. This is reflected via the Feelgrid: a sort of wearable tech that reads one’s emotions and translates them into a corresponding color. Red can mean anger or anxiety, blue depressed or lethargic, green calm or chill, and yellow being cheerful or hyper. The intensity of these feelings are denoted by how far into each quadrant the marker on the grid is. The more intense an emotion, the harder it is to change gears. If Lina’s feeling intense anger, for instance, it’s not likely you’ll be able to use any of the more level-headed options. Likewise, if she’s too depressed, she won’t have the energy to push back on something.

It’s a cool system. Locking off dialog options isn’t anything new for visual novels/interactive fiction, but the ways it can influence a ride, whether by forcing you to choose certain dialog because of Lina’s current state, or because the passenger sees what color her bracelet is and reacts accordingly, adds an air of unpredictability to the proceedings. It keeps you from being able to just game the system, essentially, as Lina can more or less override your choices sometimes, which creates some interesting situations where you have to reconcile what you’d ideally like to say or do with what Lina’s current state will allow you to do. For instance: relatively early on in the game, you come across a mob attacking one of the many self-driving Capra vehicles. Amid the chaos, someone jumps into the car and asks for help getting out of there. At first, all you can do is select the more angry dialog because, I mean — someone just jumped in her car unprompted. Even if you’re sympathetic to their plight, you can’t offer them help until Lina is able to calm down and recenter herself. It provides an interesting tension sometimes between what the player wants to do what Lina is able to do in any given moment.

As a game about the gig economy, automation, and the role of technology in our lives, Neo Cab isn’t shy about expressing its thoughts on the matter. Most of its commentary comes from the stories each passenger brings, the main plot focused more on the mystery surrounding the disappearance of Lina’s friend. One recurring plot point is a piece of legislation called “Sophie’s Law.” The gist is that it’s a bill that would ban all non-automated vehicles from Los Ojos following an incident where a human-operated car ran over and killed multiple people. Opinions on the matter are split — obviously drivers like Lina are against it on the grounds of it destroying their livelihood (if passed, it’s not hard to see it setting a precedent for similar laws to pass elsewhere), while others oppose it on grounds of giving corporations too much power (Capra would basically control all transit in the city) and not addressing the core problem, while its supporters want it due to believing that self-driving cars are simply safer.

The game holds some very clear and critical views regarding automation — particularly around what it’ll mean for the workers it will inevitably be displaced. While automation definitely has the potential to make our lives easier, ideally making it so we don’t have to work as much, the ways its wielded and implemented under a capitalist system makes it something to be feared. It’s no secret that Uber and Lyft want to ultimately make the swap to automated cars to increase their bottom line. Amazon has already been making moves to automate Whole Foods, and has even opened its own line of stores that are fully automated. In a world that requires us to work full-time eight-hour jobs (at minimum if you’re lucky) to survive, suddenly losing that income to a machine is a frightening prospect. The job market will take care of us, people like to say (one pax more or less says as much even), but that’s placing too much trust in a system that demonstrably doesn’t care about people. Neo Cab is skeptical then, and justifiably so.

Neo Cab has a lot to say. It’s hard not to leave it pondering the topics it raises, or at least empathize with the stories of the people you meet. For as much as Neo Cab‘s commentary is good and resonant, it’s just chatting with people and hearing about themselves and their lives that makes the game worthwhile. The time you spend with the people of Los Ojos is limited, the chances of seeing the same person twice relatively low, but just as in life, those brief encounters stay with you.