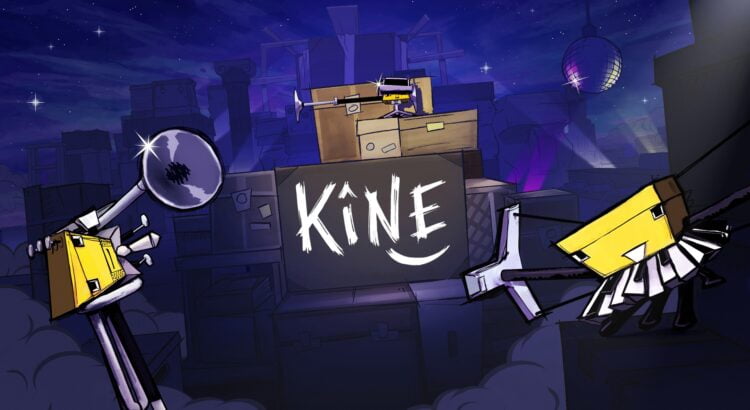 Puzzle games can often be hit-or-miss for me. Not because the games themselves are bad, but because I don’t always have the patience for them past a certain point. There’s only so long I can keep solving puzzles before I get burnt out if there’s nothing driving me past pure completion, especially if the core mechanics top out relatively quickly. Which is why Kine, with its fun, heartwarming story, was able to hold my attention the whole way through. An excellent puzzle game on its own is always welcome, but one with a good story on top of it as well? Sign me up!

Kine follows a burgeoning jazz band and their path to stardom. It begins with Roo, a pianist who’s looking to pick up a new instrument, which she finds in the accordion. Soon after she’s joined by Quat, a drummer who’s a bit full of himself who happens to be looking to put a band together. They’re eventually joined by Euler, a very quiet and shy trombone player. Each of the game’s stages follow the crew’s exploits, ranging from practicing their respective instruments, doing a bit of free-styling, enduring the drudgery of a soul-crushing day job, and more. It’s a story of friendship and doing what you love.

The game itself sees you rolling each character around to reach the end of each level. The introductory level is deceptively simple in that you’re very easily rolling forward one step at a time, moving the camera as needed to see where you’re going. But as the band is represented as the instruments they play, navigating each stage soon becomes a lot more challenging. Quat, being a set of drums, has to work around the pipe connecting a couple of  hi-tops that are attached to him. As such, he can’t just roll around like a regular ol’ six-sided cube. He has to make sure there’s enough room to accommodate the rest of his drum set. A tight corridor would require you to situation him just so that the pipe extends outward so he can roll through the corridor. Likewise, Roo, with her accordion, can only roll on her sides easily when the squeezebox is fully extended. If it’s retracted, the sides of the instrument jolt out and restrict her to only to rolling on her face and back.

Internalizing how to move with each character takes time, a lot of the early difficulty a result of learning how to navigate each level with them. The introductory level for each one helps a ton in getting the basics down, however, which makes it all the more satisfying when the game starts to toss new wrinkles into the mix. For instance, using Roo to help transport Euler to another spot (or vice versa). Or putting each character on platforms that slide across the floor. Every new set of puzzles introduces a new idea and explores it to its fullest before moving onto the next one, ensuring Kine doesn’t fall into tedium.

The ways Kine weaves its story into each puzzle is delightful. Every set of levels is themed around what the band is doing at the time. A brief stint at Roo and Quat’s day job has them doing monotonous work, which is represented by small, quick levels that change only slightly from one to the next. Practice sessions between the two of them alternate how much you need to use Roo or Quat to complete each stage. In the first one, for instance, Quat takes charge and ends with a drum solo, requiring you to only move him around to finish the level. Whereas when Roo takes charge in a freestyle session, she’s doing more work to help Quat move, leaving him a bit lost as he doesn’t know how quite to contribute without a plan, ending with Roo doing a solo despite her invitation for Quat to join her.

Puzzles games like this don’t usually have much in the way of narrative, or if they do, it feels disconnected. Self-contained puzzles are usually just that: self-contained, focused purely on play more than story. Something like Linelight, for example. Kine never felt that way. If anything, the story being so tightly woven into each level made Kine that much more enjoyable. Easier to stick with games like this when I’ve got something to be invested in, especially once the game starts getting tougher. As much fun as the game is, I was just as excited to see the next bit of story as I was the next puzzle.

That said, while the puzzles mostly strike a good balance on the challenge side of things, there are definitely times where a hint system would have really come in handy. There were definitely a few stages that left me utterly stumped. Most of the time that was merely due to me forgetting some of the basics of how each character can interact with one another, but occasionally I legitimately felt stuck with no clear path forward. In those cases, I eventually solved the level purely by random without completely understanding what I did. Something to point me in the right direction would have been helpful.

But even when I felt hopelessly stuck, I kept trying stuff because I was invested in the characters. Putting up with a few puzzles that drove me up the wall is worth it when there’s a fun story to follow along with. Kine is just a pleasant game, on the whole. One well worth your time.