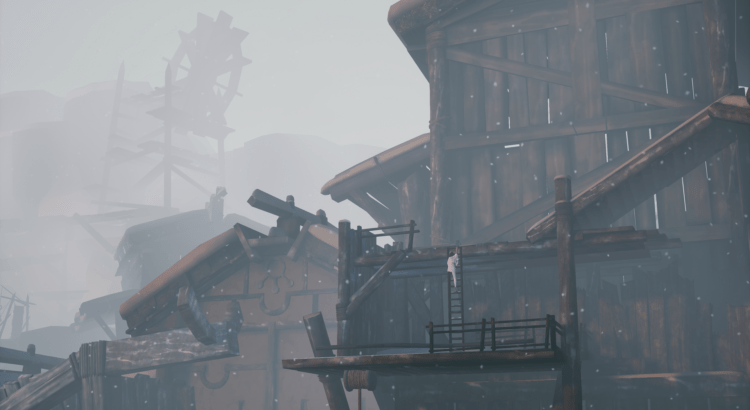 Stela is one of those games where, for every bit of praise, there’s a “but…” to follow. It’s a solid platformer with some really striking scenes, but nothing to really tie them all together into a cohesive narrative. Its world provokes plenty of questions about its nature, but the story is vague to the point of never giving you anything to latch onto. It’s a very pretty, solid game on the whole, but it feels like it lacks that one final piece to really bring it together.

Stela follows a woman on her trek through a mysterious, hostile world. It begins with her waking up deep in the middle of a cavern with seemingly no clue how she got there. The exact events of the story are purposely left vague. You run through a variety of locales, such as a quiet countryside village, a desolate forest, a city under siege, a massive underground complex, and more, never really knowing what exactly is going on or what brought the world into its current state. It certainly invites plenty of questions, but it also feels too obfuscated to draw any conclusions. I went through the whole game wondering where the story was going, whether it would provide any sort of hook that might point to what it’s ultimately about. By the end, I still didn’t feel like I could say exactly what happened.

It’s very pretty, though. The world is striking, every area exhibiting a simple, elegant beauty that compliments their haunting nature nicely. The eerie stillness of an abandoned village, the tension of trying to outrun a creature burrowing through the snow, quickly closing in on you: Stela knows how to make a scene evocative. The game takes clear inspiration from Playdead’s style of platfomer (Limbo, Inside). It’s very atmospheric like those are, constantly having you move on a two-dimensional plane, taking in the world as you go, solving some light puzzles along the way.

Unlike Playdead’s work, however, Stela avoids most of the pitfalls that, say, Limbo fell into. Where that game’s puzzles and obstacles required you to die at least once to them before you could do anything about them, Stela takes care to ensure you have all the info you need to solve whatever problem lies in front of you and enough time to react to any sudden death traps. Rarely ever does it force you into a situation where you aren’t immediately given all the information you need to progress, the game quick to establish what you can and can’t interact with in a way that feels natural. It ensures you’re never really at a loss of what to do, which in turn keeps the pacing nice and even. At worst, there’s a couple moments where you might not immediately make the right moves in the middle of a big setpiece and end up dying, thus killing the pacing of that particular event, which is only a minor issue, really.

Stela‘s biggest issue is that it all feels… disconnected. Beautiful scenery and solid platforming are all well and good, but it lacks any sort of cohesion. Every area feels largely disconnected from the last, making it difficult to tell what the space is meant to convey, puzzles and obstacles similarly lacking in context. A lot of them are understandable — pushing blocks and other objects around to help you avoid detection or simply get around are clear in their purpose — but others feel like they’re there just because. Deathtraps like spiked ceilings or walls that attempt to crush you feel out of place when the space doesn’t really feel like a place that would be filled with such contraptions. It feels like something that was added because that’s what games do rather than because it serves the fiction.

It’s disappointing because, generally, it all works. Moving around is simple but feels good and responsive. The world has some striking sights and manages to elicit a strong sense of mystery that made me want to know more in spite of its obtuse plot. Individually, everything’s there. It’s a perfectly serviceable game in that sense. Stela‘s just missing the final piece to bring it all together; the final piece to turn it from a merely fine and serviceable game into a great one.