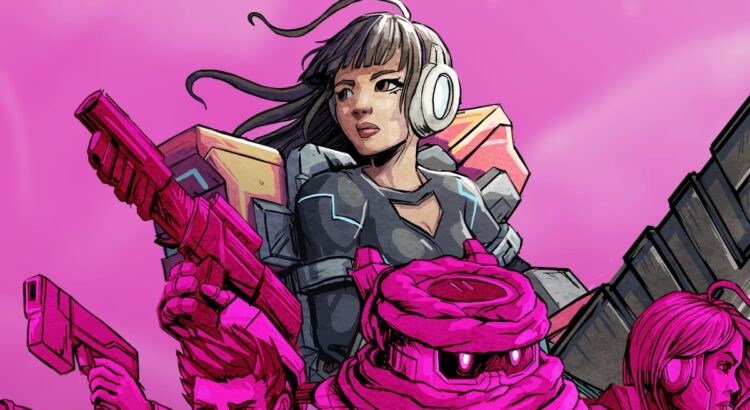 I can usually tell right away when I’m about to tank a run in a roguelike. I get overconfident and end up biting more than I can chew. That’s not the case with Star Renegades, Raw Fury’s newest release developed by the same folks behind the excellent Halcyon 6: Starbase Commander, Massive Damage Games. I could be rocking an all-star decked out group of high level renegades and still bite it at the drop of a hat.

That’s because the game is built around the concept of you failing. As part of a group of interplanetary guerrilla fighters, you jump from one reality to another in the hope of thwarting an evil empire’s conquest of the universe. You’re bound to fail repeatedly, but with each loss you gain more powers, allies, and most importantly, valuable intel on the enemy.

Star Renegades shines because it’s extremely easy to get back in and give it another go whenever you lose, and every defeat opens up even more possibilities for you to have a chance at winning. It’s a turn-based RPG in the vein of the Grandia games, where turns are dictated by a timeline of sorts that rests atop the game screen, allowing you to see what’s coming at any time. Some attack types can break your opponent’s casting and throw them to the back of the line, so if you’re good about timing you can prevent them from taking their turn for quite a while.

Maps are small and quick to get though, and the game keeps you going by only giving you so many possible paths to take by limiting the amount of charges your robot friend can use to open up new ones before you have to quit for the day. And at the end of three days, regardless if you’re prepared or not, you have to face the behemoth, the Imperium’s strongest unit sent in to check-mate the opposition.

If you end up losing that fight, or any fight during your run for that matter, you’re transported to another reality and back to the start of the invasion for another go at trying to stop it. It’s that simple of a concept; it works brilliantly without a whole lot of plot getting in your way.

Oh, and did I mention that all of the named enemy units that you left alive get promoted after you die like the Nemesis system in the Shadow of Mordor games? Because they totally do and boy are they bad at trash talking when you face them again. Really bad. It makes it that much more rewarding to finally take down, but then again there’s always the chance for them to be brought back to life.

There’s a lot of depth to the combat mechanics in this game, like whether or not some moves can actually damage an enemy if they have a high enough armor stat to absorb the hit, not to mention shields and having to maintain them with support skills. Then there’s the whole matter if your enemies are even positioned in a way where you can take aim. Enemies are especially tricky when it comes to that as they don’t pull any punches taking advantage of their placement, with plenty of cannon fodder in the way of the actual danger you’ll want to take out right away.

All recruitable party members are a lot of fun to play with too. It helps that each has their own set of unique abilities that makes putting together a team really strategic due to the amount of permutations you can come up with different combos. That’s not even mentioning the relationships you can develop between team members during the off times that they spend in camp by using passive and active skill cards.

The further you get in making a character like another the more benefits you get in the form of perks like +5 to shields or attack, not to mention the cute exchanges they have with one another. That makes unlocking them that more special and worthwhile. Initially, your team can only have three characters at once, but every time you clear each of the three worlds you have to get through before facing the end boss, you’re given an extra slot, so if you manage to make it the end of the game you’ll have six renegades at your disposal.

This being a roguelite game, you can expect to see a lot of the same content over and over again as you fail and are forced to restart, but Star Renegades makes starting again less of a grind by having you unlock more intel with each failed run. Intel in turn makes it so characters can be specced into classes that make them even more unique to play, such as your starting damage dealer becoming more of a tank character with a larger health pool. It’s a cool way to feel like there’s some progression going on even though you’re having to restart.

You could toss a pebble at any of the digital storefronts and nail a couple of great looking retro-styled pixelated games, but Star Renegades might just be the most impressive of the bunch so far this year. The isometric viewpoint of the game benefits the art style by having the 2D art layered in a way that gives a sense of weight to the world and characters like anything I’ve seen before.

I was more indifferent than anything about Raw Fury’s previous release, West of Dead, but I can without a doubt say that I’m anything but that about Star Renegades. Its solution for making a roguelite more playable and adding depth to the inherent repetition is one I’ve enjoyed most up till now. While I haven’t quite saved the universe yet, I know I’ll get there if I keep trying.