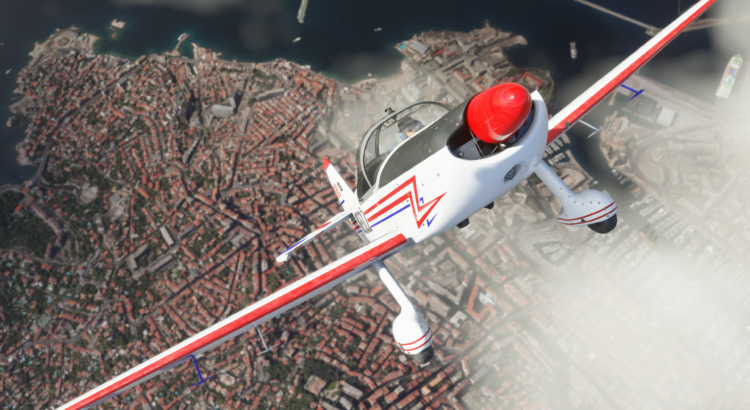 It would be unfair to call any of the Microsoft Flight Simulator entries merely a game. Spanning over thirty years, the series has been the pinnacle of well… simulating flight. I spent countless hours as a youngster playing some of its earlier entries, charting trips that would take me a long time to complete. Back then I toyed with the idea of being an aeronautical designer which ended up going away once I discovered I was no good at Mathematics when I reached high school. But I never stopped loving the feeling of the freedom that flying virtually could provide.

The announcement of the new Flight Simulator was somewhat of a surprise back at E3 last year considering that the franchise has been dormant for quite a while, but the biggest shock was that out of all developers, Asobo Studio out of France would be the one doing it. Their previous game, A Plague Tale: Innocence, was one of my favorite games of 2019, and I would never have imagined such a shift for them, now tackling such a different genre.

And man did they nail it! Except for not featuring helicopters, which were some of my favorite contraptions to fly in the 1998 iteration of the series, the latest version is an amazing feat in just about every department. Yeah, it can be a little difficult getting it to run for the first time due to the archaic way downloading it works — it’s done via the game itself after downloading an initial file, and it’s prone to failures that might force you to restart the process from scratch — but outside of that slight hurdle, I couldn’t be happier with how the new Flight Simulator turned out.

It all starts with an incredibly in-depth tutorial that works wonderfully to ease you onto the pilot’s seat by having you do everything related to flying a plane alongside an incredibly chatty instructor who sees you learning practically all you need to safely get off and onto the ground in one piece. Trust me, even if you have some experience with these games, you’ll want to play through these lessons. They manage to be both an incredibly thorough and enjoyable way of learning the ropes of this new version of the game.

Then there are a few other options to get you flying for real, on your own. The main one is basically an open charter for you to pick a starting airport and a destination, as well as a plane among the 30+ options available to you, ranging from the smaller Cessnas to big ass Boeings. You can set a multitude of variables for your flight. For instance, you can get real-time weather and timezone info and fly exactly as the location you’re planning to take off from is as you start, or basically set it just the way you want it. Ever dream of reenacting the drama of Die Hard 2? Go ahead and get that snow storm going in O’Hare!

Jokes aside, the main meat of this game is basically spending hours and hours trying to extend your stamina and get you to take longer periods of time in the air. On the other hand, if you’re in a hurry, you can cut your trip short by selecting which point of the flight you wanna take over in. Regardless of your situation, there’s something to do here, and they’re all worthwhile options to partake in, and whether you’re sitting in a plane for 20+ hours flying from Buenos Aires to Tokyo or merely flying from Orlando to Miami in half an hour, Flight Simulator is absolutely thrilling to play.

You can also tackle some of the special weekly challenges that give you more objectives-based missions for you to try and complete, such as landing a plane under less than ideal conditions, or in a certain amount of time. They’re cool scenarios for sure, and for those who might complain about Flight Simulator seeming a little too aimless for their taste, it’s a great way to get the adrenaline pumping.

There are many aspects of the game that factor into that. For one, it’s an absolutely gorgeous experience. Even though I’ve only been playing it on medium graphical options and it’s still beautiful. The sky is one of the most realistic I’ve seen in a game, with believable clouds and weather patterns that even reflect within the plane’s windshield. But it’s perhaps the ground detail that will really wow you here.

Flight Simulator makes use of satellite imaging to generate all of the world’s land masses to a shocking amount of detail and realism. Sure, here and there things might look a little wonky, especially in more sparse sections of the map with not a whole lot going on, but populated environments look really good, even more so if it’s a postcard location like, say, Rio de Janeiro. Looking to the outside from inside the cockpit or pulling the camera out to third person is extremely atmospheric for sure.

If you’re looking to make this game look its absolute best, though, you’re going to need a beast of a machine since it can be somewhat system intensive in its higher graphical settings. While I’m happy to play it on medium, I’m looking forward to seeing how all will look when I manage to get a new setup going here. And since Asobo is planning to keep Flight Simulator going for quite a while with recurring updates, I’ll probably get the chance to get back in with an even better looking flight experience while the game is still active.

In case you are a more serious player that owns special peripherals like pedals and flight sticks, you’re bound to have a really good time playing this, not only because it supports just about every USB option in the market, but thanks to how faithfully it models planes, everything that you do will reflect in game. On the other side of the spectrum, though, if you’re only using a gamepad, the game is still very playable, but you’re better off playing with a keyboard and a mouse at your side since there are so many shortcuts.

It can’t be overstated how well this game reflects the planes. The attention to detail is just ridiculous. Dashboards react realistically and you are incentivized to depend on them for readings when playing in first-person view. You can press and use just about every button that’s there, and on higher difficulty settings you’re definitely going to need to know what you’re doing since there’s no hand holding. Then again, even on easy you’ll be better off having the basic notions of flying that come from the tutorials too.

Regardless of how you choose to play, this game has the potential to be a mainstay in your collection if you dedicate yourself to it. As with real life piloting, the more hours you spend practicing, the more second nature it becomes, and as a result, the more rewarding. While I haven’t yet spent quite as much as I would want flying — not a kid with all the time in the world anymore! — this is definitely a download I’ll be keeping around for sure.

We’ve finally reached a point in graphical fidelity in games where a Flight Simulator can actually look the part and be practically photorealistic. But a game can’t hang its laurels merely on looks alone. Thankfully, the 2020 edition of Microsoft Flight Simulator is an incredible achievement that will be sure to keep giving you the more time and dedication you invest in it, making it a great pickup for anyone looking for a long term PC game to enjoy.