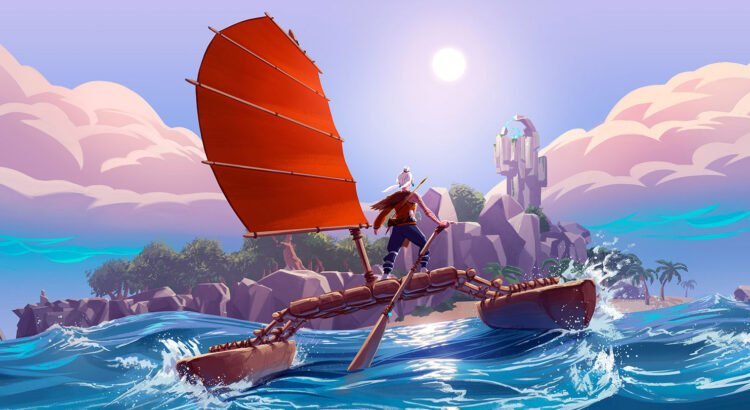 Windbound takes place across a vast archipelago of randomly generated islands. It’s broken up into a number of chapters, with each chapter introducing a couple of new gameplay changes, creatures and crafting recipes. Kara is originally shipwrecked, and while there is some story here it’s effectively a framing device to allow for the exploration of the islands. Between each chapter, Kara is transported to a kind of heavenly sea-realm where she must cross a stormy tumult in her boat to make it to the next area.

This is definitely a survival game, so you have to manage Kara’s hunger meter which runs down at a fairly swift rate. It can be replenished by eating berries, fish and a number of the different animals that roam across the islands. You can also build campfires and cook your food, to ensure Kara doesn’t get food poisoning.  Cooking food is a significant time investment, so ideally you want to have several meals ready to prepare at once. If you do succumb to either accident or injury, the different difficulty levels determine whether you start the game over (effectively permadeath), or start from the beginning of the current chapter.

Kara has a wide variety of things she can craft, from weapons to backpacks and ship upgrades, turning her original grass canoe into a mighty outrigger. These crafting systems are the backbone of the progression in the game, and therefore it’s disappointing that they’re pretty unsatisfying to engage with. While you can continually upgrade your boat to grander designs, the basic canoe and mast configuration is good enough to get you through the bulk of the game. Cooking is interesting, but because it takes so long to cook things, I loathed each time I felt it necessary to do it, hanging around the campfire waiting for the meat to brown. The same goes with the weaponry; a pointed stick is weaker than a flint-tipped spear or greater, but it can still damage and kill most enemies regardless. While it’s nice to deck yourself out in the finest gear possible, the incentives to do so are fairly minimal.

There is clear inspiration in some areas from The Legend of Zelda: Breath of the Wild in some areas, most notably the combat and weapon degradation. The combat is mostly a one-button affair, where you can dodge incoming attacks and then jab at enemies in retaliation. It feels reasonably responsive although some enemies are very nimble and will also dodge your attacks. The difference from BotW though is that Windbound has an extremely limited inventory whereas BotW’s was infinite, which makes weapon degradation much more of a pain as you are constantly having to craft new weapons to replace broken ones. You can upgrade your inventory size, but never to the extent where you’ll have plenty of space for everything. This means you’ll need to be juggling your inventory to manage your food resources, weapons and crafting materials for all your upgrades, a delicate balance which never really gets easier.

Windbound certainly isn’t without strengths; the visual designs of the islands and the creatures are all charming, and the water effects have a painterly vibe similar to The Legend of Zelda: The Wind Waker. Sailing is certainly enjoyable; you can control the pitch and height of your sails in order to gain speed and change direction, a very intuitive system which makes navigating across the ocean to whatever island you fancy one of the most entertaining parts of the game. In the quiet moments when you’re charting your little boat across a vast ocean beneath a starry sky, it can be pretty relaxing. Sadly then you notice that Kara will be hungry soon, and you need to focus on getting her next meal ready.

Windbound feels hamstrung primarily by its critical path, chapter-based format. Unlike a game like Subnautica, it artificially restricts your progression through chapters, rather than naturally gating your advancement through dangerous areas which require higher skills or better equipment. This means that once you’ve finished your initial exploration, you must repeat the same tasks of climbing the beacons and using your necklace to activate the warp portal, over and over. The story unfortunately isn’t strong enough to sustain this format, even though it was used successfully in titles such as Journey. Windbound is fine for a short pleasure cruise, but you’re unlikely to want to complete the full voyage.