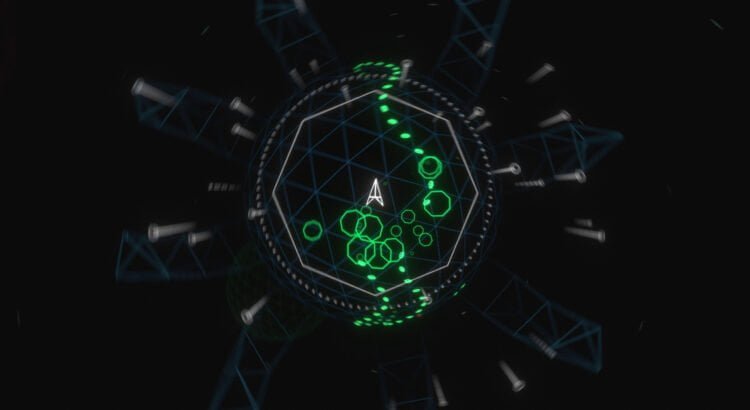 You ever play a game that constantly has you cursing yourself for decisions you made just moments ago? Especially for making those same decisions repeatedly? Specifically in the sense that you know what you’re doing wrong but keep doing it anyway. Recently, Terror Squid has been doing that to me.

Terror Squid is a top-down action game that sees you gliding across a globe leaving various kinds of bullets in your wake. As you do so, a meter charges that, when full, allows you to destroy everything in your immediate vicinity to clear the space for the next wave. The goal is to see how long you can survive for, with each consecutive stage (or “ritual”) introducing new kinds of bullets to contend with. It’s kind of like a bullet hell shooter that pits you against yourself, essentially. You’re not trying to memorize rote patterns but rather trying to recall and predict the way the bullets you’ve generated will move and curve around the globe.

It’s as hard as it sounds. The first couple of stages are easy enough to survive since the kinds of bullets you’re dealing with – a straight line of small red projectiles and a spread of five bullets that expand and contract as they move – aren’t much of a problem on their own when deployed carefully. I usually just build a large line in the first stage and keep growing it until I’m 20-30 seconds in during a run so I can destroy them all and start fresh with an almost half-filled meter for stage two.

Farthest I’ve gotten is the start of stage four, almost always meeting my demise quickly due to how chaotic the field becomes by that point. If I could just find a way to clear the field during stage two, I would probably fare much better in the long term. They’re hard the group together tightly enough to create any sort of chain-reaction. Best I can do usually is maybe hit a couple clusters, which isn’t nearly enough to be helpful given the kinds of obstacles I’m dealing with from the third stage onward.

Stage three introduces bullets that spawn in a circle and slowly expand outward. Each individual projectile isn’t much of a threat on its own since they’re small and not terribly fast, but considering how quickly they come to dominate the field, navigating the chaos can quickly become a problem. On the plus side, because they spread out so much, it’s pretty easy to use them for bigger explosions to clear the field.

Stage four is where things really get nasty, though. Here you’re spawning objects that permanently sit on the globe where they appear and fire a couple bullets off in opposite directions upon arrival. They only fire once, thankfully, but that the things they fire from remain in place until they’re destroyed definitely doesn’t help. You’d think stationary objects would be among the easier stuff to avoid, but not so much. Just means you now have to try and remember where those things will be amid everything else.

Trying to balance everything by that point is… difficult, to say the least. I’m no stranger to bullet hell scenarios, but Terror Squid definitely feels more demanding at times. It’s satisfying in the same ways other score-attack games like this are — the thrill of barely scraping by as the room you have to maneuver continues to shrink, somehow managing to stay alive amid the mayhem just long enough to get the brief relief you need before it starts all over again. It’s very much a good one of those.

So far, best I’ve been able to do is be like a second or so short of being able to clear that wave. The field always becomes so busy by then that I’m always just barely scraping by. Most my runs end long before I can reach that stage, my various attempts to try and deploy the bullets such that they converge on one another often backfiring in spectacular fashion (keep trying to send them out in various patterns to see if that helps, but no luck yet). Can only imagine how much harder it becomes after the fourth stage. With any luck, I’ll hopefully be able to see it myself eventually. Till then, gonna keep on trying to figure out how to survive the first few stages.