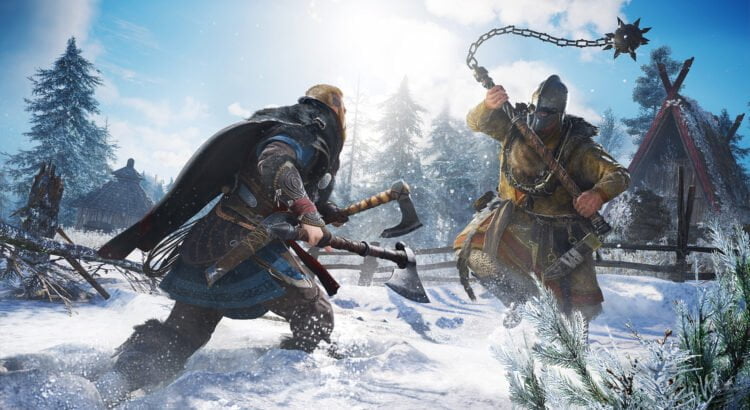 It’s kind of nuts how much Assassin’s Creed Valhalla feels both an old and new Assassin’s Creed game at the same time. It’s also insane to think just how far the series has come in such a relatively short span of time. It was only 13 years ago that the first entry came out for the Xbox 360 generation, but it feels like much more than that. Probably because since then there have been countless Assassin’s Creed games, so many that Ubisoft had to reboot the franchise a few years ago in the excellent Assassin’s Creed Origins.

Assassin’s Creed Valhalla is the third game to come out under this new flavor of Assassin’s Creed, and if you’re not tired already of reading “Assassin’s Creed” in this review, well, I’m sorry, it’s what we have to deal with here. If you’re anything like me, you’ve probably gotten your fill of the series’ convoluted modern day plot by the time the third game rolled around, and it’s to Ubisoft’s credit that they’ve played down that part of each new entry for a while now, only merely having you get out of the Animus for a few moments before going back to the good stuff.

Things are mostly the same in that regard in Valhalla. Following the events I didn’t get close at all to finishing in Assassin’s Creed Odyssey — seriously, that game did justice to its name in being absolutely too long and overblown — Assassin Layla is in the possession of a powerful ancient artifact and is just barely in control of its powers when she finds a lead that takes her to North America and the remnants of a buried viking corpse. That scrap of backstory gives us yet another excuse to jump around and stab people in old times, now as a viking in ancient Scandinavia and England in one of the best Assassin’s Creed games in a while.

I’ve been playing Assassin’s Creed Valhalla for almost 20 hours now, and like Odyssey, I’m nowhere near reaching its conclusion, but differently from that game, I can see where it’s leading me, and most importantly, I’m caring about the journey. It’s like when I played Origins and got to enjoy it so much. While Eivor is nowhere near as deep of a character as Bayek, getting to take them through their exploits as a viking from a plucky clan trying to make a foothold in a new territory, Valhalla has so far been an excellent time.

For as far as our run through ancient Egypt might have tried to stray as far as it could from the original entries in the franchise, it feels like the new game is steering back to the classic formula while keeping what made Assassin’s Creed Origins so amazing back in 2017. Ubisoft went as far as actively introducing members of the order into the story, so early into it that they soon become integral part of the gameplay too. And astoundingly so, they fit into the conceit of the game given vikings navigated all around the ancient world, so it makes sense that they would eventually end up in the Holy Land, or in Valhalla’s case, ancient Constantinople.

Now, you might have read some stories about the shaky situation that Ubisoft’s been this year in regards to the many, many accusations of mismanagement and sexual workplace abuse that upper management has gotten, and Assassin’s Creed Valhalla isn’t at all out of the fire given that its creative director Ashraf Ismail was fired a few months ago following reports of his extra-marital escapades with fans. It’s a shame that there’s so much negativity surrounding the game, and while knowing that its DNA is intrinsically tied to Origins, which was also directed by Ismail is certainly troubling, there’s a lot going for it as an entertainment product.

Same as the previous two entries in the franchise, Valhalla apes on modern open-world mechanics without any shame whatsoever, especially The Witcher 3: Wild Hunt. That game was pure awesomeness back when it was new, so no biggie on that, it’s good that the best aspects of Geralt’s adventure sneak into newer releases, like having a map with mysterious checkmarks you get to explore and discover, and to that extent, the new Assassin’s Creed is much more manageable than even Odyssey due to how contained it is when revealing new content when you’re out exploring. Climbing a synch point now no longer explodes the map into tiny little icons to bump into, but merely points you towards areas you might be interested in exploring, and the few blips that it does reveal are conveniently not simply blank question marks now, but color-coded.

Gold ones indicate actual treasures you can get, like new armor and resources for your home camp, while blue and white ones indicate sights to see or special world quests to partake outside of the main story. These are enough to draw you in and get lost in its world, but are thankfully not nearly as much of a handful as they were in the previous two games. The color change might feel minor, but it helps you decide whether or not it’s worth going for it, and even then, if you do run towards one, it serves up a rewarding time since it’s not as straightforward as you might think given the variety. For instance, you might be out for a gold one anly to find out it’s underground, but how do you get to it? Oh, a locked door, hm, where’s the key?

Eivor’s journey takes them — you can choose to play as a man, woman, or let the game decide which you are at any one time due to a story constraint of there being two DNA strands mixed into the same memory Animus line — to a vast number of beautiful lush locales over Scandinavia and ancient England which are a blast to pick into. Their story is as much of an Assassin’s Creed one that you’d expect, but it’s not nearly a backdrop as it would be in a purely “dick around” open-world game.

Progress carries a narrative link that helps flesh Eivor’s character and at the same time play around with history, or as much as there is of it in this particular section of it due to the lack of actual written archives for that point in time, giving you the opportunity to rub elbows with some legendary figures like the sons of Ragnar Lothbrook and even play around with the stuff of myths like say, oh, Thor’s hammer? It wouldn’t be a viking game without any reference to that, right? Even God of War got around to it, so why not Assassin’s Creed. All in all, Valhalla so far has been fantastic in that regard, and considering how much more I enjoy this mythic canon than the Greek pantheon in Odyssey, I can say for sure that it’s yet another part in the new game that’s been trumping the previous wholeheartedly.

The viking theme is also put to great use in the overall progression of the game through the way you acquire materials to spend in your plot of land when you eventually reach jolly ol’ England. Raiding is a major part of Assassin’s Creed Valhalla, and much like all other gameplay mechanics in the game, you can activate one with a mere touch of a button by selecting it from a radial menu. So you might find yourself rolling into an unsuspecting village and think of yourself as strong enough to take it. And if you indeed are, blowing a horn calls in your strongest warriors that zip in on your longboat to do your bidding.

That leveling was probably my only real issue with the previous two modern entries in Assassin’s Creed, and while it’s still present in Valhalla, it feels more manageable. By spending points in a number of ever-growing skill trees, your overall character strength level grows, allowing you to take on stronger locations within the map, which are conveniently noted now.

For the limited time that I’ve spent playing the game up to now, my growth has felt more natural, and while still hella gamey, it’s a good way to implement it instead of simply gating you behind it for quests like in Origins, simply kicking my ass for daring to take on a guard who’s only a level or two above mine. Sure, there are still occasional moments where I bump into high level enemies here and there, but they are off in the world in spots I had no business reaching at this point in time and totally my own damn fault for doing so.

I’m positively excited to keep chipping away at Assassin’s Creed Valhalla in the coming months. So far, it’s been an amazing experience that’s built upon what was great about what came before it, doing away with most of what was annoying about playing an Assassin’s Creed. Yes, there are a few issues related to it being an open-world game that naturally pop up, like bugs every so often, or slowdown in the case of my rapidly aging PC, but these pale in comparison to the overall win that Valhalla is despite everything that Ubisoft’s been getting rightfully pecked at for.

Hopefully the scrutiny that the company’s been under lately will lead to a better work environment for its thousands of employees and can eventually open up the way for folks like us to report how excellent any future games might turn out, and gladly do so without the ugly side of development popping up. Is that a feasible possibility? Who knows, shining a light onto these shameful practices is a strong step towards not only better development environments, but also more rewarding results to years of work that these artists endure in order to bring us joy. Now that’s something to drink to. Skål!