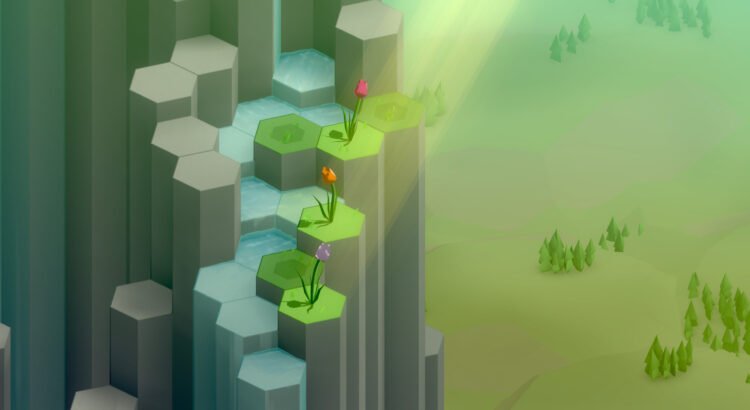 Puzzle games are often a bit of a gamble for me. For as calm and meditative as they are, the actual process of working out solutions is… less so. For each puzzle I can solve without much issue, I always inevitably reach a point where I can’t figure out what the solution is and eventually either have to bring up a walkthrough to help me through it step by step or just give up altogether. Makes picking up one a bit challenging sometimes since I have to be in the right mindset to really engage with them given they tend to be long-term projects.

Spring Falls is a puzzle game about water, erosion, and growth. Available on Itch, Steam, and iOS, it’s a lovely little game wherein you’re altering the rocky landscape to create pools of water to help flowers grow and bloom. I loaded it up on a whim while looking for something quick and simple to unwind with and ended up playing through most of it in one sitting, which, I mean — if that doesn’t say something about its quality, I don’t know what would.

Each of the game’s 60 puzzles involves you tapping on rock tiles to make them erode to build pathways for the water to flow through, or pools in which to hold it, depending on the level and its particular quirks. The goal is to alter the space in such a way that the grass can spread until it reaches each of the flowers, allowing them to bloom. Doing so is very easy and straightforward for a while, the solutions presenting themselves almost as soon as you load up the level. A bit surprising given how often puzzle games start to stump me very fast, but welcome all the same. Both because it helps the game’s peaceful nature — achieved in no small part due to its chill ambiance of light, relaxed music and the occasional sounds of nature piping up — and because it acts as a perfect way to ease you into the puzzle logic.

The game starts by having you transport set bodies of water around. Then it eventually adds active waterfalls that flood the area and drown any active patches of grass until the current stops or is routed elsewhere. Then patches of soil that sprout upward whenever the water reaches them, further spreading the growth of grass and flowers. Individually they each present different challenges, such as figuring out how to get the greenery to spread upward when the water only flows downward, or how to spread a couple small pools across a wide field. When all these elements are active in the same puzzle, it’s the closest Spring Falls gets to that feeling of “what am I even supposed to do here?” that’s so common in puzzle solving without actually crossing that threshold.

By the time the late-game puzzles arrived, I got stumped not because I didn’t understand what was being asked of me, but because I was simply making the wrong moves. When I inevitably had to look up solutions to get myself on the right track, I often found I had the right idea, just the wrong execution. I clicked these tiles first instead of those tiles; made a pool here instead of there: that sort of thing. A much better feeling than looking one up and finding out I was completely off-base.

It’s a small thing, but getting through most of the game without needing to consult a guide was nice. As much as I love puzzle games, I’m not often able to parse what they want me to do (maybe because I lack the aptitude for them). That Spring Falls was short and easygoing enough that I could breeze through most of it without getting utterly stumped throughout was a nice surprise.