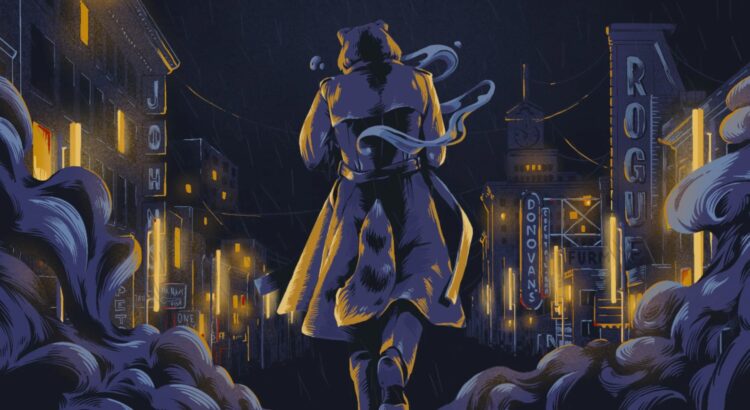 I’ve been to Vancouver once, although it was a long time ago now. I was only a kid at the time, so the memories of it are starting to become hazy to me. But I know we got met at the airport by an old guy named Alf, who drove us to the house we’d be staying at in an old-fashioned Rolls Royce (quite a treat for 11-year-old me). I also remember that Vancouver was not populated by an assortment of anthropomorphic animals, although who’s to say that times haven’t changed. In Backbone, the newly released adventure game from developer EggNut, the animals rule the streets, but in the words of George Orwell’s Animal Farm, “Some animals are more equal than others.” The ruling caste of apes have formed a highly classist society where people are divided by status and money, and only those with the money and the lust for power are able to rise to the top.

You play as Howard Lotor; a bedraggled racoon private investigator with a chunk missing from one ear, who takes a case from a distraught wife who believes her husband is having an affair. So far, so standard. But upon investigating the nightclub where the husband regularly hangs out, Howard finds far more disturbing things are afoot, including criminal conspiracies, capitalist greed, murder and much else. The plot forms the central driving force of the game, and when accompanied by the excellent writing and the memorable characters, it is consistently entertaining and involving.

You may think having the main cast be animals would be distracting, but honestly after a while I almost forgot about it and just started viewing them as people. A major plot twist happens at the end of the third act which significantly shifts the story into a different gear, and I’m personally not sure doing so was entirely wise. The game becomes more unfocussed in the fourth and fifth acts and while they’re still highly enjoyable, the game ends fairly abruptly without proper resolution, seeming to set up the possibility of a sequel. The journey to the end is fully worthwhile, but it’s a shame they didn’t stick the landing.

The characters are all splendid. You can influence Howard’s personality a fair bit through your dialogue choices, but it’s clear he’s a kind but somewhat troubled soul, with a morose air of defeat hanging over him. He’s aided by friendly loudmouth beaver taxi driver Anatoly, plus inquisitive and determined fox investigative journalist Renee, both of whom you can learn more details about their lives and gleam more insight into their personality. There’s no voice acting but since the writing is so strong, character’s personalities are clearly demarcated. The secondary cast, such as principal villain Clarissa Bloodworth (a polar bear) or merchant bunny rabbit Po (or is it Mo?) are also very entertaining, and simply talking to characters always feels worthwhile, especially as the dialogue choices can lead to a variety of different routes through conversations.

Although this is essentially a traditional point-and-click adventure game in many regards, you navigate Howard around the environments by using the keyboard and interact with objects by pressing E. You can also sprint around by holding Shift. The benefit of this system is that it allows for several more action-oriented stealth sequences where you have to hide from guards. These could have been frustrating, but thankfully all of these sequences are short, easy and will not penalize you if you fail, allowing an instant re-try. You also have an inventory but you don’t need to actively manage it, Howard using items only when he explicitly needs them.

Visually, Backbone may be the single best looking adventure game I have ever seen. Although on the surface it’s reminiscent of pixel art games like Lamplight City, it is much more detailed. It is staggeringly beautiful, occasionally leaving me to just stop and pause to soak in the heavy atmosphere. Vancouver is gorgeous in it’s post-noir, neon-tinged decay; the 2D animated, pixelated characters merging seamlessly with the 3D animated background and foreground elements. Hopefully the screenshots I’ve provided here do it some justice, but it must be seen in motion to truly get the full effect; the rain pattering on the wet pavement as Howard slinks along the side-walk, the jumbled assortment of overground apartments and tenements in West End, the high-tech glory of the Science City Museum. Likewise I would be remiss not to mention the Jazz soundtrack which beautifully brings the film noir atmosphere to life; it’s most reminiscent of something like L.A. Noire in some places, but also includes some wonderful folk songs to switch up the atmosphere a bit.

Backbone is about the length of a traditional adventure game clocking in at about 4 hours, meaning it can be finished fairly speedily if you’re not pausing to soak in background characters and additional lore (which you absolutely should be). But that shouldn’t be considered a knock against it; despite the brevity, Backbone has one of the most fascinating and rich settings for a video game I’ve visited in years, and it left me craving even more. I want to see what the Docks are like and visit other areas of the city, and I definitely want to know how the story plays out going forward. The plot raises a lot of questions, and remarkably few of them are satisfactorily answered by the end. There’s so much potential here that I seriously hope EggNut are able to begin work on a sequel as soon as practicable. Backbone is a gorgeous, well-written and fascinating adventure game, and while the plot twist may not be to everyone’s taste, it sets up a huge variety of options for where things could go in future. On its own merits it’s extremely smart and deeply stylish, and for adventure game aficionados I would consider it a must-play.