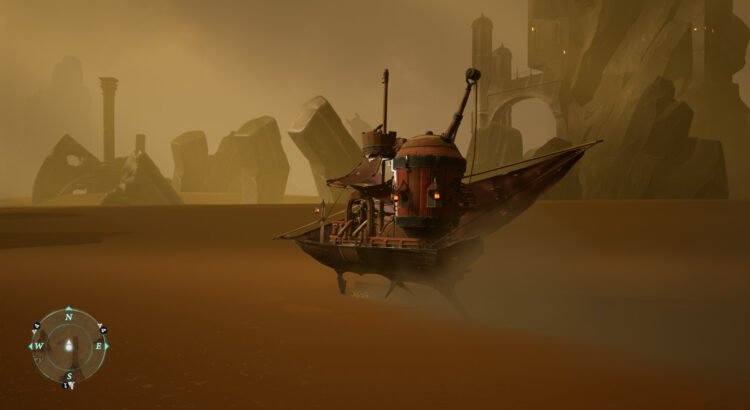 Any longtime reader will probably know that we here at Entertainium are big fans of the Souls games and those inspired by them. You got a Souls-like (or “Souls-lite,” in this particular case)? I’m in. Sands of Aura from developer Chashu Entertainment is the newest project to take on the genre and based on what I’ve seen and played, it’s looking promising.

Sands of Aura is set in a world covered in sand that you travel across via boat. The demo was set on one of many islands you explore. Right off the bat, its inspirations are very clear. Bells act as your main healing items, which are restored every time you return to a larger bell that serves as your checkpoint. (Bells are important in this world.) Resting there revives all enemies and fully restores your health. You have a stamina meter that depletes when you dodge — though not when you attack, notably. There’s even a central hub you return to for leveling up and such that slowly becomes populated over time. Plenty of the usual staples of Souls-like design.

The demo began by dropping me off on an island with all the materials I needed to craft myself gear. Rather than finding pre-made weapons in the world, you craft them from scratch. Weapon creation is very detailed. You select four parts of the weapon — the hilt, the type of blade/blunt object you want, the pommel, and “style” — each influencing the weapon’s attributes. The kind of weapon you create depends on the type of blade and handle you use, both parts dictating its basic abilities. For instance, I made a twin-bladed weapon that has a chance of all attacks hitting twice, could partially cleanse itself automatically every five seconds, had increased critical damage, and could reduce enemy armor.

When the dev team was walking me through the demo, they happened upon a very strong build entirely by accident. They chose a one-handed axe, which deals increased critical damage, and paired it with a regeneration pommel, thus restoring a small bit of health every second. Combined, it meant they could just maneuver around the enemy and hit them from behind for huge damage and keep themselves alive without having to draw upon their bells too much. It made dealing with most of the enemies trivial — provided they could consistently get in position for those crits.

Critical attacks aren’t something that happens purely by chance here. Attacking foes from behind (backstabbing, if you will) will always inflict higher damage. Combat then encourages you to play around your foes movement’s to make the most of chances to strike rather than just face them head-on, an easy habit to fall into when attacks don’t cost stamina. I often tried to rush down foes and constantly pummel them before they could do anything, but that didn’t work often enough to rely on. Dashing behind them and getting some hits in while they turn around always worked better.

Combat has the expected sort of weight to it that you’d expect. The guard/parry action feels a bit slow, such that it’s hard to tell when it’s active. The isometric perspective gives you a good view of the action, but as a consequence, there’s no lock-on function, so you have to be aware of what direction you’re facing to avoid taking any critical attacks yourself.

Instead of traditional sort of durability where weapons will break if not given proper upkeep, you instead have to “cleanse” them to maintain their damage output. Failure to do so greatly reduces the damage you deal until you take a moment to cleanse them. Thankfully it’s a fast process. It’s just a single button press away, and can be done while moving. It’s an interesting system since it adds a different layer to consider while in combat. It’s a fun spin on the standard Souls-like approach since you have to find the time to cleanse your weapon instead of just looking for a safe moment to heal or your moment to strike.

For the most part, the combat felt pretty in line with what you’d expect from the genre. The challenge hit the right spot of being just challenging enough to keep me on my toes, but so overwhelming that I couldn’t get anywhere. The boss fight was only part where things got very tricky — mostly due to the fact that the boss can heal herself — but it also acted as a good example of how it feels against more hardy opponents. The boss, an armored figure named Alaira, was fast and had some powerful projectiles. Any attempts to get some distance would never last long due to her either firing waves of energy or dashing in quickly after me. With how I could only get a couple of dodges out before my stamina was depleted, I had to stay close and just try to avoid her attacks as best I could. It was a tough fight, but a satisfying one.

The demo had a couple side-quests to take on as well, but I wasn’t able to make any progress on them. Chalk it up to the island being big or the lack of any sort of clear markers of where to find your objectives, but I wasn’t able to figure out what to do. My suspicion is that I simply didn’t reach the right part of the area (there were a few spots I saw that seemed accessible, but I hadn’t means to do so). After all, the place is pretty big.

Sands of Aura is currently set to launch in Early Access on Steam later this year, with a full release expected to follow in early 2022.